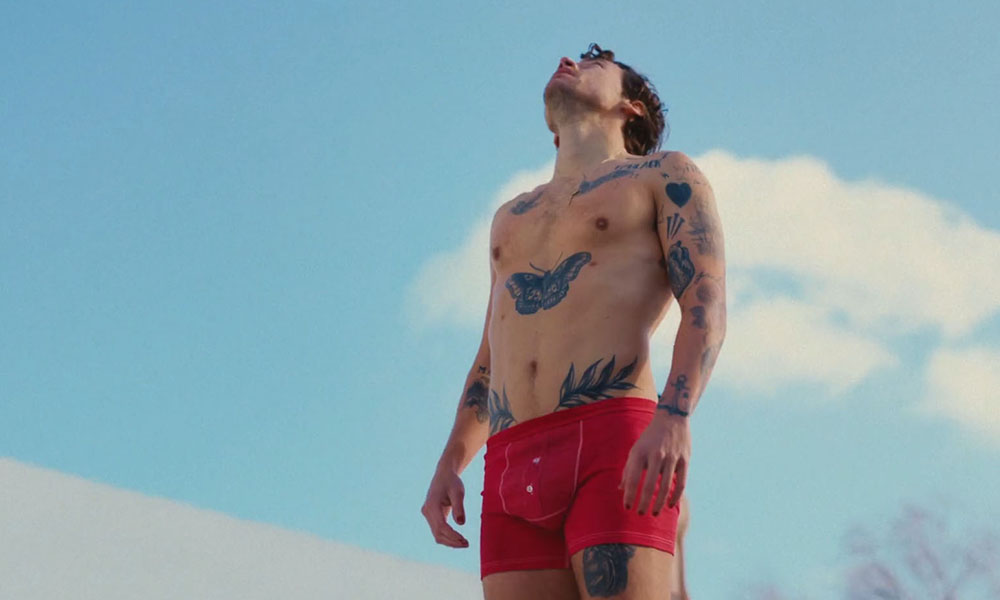 “I’d never done that before. On camera at least.”

Harry Styles is back to releasing new music and teasing his third studio album, “Harry’s House,” but that doesn’t mean he’s putting his acting career on the backburner.

The 28-year-old has already made a name for himself in cinema for his appearances in Christopher Nolan’s Dunkirk and Marvel’s Eternals. Later this year, Styles will return to the big screen in Olivia Wilde’s thriller Don’t Worry Darling with Florence Pugh and Michael Grandage’s adaptation of My Policeman with Emma Corrin and David Dawson.

Both films have earned an R rating for sexual content as Don’t Worry Darling reportedly has an intense sex scene between Pugh and Styles focusing on female pleasure, while My Policeman will put Styles in multiple nude, gay sex scenes. Further confirmation that you should not bring your parents to the movies.

Though Styles promised confidentiality about his appearance as Starfox in the Eternals credit scene, he seems to be more willing this time around to share secrets about his upcoming roles. Including how they filmed the sex scenes and how comfortable he felt doing it.

While promoting his latest single, “As It Was,” Styles appeared on the Capital Breakfast Show with host Roman Kemp. When Kemp asked if he could bring his parents with him to the theater, the actor advised against it.

“I don’t know if you can watch either with your parents – I’m gonna have to do another one.”

There we have it. Confirmation from Styles himself of the rumored “saucy scenes.” As for how these scenes came to fruition, Styles said it was all very natural. AKA, there were no netballs like on the set of Netflix’s Bridgerton.

“I’ve personally had no experience with a netball. It depends very much on who you’re working with and what the situation is.”

“All I can say, from my experience, is that we were very lucky to have a trusting relationship with the people we were working with and that came first,” he continued. “It was all discussed and all of it was very ok, above the filming, above the camera, it’s me and you and we trust each other and at any point we can stop whenever.”

“I’d never done that before. On camera at least,” he joked.

The Mirror previously confirmed My Policeman will have two sex scenes between Dawson and Styles and one nude scene with Styles alone. We won’t spoil too much about the film, but fans who saw an early screening of the movie in March confirmed the movie will feature the actor’s bare bottom.

There is nudity …only arse cheeks 🙃

Harry Styles As An LGBTQIA+ Ally

Harry Styles has never backed down from an opportunity to shout his support of the LGBTQIA+ community. Literally. Remember when he took a Bi flag, got down on his knees, and screamed “freedom” in front of 10,000 people? Because we do. The Grammy-winning singer/songwriter also rallies against gender norms and encourages others to express themselves however they choose. His self-expression looks like sparkly jumpsuits, dresses, and colorful nail polish (which he now sells as a part of his nonbinary beauty line, Pleasing).

As far as his sexuality goes, the “Fine Line” singer has never publicly put a label on it. “It’s not like I’m sitting on an answer, and protecting it, and holding it back. It’s not a case of: I’m not telling you cos I don’t want to tell you. It’s not: ooh this is mine and it’s not yours,” he told The Guardian.