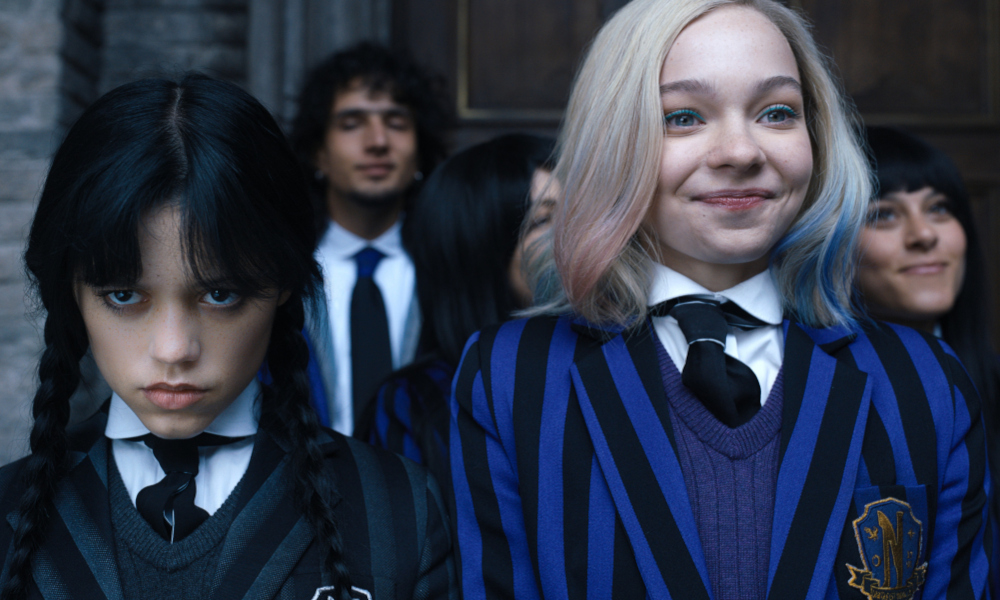 Will we see a queer couple in season two of Wednesday?

Since Wednesday premiered on Netflix, we’ve been fantasizing about living in the fictional world of Nevermore and counting the number of sassy, deadpan comments Wednesday Addams (Jenna Ortega) delivers in a single episode. Though the series has not confirmed a season two (yet), it did gain over 341.23 million hours of views in its first week and took Stranger Things‘ spot as the most-watched English-language series for the streamer. So, we’re holding out hope that it will return very soon.

Show Creators Talk About a Potential Spark Between Enid and Wednesday

In season one, Wednesday found herself in a love triangle between Tyler (Hunter Doohan) and Xavier (Percy Hynes White). But for the next chapter, fans are hoping the deadpan girl will fall for her spunky werewolf roommate Enid (Emma Myers). The girls had a rocky start at the show’s beginning, but they had captured all of our hearts by the end. TikTok accounts have used their ship name Wenclair as a hashtag over 1.4 billion times. But one question still remains: Will we get to see a queer relationship in season two? According to show creators Al Gough and Miles Millar, the answer is maybe.

“As Al said, this idea of sisterhood is key to the show,” Millar told The Hollywood Reporter while speaking of the audience’s reaction to the two characters. “We’re not gonna discount anything, and, obviously, sometimes characters reveal themselves, which is the fun thing we love about television, that it’s an organic journey. We have a roadmap, and we’d like to have routes along that map that take you in unexpected directions. So, we’re open to everything.”

Millar says nothing is set in stone, but Enid and Wednesday have a lot of friendship development to get through first. “We wanna explore that friendship in every way, but we’re not gonna be, this is where you sometimes get misdirected by fans and things like that, so it’s just being really open to see how those characters develop and that friendship. As Al said, that friendship is key to our sort of vision of the show.”

Emma Meyers and Jenna Ortega Ship Their Characters Together

Speaking to Gayety’s own Caitlynn McDaniel, Ortega commented on why Wednesday is the ultimate gay icon. “I think because she’s a badass. She’s cool, she’s got a nice sense of style, but she’s somebody who embraces her differences and isn’t out to please anybody. And I feel like that’s a really, really powerful thing to see.

As for whether or not Ortega ships Wenclair, the answer is yes! To Pride, the Scream actress said in a perfect world, they would be together. She also revealed to MTV News that she is not rooting for Wednesday and Xavier. “Now that Tyler’s off the table, I feel like she’s off of boys for a while,” Ortega said. “I feel like [she] and Xavier are just getting to a safe place. I think there’s an opportunity there for a really sweet platonic relationship.”

Emma is also team Wenclair and said she and Ortega would often joke on set about the chemistry between their characters. According to Elite Daily, they would find themselves quoting the Vine “And they were roommates.”

“Jenna and I would say that all the time to each other,” Emma told the outlet. “And that’s all that needs to be said — I think that gets the message across.”

We don’t know what the future will hold, but you can stream the entire first season of Wednesday on Netflix.