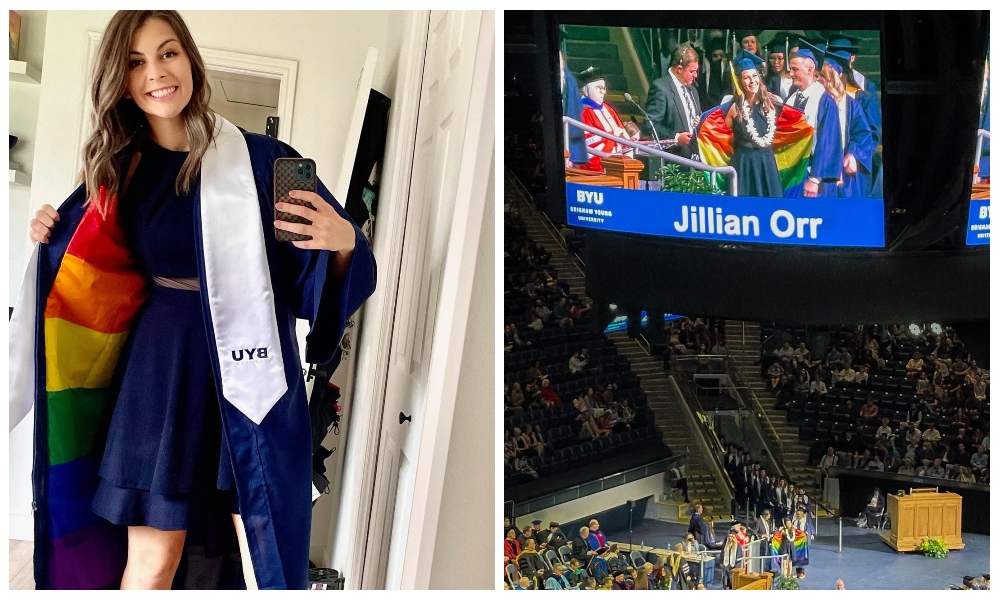 A queer BYU student condemns the university’s anti-LGBT policies and wears a rainbow flag to graduation.

Like many religious colleges, Bringham Young Univesity, a Mormon school in Provo, Utah, has a rigid outlook on gender identity and sexuality. But in recent months, these outdated views have provoked criticism from progressive students and members of the Mormon community.

BYU attendees like Charlie Bird have recently opened up about their experience as gay students and active Mormons attempting to reconcile their religious affiliation with their sexual identity.

Related| BYU Mascot Comes out as Gay in Revealing Op-Ed

Bird explains the school has a strict honor code that prohibits same-sex “romantic behavior” and requires students to “live a chaste and virtuous life, including abstaining from any sexual relations outside a marriage between a man and a woman.”

During his time at BYU, Bird, who acted as the official cougar mascot, said, “People love a gay Latter-day Saint until they’re actually gay.” Many gay Mormons share a similar sentiment.

Now, we see more LGBT members of the Latter-day Saints coming forward and coming out — members like Jillian Orr, a psychology major from BYU, who made her queerness known during her graduation ceremony.

Orr, who identifies as bisexual, said she “came to the realization that this is who I was, and it was beautiful.” Before her official graduation walk, Orr had a rainbow flag sewn into her gown’s inner lining, which she proudly showed off while accepting her diploma.

The graduate posted a video to TikTok showing off the gown with an explanation for her actions.

She captioned the video, “At BYU, it’s against the Honor Code to be in a homosexual relationship. If you are discovered to be dating or just holding hands, there are severe consequences. They threaten to take away your degree and kick you out of the university. Students are afraid to be who they are, so they hide out of fear until they get out. I will not hide. I will be seen. In front of the entire school.”

An act of rebellion or defiance, maybe. But certainly an act of self-love and acceptance! Congrats to Orr and all other Mormon church members who come out to live their life authentically. We support you!