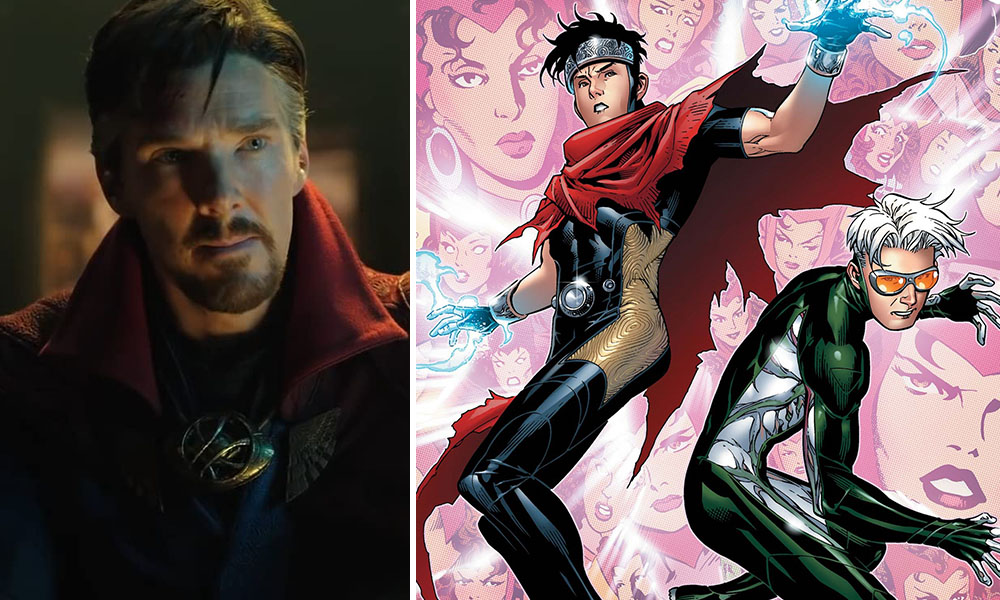 Fans can finally let out that breath they’ve been holding.

The finale of WandaVision left us all in tears last year, wondering what was next for our beloved Scarlet Witch and what would become of her twin sons, Tommy and Billy? We know the boys were part of Wanda’s Hex and cannot exist outside Westview. Or so we thought.

In the series finale, Wanda decided to let go of Vision and her boys when she brought down the Hex. But in the post-credit scene, Scarlet Witch is seen studying the Darkhold when she hears the distant cries of Tommy and Billy. Do they exist in a different dimension? Are they in danger?

Answers to these questions and more may be on the horizon as the twins made a brief appearance in the new teaser for Doctor Strange in the Multiverse of Madness.

Fans got a chance to see the twins in action towards the end of the WandaVision series as they discovered their powers just in time to help their parents fight the S.W.O.R.D. Agents. We’re hoping the confirmation of their return means we’re one step closer to seeing them blossom into the queer superheroes we know they can be. Billy becomes the gay superhero Wiccan, and his brother Tommy grows up to be the bisexual hero Speed.

The twins are not the only queer characters making their debut in the MCU. America Chavez is also a member of the Young Avengers and of a female-driven group of Avengers known as A-Force and the Ultimates. Chavez, played by Xochitl Gomez, first appeared in a blink-and-you’ll-miss-it scene during the end credits for Spider-Man: No Way Home. Though her exact role in Doctor Strange is still unknown, she will likely play a key part in the plot as she appears at the front of the recently released movie posters.

Check out this exclusive RealD Poster for Marvel Studios’ #DoctorStrange in the Multiverse of Madness. Get tickets now to experience it only in theaters May 6.

In the comics, Chavez is a lesbian superhero who has superhuman strength and speed and can open portals into other worlds by punching the walls of reality. She will fit right in alongside Doctor Strange and Scarlet Witch. Though Disney confirmed Chavez’s sexuality by including a rainbow pin on her jacket, we hope to see more representation as her plot progresses.

See the start of the Young Avengers in Doctor Strange in the Multiverse of Madness in theaters May 6.