Some of you may remember him from his antics on Men of West Hollywood earlier this year. Others may recognize him from his stint as Mr. International USA in 2019. Perhaps it’s his appearance in Paradise Hotel that very same year. If none of these ring any bells, you can still get to know David Barta right now on MTV’s Ex on the Beach. Pretty intimately too, we might add. In the very first episode of reality show’s fifth season, Barta surprised audiences when he came out as pansexual. 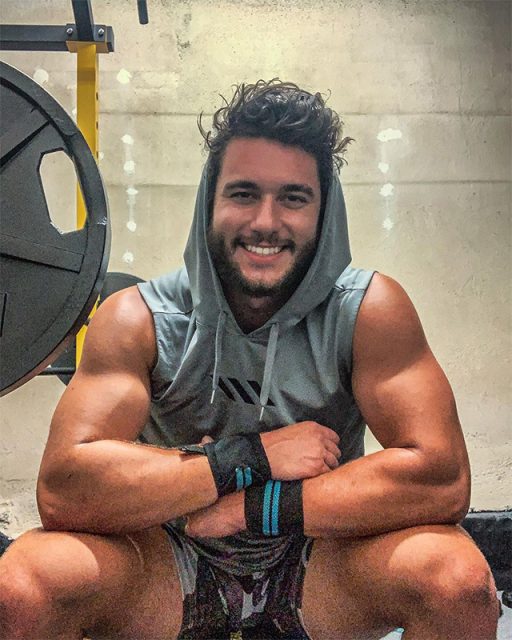 Growing up in a conservative Baptist Christian household, Barta initially got his start as a baseball player. He later entered the field of fitness and modelling, for obvious reasons. From there his journey took him to Mr. International and shows like Paradise Hotel. It was his appearance on Men of West Hollywood, a show about six men in West Hollywood navigating the relationships in their lives, that first caught our queer attention.

While we were gushing over clips from the show early this year, Barta was just emerging from a difficult period in his family life. He had just come out. In a post on his (privated) Instagram, Barta spoke about coming out to his religious family. “You could all imagine what a shock it was coming out to my family in September of 2021,” he said. “I had never shared my feelings about my sexuality with until then. Between my family and I, the following 3 months were some of the hardest we had ever gone through.”

Coming out as Pansexual on TV was definitely the hardest thing I’ve ever done, but I feel happier and more free than ever 🌈 just posted my full story on my IG. Love you all and can’t wait to share more soon ❤️✌🏼

Luckily, his family appear to have come around. “As time has passed, my religious family has come to understand me further and more intimately as we love each other more than ever.” In his post, Barta makes it clear that he is still the same person he was before. “Above all these titles, I’m just David,” he says, underscoring the importance of his identity beyond labels. “I’m still the same exact person, just a little more honest and open to what life has in store for me.”

Related | Omnisexual vs Pansexual: What Is The Difference? 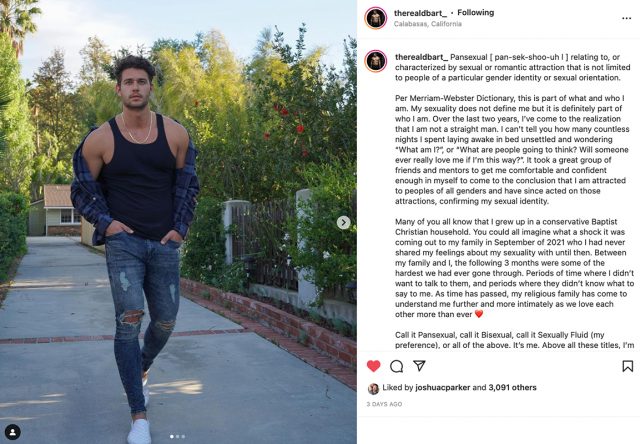 If you follow Barta on TikTok you may have noticed the hearthrob subtly teasing the news to his followers. Fans have speculated the meanings behind some of his recent videos, including one where he references a conversation he had with “a family member about 7 months ago”. In the video he dramtically reenactes the conversation, with quotes like “how long have you known?” and “why didn’t you tell us?” Anyone who has come out will be very farmilar with that line of questioning.

Barta says he couldn’t speak on it sooner as a result of a non-disclosure agreement with MTV. “I haven’t been able to speak my full truth because of the NDA for my show,” Barta wrote on one post. “I’m looking forward to speaking it next week.”

Ship on the Beach

Back to Ex on the Beach, and the moment that led Barta to his coming out. The current season of the reality show is full of LGBTQ+ representation. This includes gay men Joelle Brian and Jonathan Troncoso, bisexual women Kyra Green and Emily Salch, and trans woman Arisce Wanzer. Then there is Mike Mulderrig, who doesn’t typically identify with labels but for simplicity’s sake uses bisexual.

During the first episode of the show Mulderrig talks about some light flirting between himself and Barta through the years over DM. Mulderrig passed it off as harmless fun, not something that could possibly turn into anything. Little did he know that Barta was exploring his sexuality, and found himself attracted to Mulderrig. Barta says on the show that Mulderrig was the first guy he was attracted to. At the end of the episode, Barta and Mulderrig even shared their first kiss.

The shipping has already begun in earnest, and we’re hopefull that Barta and Mulderrig’s relationship will continue to deepen on the show. In the meantime we are so excited for this new stage in Barta’s life, publicly living his truth with the support of his family. If you’d like to keep up with him on his journey, check him out on TikTok. 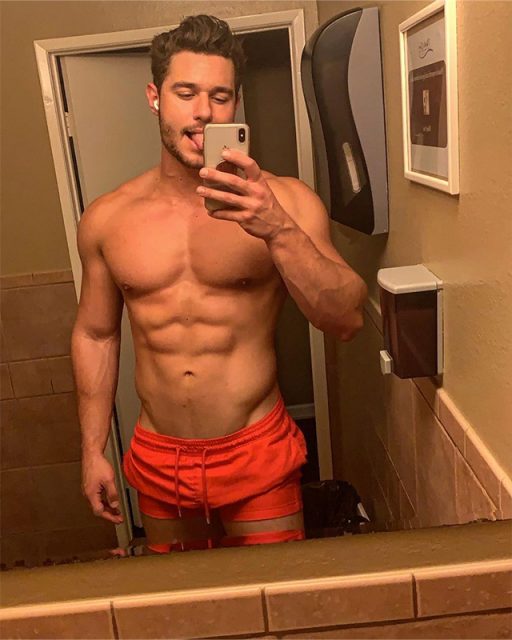 Watch Ex on the Beach Thursdays at 8pm ET/PT only on MTV.