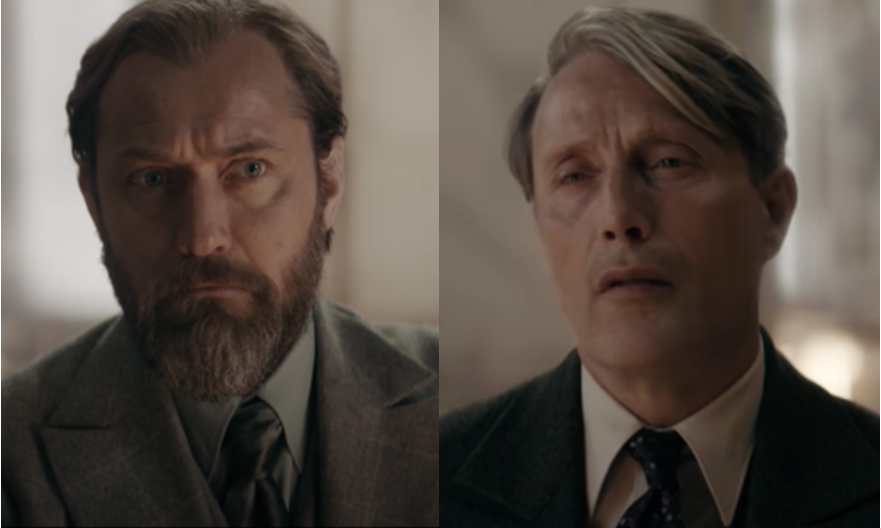 Dumbledore Says He is Gay in “Fantastic Beasts” Teaser

Albus Dumbledore confesses his love for Gellert Grindelwald in a new Fantastic Beasts: The Secrets of Dumbledore teaser.

Devoted readers have been waiting 15 years for the Harry Potter franchise to introduce an explicitly queer character to its long line of witches and wizards. Though there was some inclination that Dumbledore and Grindelwald’s relationship went beyond a powerful friendship in the books, it was J.K. Rowling’s confirmation of Dumbledore’s sexuality in 2007 that caused a real commotion in the fandom. But fans at the time still worried her declaration was a cop-out and would go unexplored in future films.

Fast forward to 2022. The Fantastic Beasts franchise is gearing up to release their third film with an authentic queer moment for Jude Law’s Dumbledore.

The clip for the new release shows Dumbledore and Grindelwald (now played by Mads Mikkelsen) having what appears to be a casual chat in a public cafe. Grindelwald tells the other wizard he plans to burn down their world with or without his help and asks, “do you really intend to turn your back on your own kind?”

Dumbledore says no. But the villainous wizard is quick to remind him, “It was you who said we would reshape the world. It’s what we said we’d do.”

“Because I was in love with you,” Dumbledore says. There we have it! A round of butterbeer for everyone, on me. If only it were that simple.

While some fans celebrate a win for the queer community, others have partially or entirely disconnected from the franchise because of Rowling’s stance against the transgender community.

The author first came under fire in early June 2020 for a series of anti-trans comments made on Twitter. Since then, stars from the franchise have taken a stand against Rowling like Emma Watson, Daniel Radcliffe and Katherine Waterston (Tina Goldstein in Fantastic Beasts).

It’s unclear whether or not the film will delve into the romantic relationship between Dumbledore and Grindelwald beyond this scene, but at least it’s canon now.

Fantastic Beasts: The Secrets of Dumbledore will premiere in theaters on April 15.

Dumbledore Says He is Gay in “Fantastic Beasts” Teaser