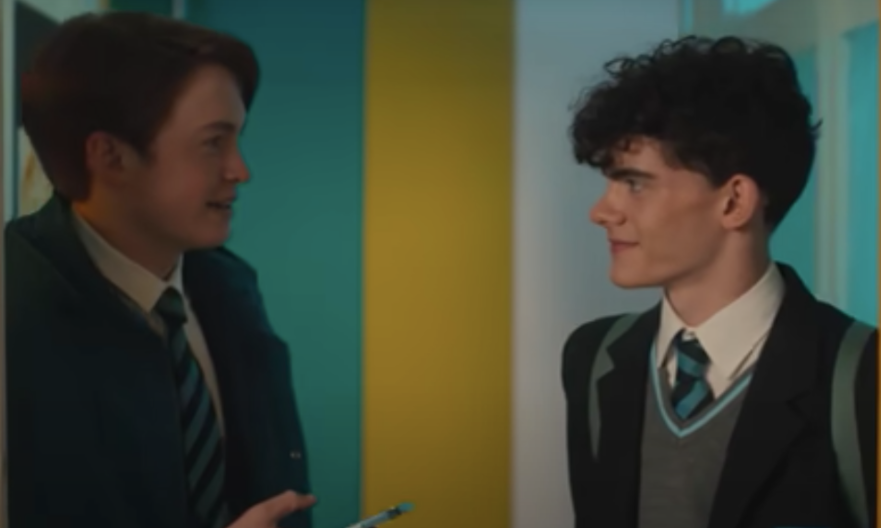 Netflix has released a teaser for their upcoming adaptation of the Heartstopper webcomic and already fans are obsessing over the similarities between the trailer and the original illustrations.

All About the Series

If you’re unfamiliar with the comic, Heartstopper is an LGBTQ+ graphic novel created by Alice Oseman. It follows British schoolboy Charlie Spring (Joe Locke) who sparks up a friendship with Nick Nelson (Kit Connor) the dreamy rugby player. But when Charlie starts to develop feelings, he’s left wondering if this is just friendship or something more.

Oseman is signed on to the Netflix project as program creator. This means its probably safe to assume the eight-part series will stay true to its roots.

The one-minute teaser introduces Charlie and his alleged “straight boy crush” on Nick while simultaneously overwhelming us with sweet boyish pining between the two leads.

Wait, Haven’t I Seen This Before?

Some observant fans on Twitter have already created side-by-side comparisons with clips from the teaser and scenes from the comic – further confirming that the series is shockingly accurate. As one user wrote, “We queer people just keep winning.”

THATS MY FAVORITE SCENE IN THE COMICS WHAT HEARTSTOPPER ON NETFLIX pic.twitter.com/kYyjNV7WyM

heartstopper panels that appeared on the teaser ; a very important thread pic.twitter.com/73ADdkv07D

The Search For Nick and Charlie

The full Heartstopper cast was announced last April after an exhausting casting period that included over 10,000 people auditioning for the show. While Connor has a few acting credits under his belt – namely the Elton John biopic Rocketman and the fantasy series His Dark Materials – Locke is new to the scene.

In a press release, Oseman said, “Nick and Charlie have existed as characters for almost a decade, and are two of my most beloved characters, so I was slightly apprehensive about the casting search, but I am so happy and excited that we’ve cast Kit and Joe.”

Heartstopper will premiere on Netflix on April 22.