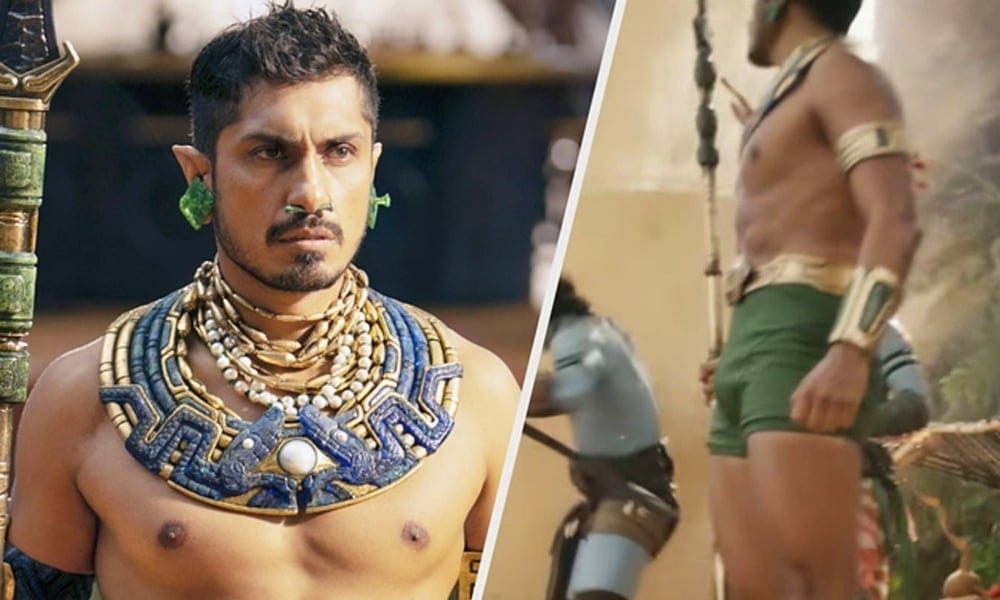 The Wakanda Forever actor is opening up about the bulge scandal. “The only thing that I can say is…”

This year, Disney gave Marvel fans an early Christmas present in the form of a hunky-new aquatic villain to obsess over. Tenoch Huerta made a splash in the franchise as Namor, the Sub-Mariner who rules an underwater kingdom. Ever since the trailer for Black Panther: Wakanda Forever dropped, fans have been eager to see more of the Maya-inspired antihero. Dressed in shimmering booty shorts, Huerta definitely delivered.

But a new rumor on Twitter has fans wondering if they were gypped of seeing more of Namor. In other words, did they edit out his bulge from Black Panther: Wakanda Forever?

Users online shared side-by-side photos of Huerta on the film set and claimed that one was before editing and one was after. The photo that is said to be taken pre-editing shows the actor with a prominent bulge while the other … does not.

GIVE NAMOR HIS PENIS BACK pic.twitter.com/t5cdrtf0HC

So what happened? Did Marvel execs really choose to edit Huerta’s bulge or are the photos fake? Luckily, The Forever Purge actor is not one to shy away from questions about his body.

Related | Matty Healy Makes Out With Male Fan On Stage

“The only thing that I can say is: the original was the photo in the right. Without [the bulge]! That’s original,” Huerta told Rolling Stone. “No, I mean, I’m not going to lie to people. Every man in the world, we have fragile masculinity, but not in that issue. I will say, the right one, the real one is the photo on the right.”

Take it or leave it. You can see Huerta as the hot antihero in Black Panther: Wakanda Forever now in theaters.

Wakanda Forever faced criticism online after the long-awaited queer storyline between Aneka and Ayo was nothing more than a kiss on the forehead. LGBTQ+ fans rejoiced when actor Michaela Coel said she accepted the role in the sequel because of the character’s queer storyline.

“My focus on that element was very singular… It was about what I represent in Ghana and putting my feet in the shoes of a queer character,” she told PA Media. But the love story between two Dora Milaje soldiers barely made it on screen.

“How are they going backwards when they have so little representation, to begin with,” said film critic and YouTuber Grace Randolph.