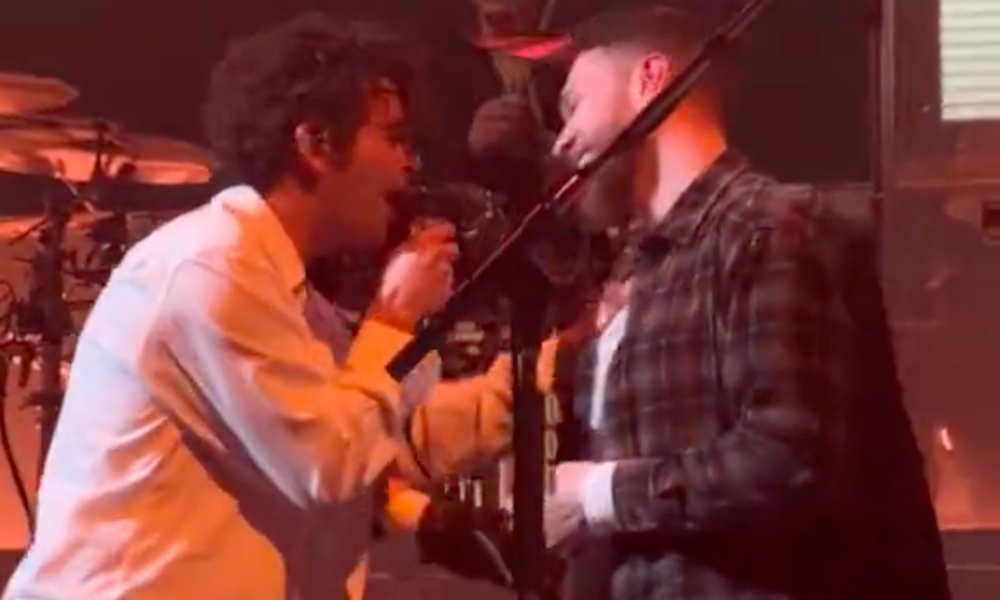 Matty Healy Makes Out With Male Fan On Stage

The 1975 frontman Matty Healy is making headlines for kissing men silly on stage.

This is not the first time Matty Healy has kissed a man on stage – and it likely will not be the last. The singer’s habit of bringing fans up on stage for a snog dates back to 2014. But during the recent North American leg of their “At Their Very Best” tour, Healy returned to his old antics. In Vegas, the British star pulled a woman up on stage and danced with her before sending her off with a kiss. Then in San Diego, another lucky fan went home with a kiss.

The moment happened while the band performed their 2013 track “Robbers” at the Cal Coast Credit Union Open Air Theatre on November 26. Healy once again brought a lucky fan on stage, where he intimately danced with him throughout the song before going in for a steamy kiss. The fan was left in a trance (who can blame him?) and received one last peck on the lips before he was sent over to security to return to his seat.

Healy notably kissed a male fan in the audience during a show in Dubai, where homosexuality is punishable by up to 10 years in prison.

“Thank you Dubai you were so amazing,” the singer tweeted that night. “I don’t think we’ll be allowed back due to my ‘behaviour’ but know that I love you and I wouldn’t have done anything differently given the chance again. But who knows maybe they will let me back in let’s just wait and see.” The band reportedly checked in with the fan Healy kissed and said he was “safe and having the best night of his life.”‘

Matty Healy Opens Up About His Sexuality

Though the singer is a proud LGBTQ+ ally, he does not identify as a member of the LGBTQ+ community. In 2019, he opened up to Attitude about his sexuality and childhood.

The first kiss Healy ever witnessed as a kid was between two men. “They were mum’s mates, who were dancers in a show.”

Healy is the son of actor Tim Healy and Coronation Street star Denise Welch. He credits his open-mindedness towards sexuality to his parent’s friends.

“When I look back these are really formative experiences for people because it’s what you identify as ‘normal.'”

Matty Healy Makes Out With Male Fan On Stage