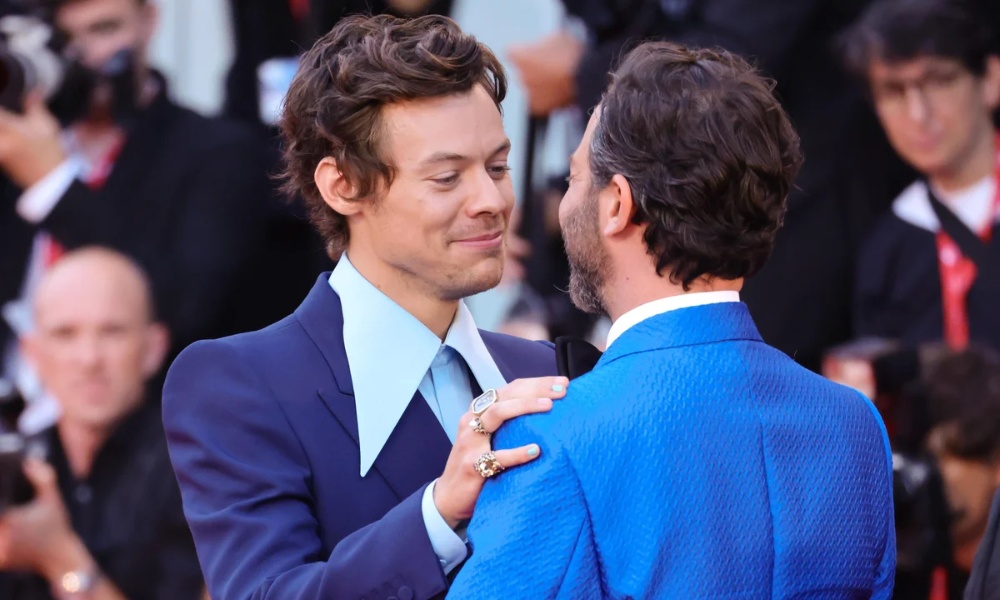 The Venice Film Festival is the world’s oldest and most prestigious festival. While many upcoming titles premiered over the Labor Day weekend, all the internet could focus on were the rumors (and memes) surrounding Olivia Wilde’s forthcoming psychological thriller, Don’t Worry Darling. And more specifically, Harry Styles‘ kiss with Nick Kroll.

The film’s actors all made a dazzling appearance on the red carpet on Monday evening. Did you see Florence Pugh arrive in that sparkly gown? We’re not mad she arrived late. At all.

After the premiere, the cast and crew received a four-minute standing ovation for the film. While the cast congratulated each other, Styles made a beeline for costar Nick Kroll, grabbed him by the sides of his face, and planted a big smooch on his lips. With giant smiles, the two men embraced and made their way out of the theater with their arms wrapped around each other. And the internet went wild.

harry styles staring at nick kroll’s lips but refused to even stand beside olivia. harry your gay is showing pic.twitter.com/wXsESRtjhB

me: mom i cannot right now harry styles just kissed nick kroll in front of his so called gf

The Premiere Gets Messy

This isn’t the only viral moment to come out of the Don’t Worry Darling premiere. And with so many rumors swirling before the film weekend, it’s not hard to see why. For anyone confused, here is a summary of what’s been happening over the last few years. Don’t Worry Darling originally starred Shia Labeouf as Jack alongside Florence Pugh as Alice in the Wilde directed film. While Wilde claims to have fired Labeouf, the actor has come forth with his statement and proof, saying he quit the movie. Then Styles came into the picture to play Jack, and shortly after production began, he started a relationship with Wilde. Fast-forward to now; the film is almost here! But Florence Pugh, the movie’s leading star, isn’t doing any press interviews. And Wilde and Styles aren’t even sitting next to each other.

Not to mention all of the memes swirling around about Pugh arriving late with an Aperol spritz in hand, Chris Pine dissociating during the press, and Styles saying his favorite thing about the movie is that it “feels like a move.”

chris pine sweetie i’m gonna get you out of there pic.twitter.com/iLVvjccskN