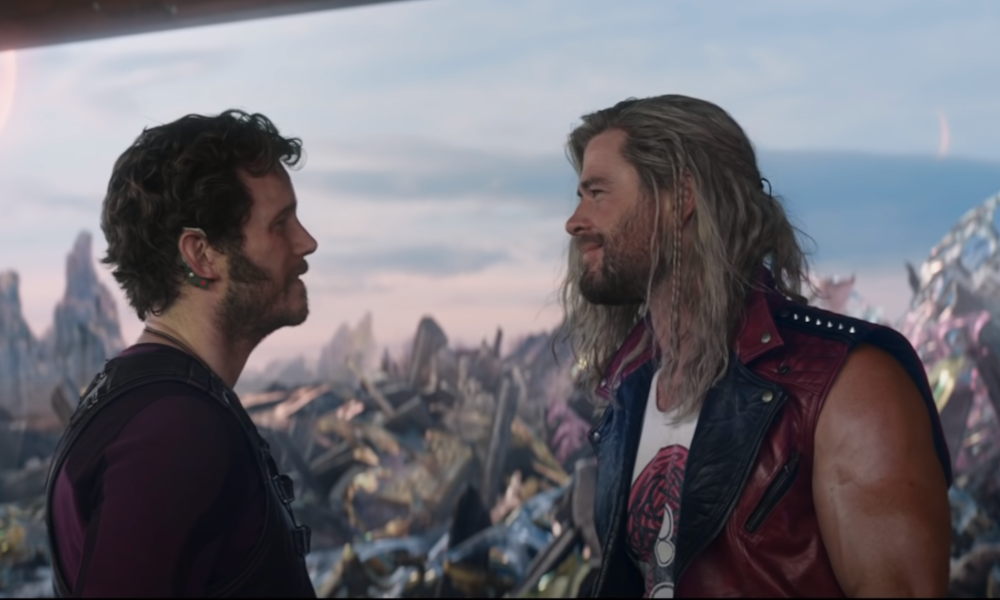 Why is Everyone Talking About Chris Pratt Right Now?

The internet is not a safe place for Chris Pratt right now.

After Marvel Studios released the first teaser for their upcoming superhero film, Thor: Love and Thunder, all anyone can talk about is the scene between Star Lord (Chris Pratt) and the God of Thunder (Chris Hemsworth). But why?

The scene takes place towards the end of the trailer when Peter Quill (Aka Star Lord) gives Thor some advice (likely tied to him leaving the Guardians of the Galaxy team to pursue a journey of self-discovery). Quill tells the long-haired God, “Remember what I told you. You ever feel lost? Just look into the eyes of the people that you love.”

Though Quill’s eyes are focused on his teammates, Thor can’t take his eyes off the man in front of him and moves around to try and meet his gaze.

“Not me,” Pratt’s character says, annoyed.

“What? Just listening,” Thor replies and then looks away.

Apart from a short monologue from Thor, the scene is the only dialogue we hear in the one-minute teaser. Is Thor flirting with Quill? Or is this simply a queerbaiting scene placed in the teaser by Marvel?

A 2020 comic confirmed Star Lord is bisexual, so a romance between him and the God of Thunder wouldn’t be too far off. Director Taiki Waikiki includes minor queer storylines in many of his films, like Jojo Rabbit, What We Do in the Shadows and the deleted scene in Thor: Ragnorok, which confirmed Valkyrie as a member of the LGBTQ+ community.

However, Quill and Thor have only had female love interests up until this point. And with the return of Thor’s ex-girlfriend Jane Foster and Star Lord’s determination to find the other Gamora, it’s unlikely the MCU will explore this pairing.

Why Is Chris Pratt Trending?

The small scene in the trailer has caught many MCU fans’ attention for another reason.

Here’s what’s happening. Pratt is a member of the Los Angeles’ Zoe Church with his wife, Katherine Schwarzenegger. The Guardians of the Galaxy actor has denied statements claiming the church is anti-LGBTQ, but many are not convinced.

Zoe Church is associated with Hillsong, a church that has made it very clear they do not condone same-sex marriage. “Put clearly, we do not affirm a gay lifestyle and because of this we do not knowingly have actively gay people in positions of leadership, either paid or unpaid,” senior pastor Brian Houston wrote in a 2015 essay.

Some fans speculated whether or not Pratt would return as Star Lord after the news of the character’s bisexuality broke, but it looks like he has chosen to reprise the role. On Instagram, Pratt expressed his excitement for the project, writing, “Showtime A-holes!!! So excited to finally share a bit of what the Guardians were up to down under. Thrilled to join Chris Hemsworth and Taika Waititi on this journey. Trust me it is going to blow you away. ”

Here’s what the Twitter aftermath looks  like after the release of the Thor: Love and Thunder scene between Pratt and Hemsworth.

chris pratt when he saw they have made starlord canon bi in the comic and taika was directing his next mcu movie pic.twitter.com/7se3TqIRxK

chris pratt after taika waititi told him he had to do subtley gay scenes with chris hemsworth: pic.twitter.com/qOdkSp1ucd

Why is Everyone Talking About Chris Pratt Right Now?