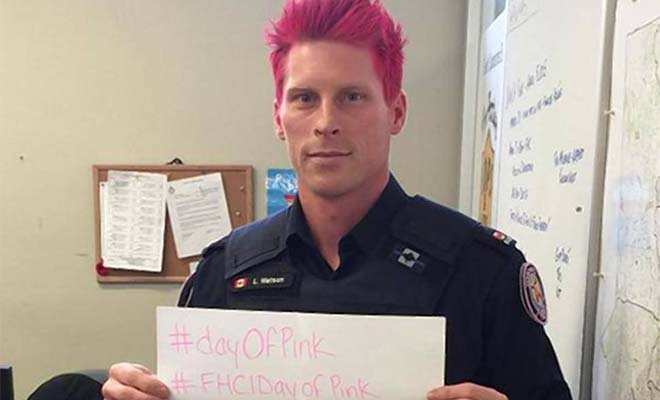 When Toronto police officer Luke Wilson decided to take a colorful stance against homophobia, he wanted to make an impact. So, he died his hair perky pink, and looked to Twitter for Support. A fellow officer featured Wilson in a Tweet holding a sign that read #DayOfPink, #StopBullyingNow and #FHCIDayOfPink.

Hey #Twitter if This gets a 1000 RT’s @pc8430 will keep the hair 4 a week #DayofPink #stopbullyingnow @TorontoPolice pic.twitter.com/2TGhGykfXe

To be honest, Wilson could probably rock any hair color and still look like a badass, but he looks pretty in pink. After earning more than 3,000 retweets on Twitter, Wilson promised to keep the pink hair for an entire week, and to continue the fight against bullying.

According to New York Daily News, Watson appeared at a Day of Pink rally at a college in Toronto. He was accompanied by fellow police offers wearing pink t-shirts under their uniforms. The event inspired some of the police offers to share their own bullying experiences in hopes of ending abuse and homophobia.