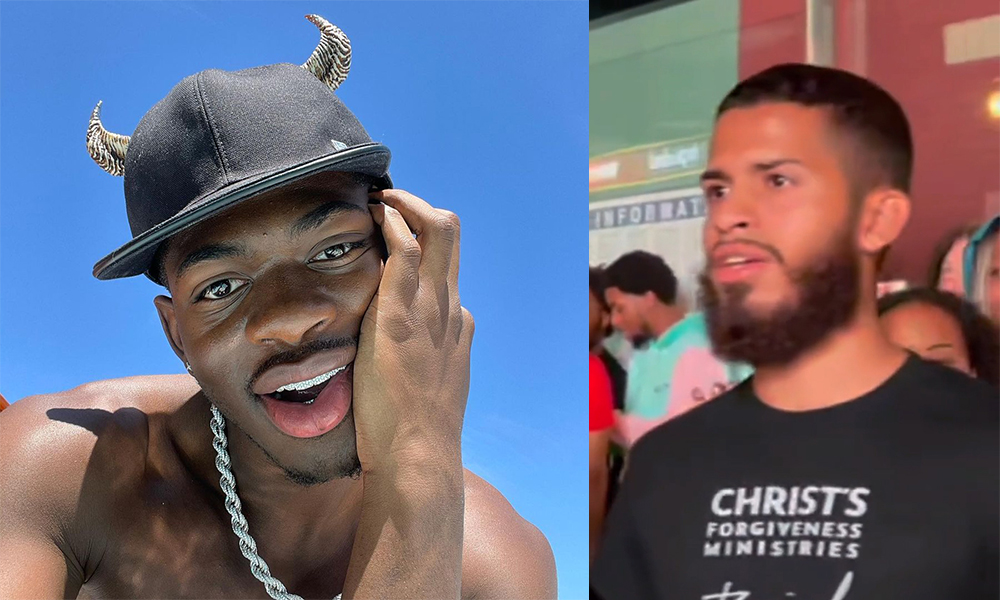 Lil Nas X is a blessing in this world. His talent, humor, sense of style, and personality have had far-reaching effects on LGBTQ+ youths today. Lil Nas X has reshaped the media’s understanding of what the music industry can look like, and in turn, made it better. He’s also incredibly busy right now. In true Lil Nas X style, the rapper has been getting a lot of attention recently. Most recently Lil Nas X had a run-in with anti-gay protesters.

Related | Lil Nas X Tweets His Most Scandalous Request Yet

The 23-year-old is currently on his Long Live Montero tour and documenting it all along the way. Meanwhile, Riot Games recently came forward to name him president of the League of Legends multiplayer battle game. “I’ve left my mark on pop culture in so many ways,” said Lil Nas X. “Now it’s time to take on the world of gaming.” Hilariously, the Grammy-winner’s first “decree” as president was to announce that “bottoms are no longer allowed to play” League of Legends.

as the new president of league of legends, bottoms are no longer allowed to play.

But making headlines just once in a week is not Lil Nas X’s style and, for him, every challenge is an opportunity. Most recently he decided to take advantage of a group of anti-gay protesters outside his Sunday night concert in Boston. The rapper reposted a video of the protesters on Twitter with the caption, “Just told my team to send them pizza, this is really good promo!”

just told my team to send them pizza, this is really good promo! https://t.co/ZUyh9peQuG

Sure enough, Lil Nas X later shared a video of his team offering free pizza to the hate group. Unfortunately for them, they declined, but something even more unexpected happened. Lil Nas X wasn’t ready to fall in love with an anti-gay protester outside his concert, but as you know the heart wants what it wants. The video captures a protester wearing a shirt that reads, “Christ’s Forgiveness Ministries,” over which Lil Nas X played Sufjan Stevens’ Mystery of Love. “Sadly one of the homophobes was really hot,” read the text on the screen.

Honestly, every day it becomes clearer. Lil Nas X is the blueprint. The answer to at least some small part of the mess that is homophobia. Next time you’re confronted with a homophobe, let them eat it.