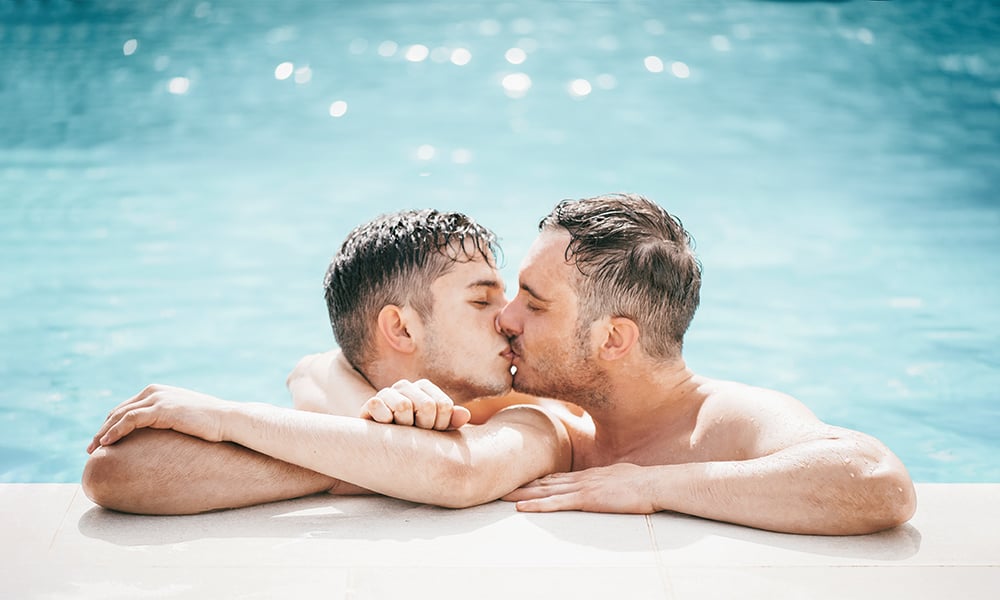 Are you looking to be out and proud in the Sunshine State? Then take a little trip to Fort Lauderdale, the Gay Capital of Florida! The Fort Lauderdale gay scene is one of the most welcoming in the country, and you’re sure to find food, fun, and fabulous accommodations all around the city.

Fort Lauderdale consistently tops the gay vacation destinations list, and for good reason! With a mind-boggling amount of gay bars, beaches, and bistros, you might not know what to check out first. Thankfully, this guide is your golden ticket to a fantastically memorable gay Fort Lauderdale vacation! 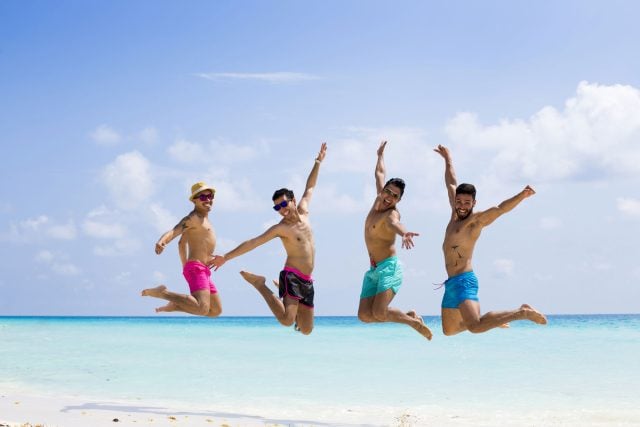 The Gay Capital Of Florida

Known far and wide as the Gay Capital of Florida, Fort Lauderdale has a long history of accepting and catering to the LGBTQ community.

One of the original hotspots for gay travel, Fort Lauderdale was home to a bunch of guesthouses in the 80s and 90s that allowed members of the LGBTQ community to visit the city in a safe environment. As gay guesthouses gradually turned into gay neighborhoods, Fort Lauderdale has become one of the most LGBTQ-friendly places in the United States.

Today, Fort Lauderdale is home to one of the highest concentrations of same-sex households in the whole country. Over 1.1 million LGBTQ visitors flood Fort Lauderdale every year, bolstering and supporting the more than 100 gay-owned establishments that pepper the beautiful beaches of the city.

From gay bars to gay beaches and gay brunch clubs, Fort Lauderdale has everything you could want in a gay vacation destination!

Every year, Fort Lauderdale holds an impressive amount of gay events. No matter what month you visit Florida’s Gay Capital, there’s always a spectacular event you can attend. 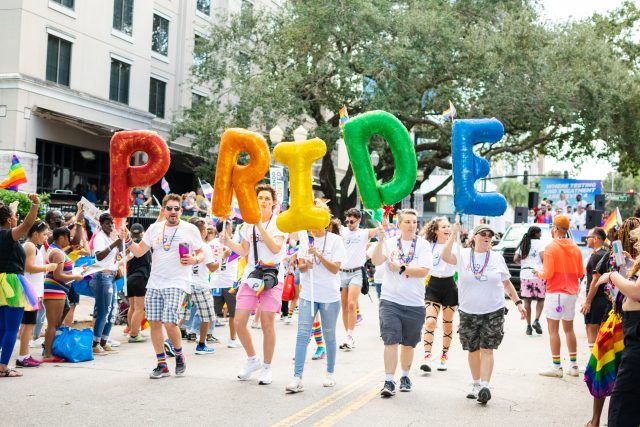 When Is Gay Pride In Fort Lauderdale?

If you’re more likely to spend your Pride Month in the Sunshine State, the Stonewall Pride Parade in nearby Wilton Manors is an absolute blast! Featuring tons of live entertainment including drag stars, gay comedians, and lots of live music, you’re sure to be entertained and feel connected to the community.

Put on your sunscreen and grab your favorite swan float, because FlockFest is the gayest beach party in Fort Lauderdale! FlockFest started in 2014 when a group of friends brought a bunch of swan floats to the beach just to have a bit of fun.

Since then, it’s exploded in popularity with hundreds of swan floats and thousands of partygoers rocking the beaches of Fort Lauderdale in July. Not only is FlockFest a honking good time, but it’s also a non-profit, meaning the proceeds from the event go to local charities in Florida. 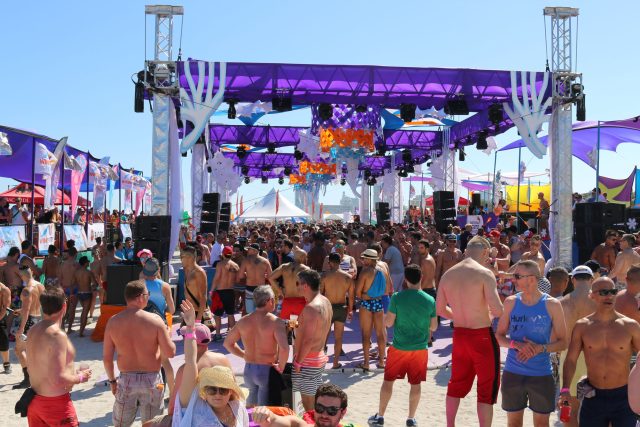 Whether you like heartwarming coming-of-age stories or laugh-out-loud gay comedies, the OUTshine Film Festival has something for everyone. A combination of the Miami and Fort Lauderdale Gay & Lesbian Film Festivals, OUTshine holds screenings of proudly LGBTQ films monthly, with a bigger film festival twice a year.

Want to OUTshine and chill in the comfort of your own home? You got it! OUTshine’s website has a library of gay titles ready to satisfy the gay film buff in you.

520 N Birch Road
While most hotels and resorts in Fort Lauderdale are now advertised as gay-friendly, Cheston House is one of the last strictly all-male guest houses in the city. Cheston House’s rooms look over the clothing-optional pool area, where you can find a fun guy to go skinny dipping with during the frequent evening cocktail parties. Being located just a stone’s throw away from the beach is a huge plus as well.

315 NE 16th Terrace
If you’re looking to live in the lap of luxury for a bit, look no further than Pineapple Point. With six buildings situated on a two-acre property, Pineapple Point is the very definition of a tropical paradise. With an army of staff to cater to your every whim, you can freely enjoy all of the wonderful facilities, which include a gym, lap pool, two jacuzzis, sun decks, massage studios, and of course, clothing-optional pools. Start the day off with a continental breakfast, and cap it off with the evening happy hour’s beer, wine, crackers, and cheese…all complimentary.

The Grand Resort And Spa

610 SE 19th St.
If you’re feeling a bit more adventurous, the Inn Leather Guest House might be the place to let your freak flag fly. Built “by leathermen, for leathermen,” this all-male guest house has a clear theme, yet manages to maintain a decent level of privacy for its clothing-optional pool.

If you’re feeling a bit peckish after the pride parade, here are some gay-friendly places to sate that hunger.

2449 Wilton Dr.
If you’ve got a hankering for burgers and brunch, Rosie’s Bar and Grill is a great place to be. Not only does this cute little burger joint have a killer Mac n Cheese burger, but it’s also one of the more popular hubs for the Wilton Manors gay community! Sunday brunch at Rosie’s is a see-and-be-seen event that lets you have some fun in a casual environment while interacting with the local gay community.

3049 Alhambra St.
In Fort Lauderdale, you can’t get much classier than the Casablanca Cafe. A beautiful beachfront dining experience awaits you, whether it be for a casual lunch or a romantic dinner experience. The Casablanca Cafe offers a fresh, tasty seafood menu that rivals any Michelin-starred restaurant. Arrive just before sunset and you’ll have the unique pleasure of seeing the sun sink below the horizon as you sink your teeth into a scrumptious piece of lobster.

1245 N Federal Hwy.
If you’re looking for some quality fare that won’t break the bank, J. Mark’s Restaurant is the place to go. Quaint but classy, this restaurant serves comfort food in a relaxed environment. While it’s not overly showy, J. Mark’s Restaurant has a focus on quality – quality food, quality service, and a quality atmosphere.

1421 East Oak Park Blvd.
Who says dinner and a show have to be two different things? If you want some drag to go with your dinner, Lips is your new favorite place. More of a dinner theater than a casual lunch spot, you’ll see lively drag performers both onstage and serving you. The fare is pretty good if a bit pricey because the cost of the show is baked into the menu prices.

The gay Fort Lauderdale party scene is lively, fun, and most importantly, diverse. With dozens of amazing gay clubs, Fort Lauderdale has something for anyone looking to have a good time.

2345 Wilton Dr.
If you want that hot, lively, sweaty nightclub experience, visit The Manor Complex on the weekends. This huge party and event complex has multiple rooms, a lot of bars, and a huge dance floor. You’ll get in for free, but the drinks are a bit on the pricey side. Live entertainment and frequent events make every visit to The Manor Complex a different experience.

1508 NE 4th Ave.
One of the best leather gay bars Fort Lauderdale has to offer, Ramrod is the place to go if you’re feeling a bit kinky on your night out. Ramrod is dark, sexy, and full of leather daddies. With a different gay theme every night, you’ll get drink specials if you conform to the theme. Pro tip: put on some bondage gear for Fetish Fridays and you might just bring home someone who’ll want to use it on you.

3073 NE 6th Ave.
Gay bars like Scandals Saloon bring the friendly, rugged atmosphere of the wild west to the sunny beaches of Florida. Enjoy cheap drinks and the occasional line dance while you chat up that cute cowboy with the five-gallon hat. The crowd here is usually on the older side, so if you want to make friends with some silver foxes, come on down to Scandals Saloon.

109 SW 2nd Ave.
If you enjoy the finer points of mixology and want a classy speakeasy to spend the evening in, Stache might be what you’re looking for. Voted as one of the coolest speakeasies in the country, Stache has a bit of an obsession with getting your drink just right. Feel like an aristocrat with one of Stache’s signature cocktails in your hand while you enjoy a burlesque or cabaret show.

Other Fun Things To Do In Fort Lauderdale

Wondering what else to add to your Fort Lauderdale itinerary? Add these other stops and activities to soak up the sights and learn more about Fort Lauderdale’s cultural scene.

Go To The Beach

You can’t visit Fort Lauderdale without enjoying a day at the beach. With 23 miles of beautiful Florida beaches, you’re sure to find more to do than just lounging around on a beach towel. You can take a bike tour of the entire beach, rent out a jet ski, explore the deep blue sea with a snorkel, or enjoy one of the many free events going on at any one time.

Fort Lauderdale Beach is a must-visit for long stretches of powder-white sand, snorkeling, diving, and other fun water activities. But if you’re feeling cheeky, Haulover Beach is one of the many clothing-optional beaches in the area. 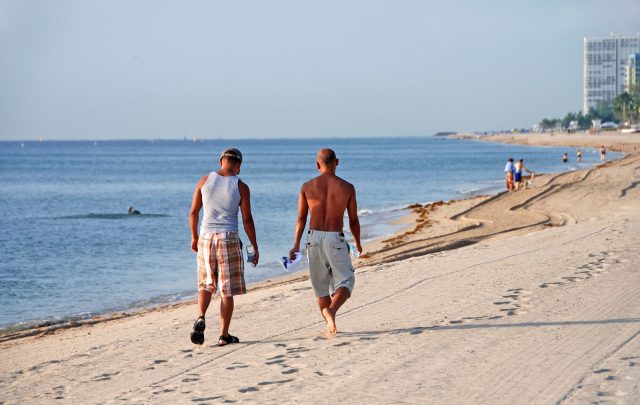 Catch A Show At The Broward Center

201 SW 5th Ave.
Depending on when you visit Fort Lauderdale, you can catch any kind of show at the Broward Center For The Performing Arts. From Broadway musicals to classic operas, to live concerts by the biggest pop stars, you’re sure to find a show you’ll want to watch.

Enrich Yourself At The Fort Lauderdale Museum of Art

1 East Las Olas Blvd.
If you ever get tired of seeing beautiful people in Fort Lauderdale, why not go see some beautiful art? The Fort Lauderdale Museum of Art has the largest collection of post-World War II Northern European expressionist art in the country, as well as many important Native American, African, Pre-Columbian, and South Pacific art.

713A E. Las Olas Blvd.
You can never go wrong with a good old-fashioned shopping day. Las Olas Boulevard is the premier shopping lane of Fort Lauderdale. High-end shops interspersed with gourmet restaurants and chic galleries populate this long stretch of riverside property. Be prepared to pull out that plastic, because you won’t be able to resist taking something home with you. 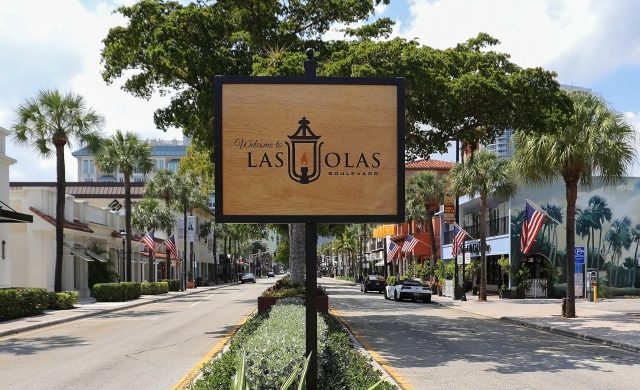 No matter who you are, the Gay Capital of Florida has something to offer you. Whether you want to relax on the beach, party in one of the city’s numerous gay clubs, or immerse yourself in the local gay culture, Fort Lauderdale will entice and excite your senses in a way only the Sunshine State can.