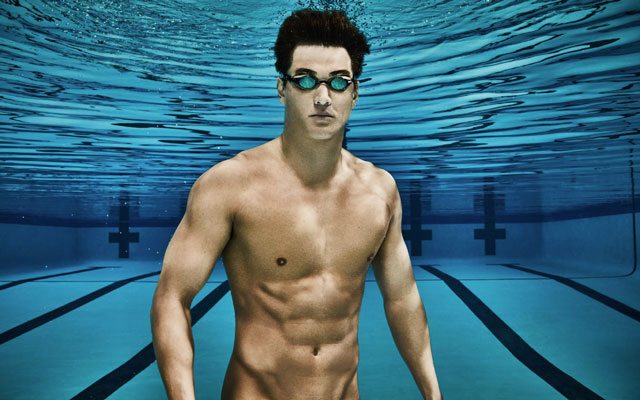 Today, we stumbled across freestyle swimmer Nathan Adrian’s photo spread and his tan lines have us gagging. As a three-time Olympic gold medalist, Adrian’s not shy about showing some skin, so the Body Issue was obviously an easy shoot.

In addition to the photos of his unbelievably taut tush, ESPN sat down with Adrian and learned some interesting facts about his life. Although he’s a major hunk, Adrian revealed, growing up, his acne made him insecure.

“I had acne as a kid. I certainly wasn’t the only one, but it doesn’t make it any easier to be walking around in a Speedo. The acne wasn’t ever bad enough to go on Accutane or anything, but it was certainly bad enough to warrant several trips to the dermatologist. I just kind of dealt with it. It was not something I necessarily tried to hide from; for me, I just had to own it. I was lucky that I got to see my older brother and sister and be like, “Thank God there is light at the end of the tunnel.” Adrian said.

He also talked about his bulging biceps saying, “With my roommate every now and then, I jokingly break out the little tailor measuring tape and I measure my biceps and make it a little competition about who has a bigger bicep, me or him. That’s ultimately a joke. My biceps aren’t helping me move through the water or to drop 0.5 a second in my 100-freestyle. But it’s fun every now and then … for lack of a better term, bro-ing out. This is what you do if you’re a couple of swimmers hanging out. Let’s see, hold on, I actually have the tape here right now: 16.5 inches [laughs].”

Although his arms are impressive, that’s not his favorite body part. Apparently, Adrian’s lats are his pride and joy. He told ESPN, “If I had to answer the question of what I am most proud of, it would have to be my lats. We work on our pullups and lats a lot. Not necessarily the most beautiful muscle in my mind, but to be able to put on 100-plus pounds and be able to do a pullup, when I used to not be able to do more than five pullups at all, that’s progress, that’s something I’m really proud of. I can do a pullup with three 45-pound plates on. So 135 pounds doing a pullup. I can do that probably two or three reps.”

Despite his physique and swimming skills, Adrian exposed an aquatic fear of open water swimming. He said, “Open-water swimming just scares me. Once I put my head in the water, if it’s super murky or whatever and I can’t even see my hand, then I just freak out … it’s not OK. I remember an open-water swim in the Bay where that specific instance happened. I was OK as long as I was 100 to 150 yards from the shore, but the second that that opened up into the channel, I absolutely freaked out and had a ton of anxiety. I just had to lay on my back and put my hands up until a boat picked me up [laughs]. It was my freshman year in college [at California]; the upperclassmen didn’t let me forget it.”

I just get really bad anxiety. I can go bodysurfing and do all that stuff as long as the shore, and the shore break are right there, but the second that I get too far away from shore — and there is a particular tipping point, I don’t know exactly what it is — the anxiety really starts to set in. The “Jaws” theme starts playing in my head …”

You can learn more about Adrian here, and if you’d like to see more photos from his spread, head over to ESPN.