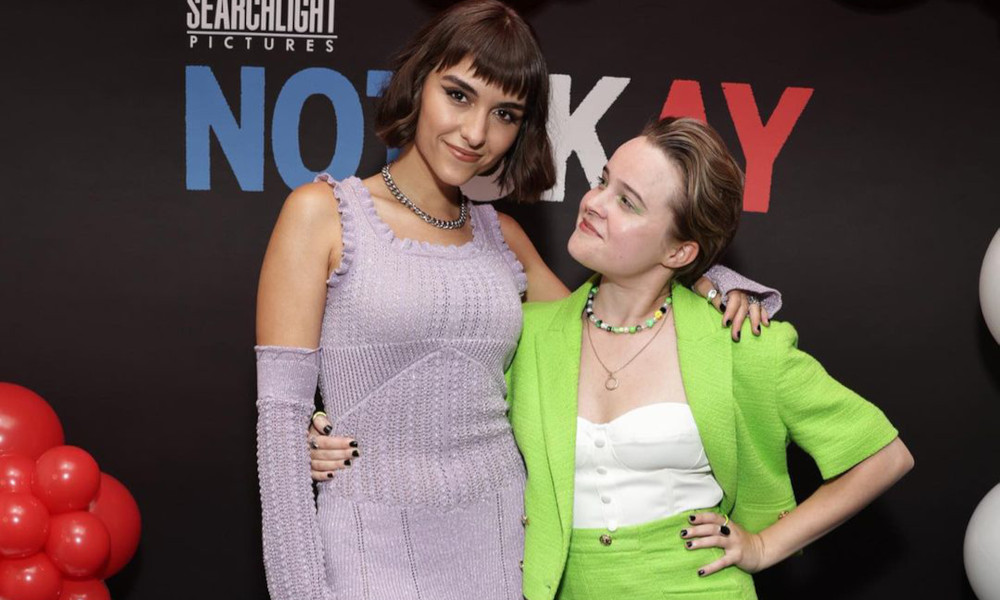 I am not okay. And that’s okay.

At least, that’s what Danni Sanders says in Hulu’s new dark comedy, Not Okay. The unlikable female protagonist is played by Zoey Deutch, who also serves as an executive producer on the project. The film is 27-year-old Quinn Shephard’s second project following her debut movie, Blame, a psychological drama that was released in 2017.

“I wanted to talk about what was going on socially and politically in the world around me and also talk about the internet in a way that felt really personal to me and also to a lot of people my own age,” Shephard told Gayety.

We caught up with the Not Okay director as well as actress and fiancé Nadia Alexander about the meaning behind the satirical comedy, working together on set again, and the mischief they got into behind the scenes.

Why is Danni Sanders Not Okay?

Not Okay follows Danni Sanders, a misguided young woman desperate for friends and fame. When she fakes a trip to Paris to impress a guy (hi, Dylan O’Brien), she finds herself in the spotlight as she always wanted. But when a horrific terrorist attack hits Paris, Danni goes from internet famous to globally hated and canceled.

The tagline for the film is, “This film contains an unlikable female protagonist.” It’s a unique way to introduce the main character and one that didn’t happen without a lot of thought.

“I feel like I haven’t seen enough female-fronted, critical satire. I’ve seen a lot of that genre done with male leads, and I have grown up on those films and loved those films, but it was exciting to get to explore those topics with a woman at the center.”

Not only does the film touch on influencer culture and the effects of social media on generations, it also has strong nods to societal issues like gun violence and the treatment of minority groups.

“I was writing this at a time where I was very aware of what was going on with gun violence in our country, and it’s even more relevant now.”

Shephard continued, “Having a platform as a young, white woman, it is really important to talk about the privilege and microaggressions that many white women perpetuate on the internet. And so Danni felt like a great way to do like, ‘What is the Zillennial Karen?'”

Danni has no friends, no followers, and no promotion at work. So when she’s handed the opportunity to be the center of attention, even if it’s fake, she takes it.

Colin is a blonde Dylan O’Brien with a stacked number of Instagram followers who is always seen with a puff of smoke around his face. He’s a beautiful nightmare.

Shephard met Nadia Alexander on the set of her first film. Now, five years later, the two are newly engaged. Alexander’s character, Harper, is the queer nemesis of Danni, who ultimately sniffs out her lies. Shephard said she wrote the character with her partner in mind. In fact, they worked together to shape Harper’s background.

“Her intelligence and her tenacity but also the fact that she is a moral person at the end of the day is something I was really adamant with Quinn about,” Alexander said.

Alexander proposed to Shephard on the set of Not Okay after the team had wrapped production. She presented her with a beautiful engagement necklace at 1 am, surrounded by their friends and co-workers.

Watch the full interviews where Alexander and Shephard talk about sending thirst traps to Dylan O’Brien and the not-so-happy ending to the film.

“I think that watching this film, you really get a sense of who gets the last word and why that matters,” Alexander concluded.

Not Okay is distributed by Searchlight Pictures and is available to stream now on Hulu.