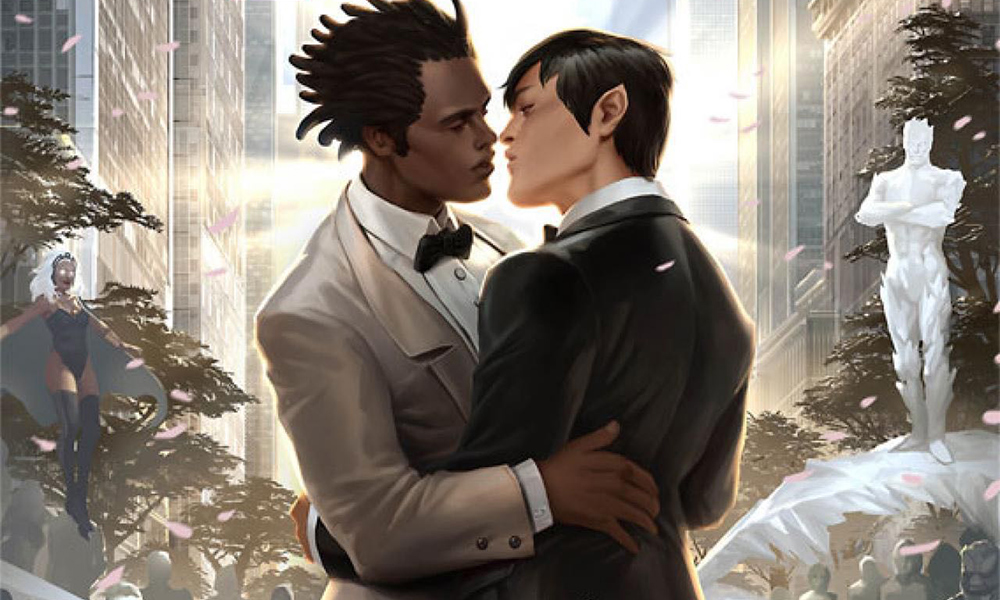 Northstar’s sexuality first surfaces in Alpha Flight #7 (1983) when he meets up with “an old friend” named Raymonde who is strongly hinted to be a former lover. In the story, written by Byrne, Raymonde comments on Northstar’s good looks. He also references the secretive nature of his relationship with Jean-Paul: “Then you have not really told your sister all about me, after all, Jean-Paul? I thought that would have been odd.”

When Raymonde is later murdered, Northstar snaps with blind rage. The narrative caption tells us: “And Raymonde had led him out of that dark fear, into the bright clear light of self-acceptance.”

In 1983, the narrative of a former lover being murdered and thus spurring the superhero to action and emotional eruption was already a comics cliché. But staging that through a same-sex couple establishes a sort of subtextual validation of Northstar’s relationship as something more than the Comics Code Authority “sex perversion” label.

Two years later, in the 1985 limited series X-Men and Alpha Flight, Northstar’s sexuality is once again woven into a key story, this time written by Claremont. After having his consciousness briefly absorbed by the X-Man Rogue, Northstar becomes furious that she now knows his “secrets.”

In a misguided attempt to help Northstar, Rogue then asks him to dance at a very public reception. When Northstar’s own teammates make fun of the incongruity of Northstar dancing at a ball with a woman, Rogue thinks “None of y’all understand him the way ah do.”

In the face of this ridicule, a stoic Jean-Paul takes Rogue up on the dance. She remarks “You don’t have to,” to which he replies, “Yes, Rogue. I do.”

On the literal level, Northstar is being ridiculed for his general disinterest in heterosexual romance. But Claremont is crafting a story of a man who struggles with his closeted sexuality in the face of social pressures.

It’s a sympathetic portrayal of the character that helps to normalize the concept of a gay superhero, even if Marvel couldn’t identify him that way at the time.

Whether through delicate subtext or comics covering wedding events, Northstar holds a uniquely prominent and, at times, poignant position in the history of LGBTQ+ superheroes.

As we come to understand the importance of diverse representation within the superhero genre, this is a character that needs to be known, discussed and hopefully appreciated.

J. Andrew Deman is a Professor for the University of Waterloo.