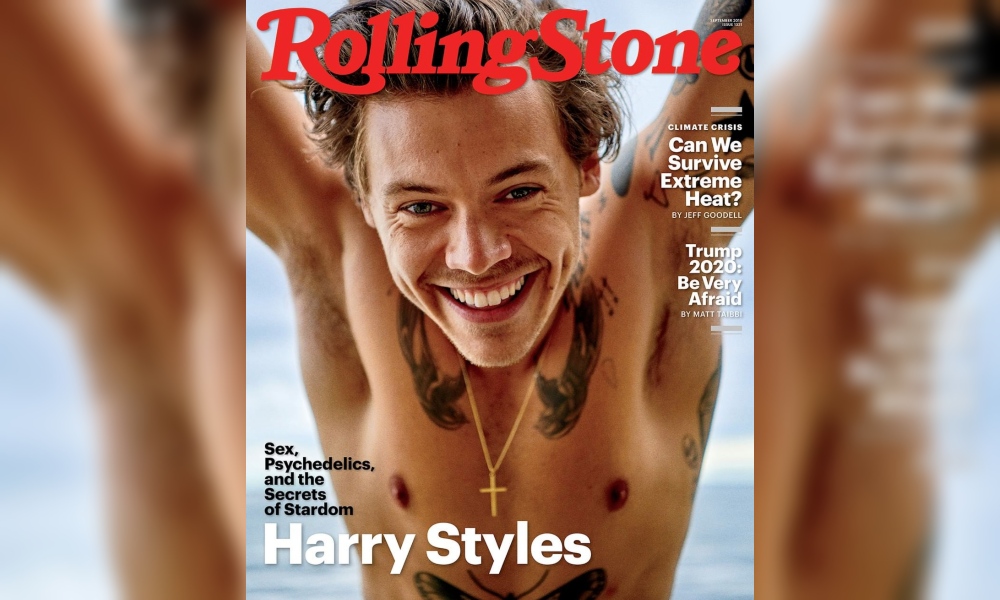 Harry Styles flashed his pits for the cover of Rolling Stone, and his fans are all over him.

On Monday, Rolling Stone released a sneak peek of their September issue which features Harry Styles on the cover. The upcoming issue features the 25-year-old former One Direction singer posing shirtless.

The photograph, captured by Ryan McGinley, was seemingly shot on the beach — the ocean waves in the background. Styles smiles broadly in the image, waving his arms in the air and showing off his tattoos, nips, and pits.

While the story has yet to hit the Internet, Rolling Stone‘s cover line promises Styles will open up about “Sex, Psychedelics and the Secrets of Stardom.”

Here’s a first look at our upcoming cover featuring Harry Styles. You can pick it up on newsstands September 3rd. Photograph by @ryanmcginleystudios

Styles previously graced the cover of Rolling Stone in May 2017, where he talked about his relationship with Taylor Swift and spoke about his then-upcoming solo album. A follow-up record is expected to drop soon.

For obvious reasons, fans were thrilled to see Styles back on Rolling Stone, and this time shirtless.

“I AM NOT BREATHING,” one excited fan wrote on Instagram.

“MY EYES ARE BLESSED,” said another, with a third adding, “goodbye cruel world.”

“One day Harry Styles will stop leaving me speechless. Today is not that day,” said an enthusiastic fan.

One day Harry Styles will stop leaving me speechless. Today is not that day. pic.twitter.com/385QA0rw8u

“can we survive extreme heat?” no, not when it’s harry styles looking like THIS pic.twitter.com/941XV9CnkM

Last week, rumors swirled that Styles has been cast as Prince Eric in the upcoming live-action adaptation of the Disney classic The Little Mermaid. However, a source told PEOPLE that Styles turned down the role; “While he is a fan of the project, he has respectfully declined the offer.”

Style second solo cover for the magazine is set to hit newsstands on Sept. 3.