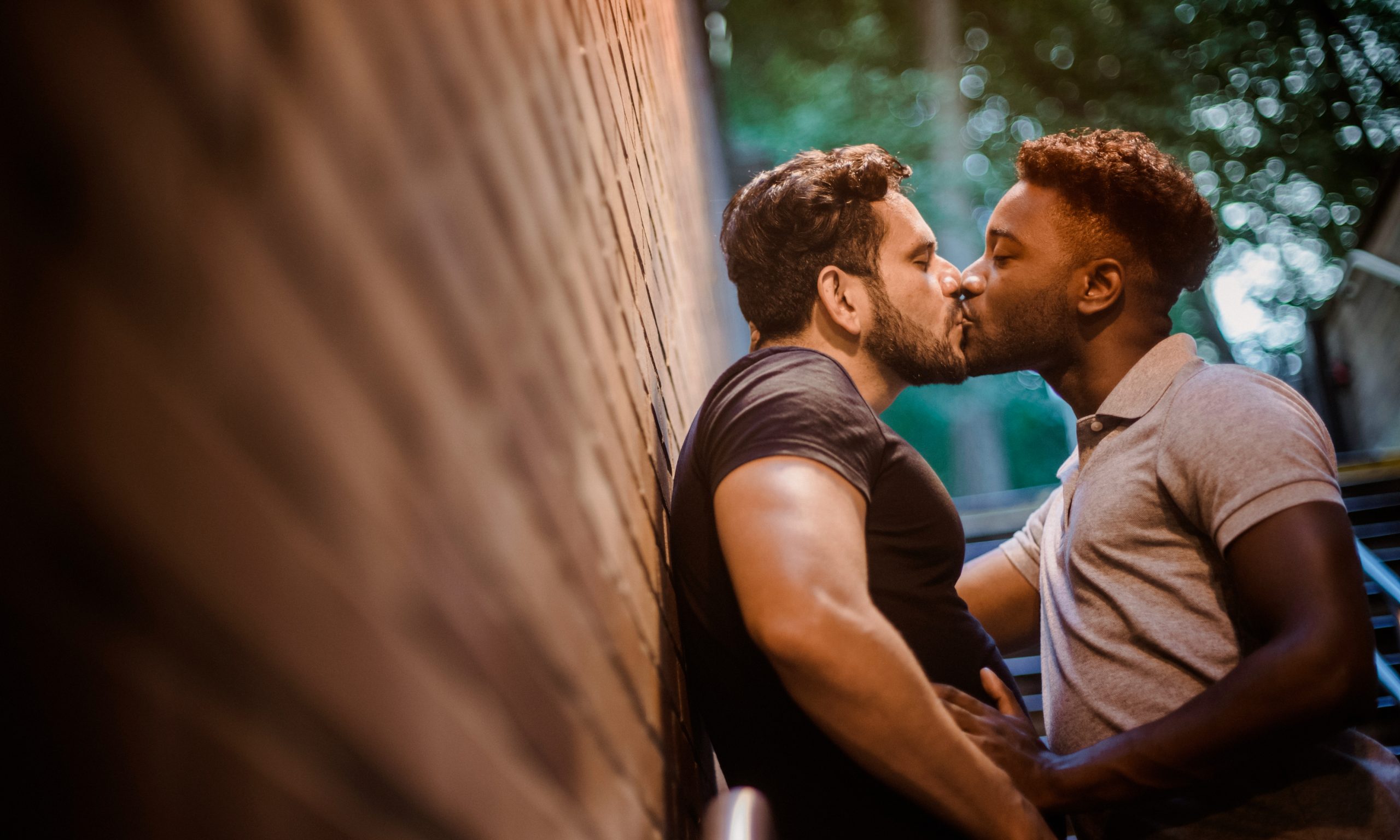 As one of the country’s most historic cities, Philadelphia is full of surprises. The City of Brotherly Love also played a huge role in the early development of gay culture. If you’re looking to plan a super fun gay Philadelphia vacation, look no further. Our guide can help you put together an itinerary of the best restaurants, bars, and nightclubs.

Related | The Ultimate Guide To Gay Travel In Seattle 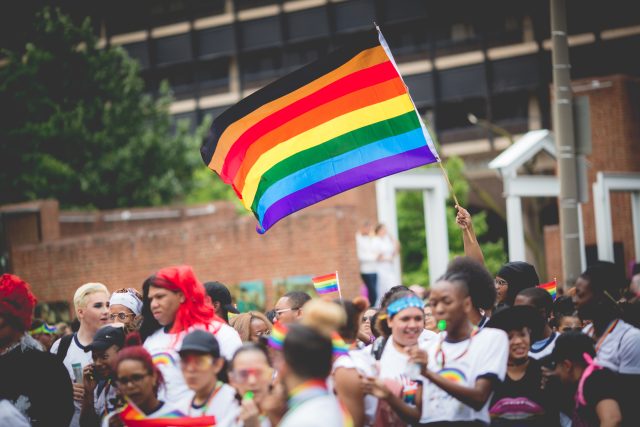 Philadelphia has a strong and storied LGBTQ community, with roots dating back to the 1930s. Some of the earliest gay meetups happened at underground house parties around the city. In those early days, much of the city’s gay and lesbian population lived around Rittenhouse Square. They used Rittenhouse Square Park as a place to meet other members of the community.

The most iconic of the gay neighborhoods Philadelphia has is Washington Square West, locally known as the Gayborhood. In the 1920s, this area was Philadelphia’s haven for high-end entertainment and fashion. It later started to transition to cheap adult entertainment in the 1960s. During the 1970s and 80s, Washington Square West became the home of many gay bathhouses.

The neighborhood was gentrified in the early 2000s which greatly changed this part of the city. In 2007, Philadelphia officially recognized the place of the Gayborhood in the city’s culture. The city mounted 36 rainbow street signs around Washington Square West.

Today, the Gayborhood is dotted with dozens of LGBTQ-owned businesses. They include boutique stores, chic brunch restaurants, tons of gay bars, and attractions like Philadelphia’s Magic Gardens. 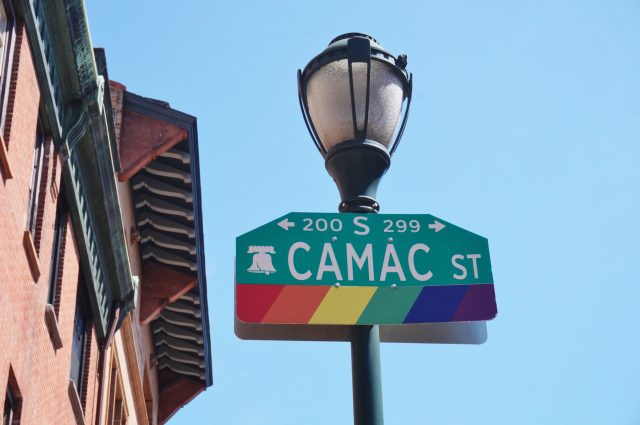 When To Visit Philadelphia

If you’re planning on a fun trip to Philly, your best bet is to visit between March and June. From March to May, you’ll typically enjoy lower room rates and less populated attractions due to the lack of tourists. As you can imagine, June is a special month for gay Philadelphia visitors. The Pride Festival is a huge part of the city’s LGBTQ+ culture.

When Is Gay Pride In Philadelphia?

Following the collapse of the city’s pride parade organizer, a new group was formed, called the PHL Pride Collective. Since 2022, the new collective has been in charge of organizing the PHL Pride Festival and March, with a special focus on uplifting racially diverse trans voices. 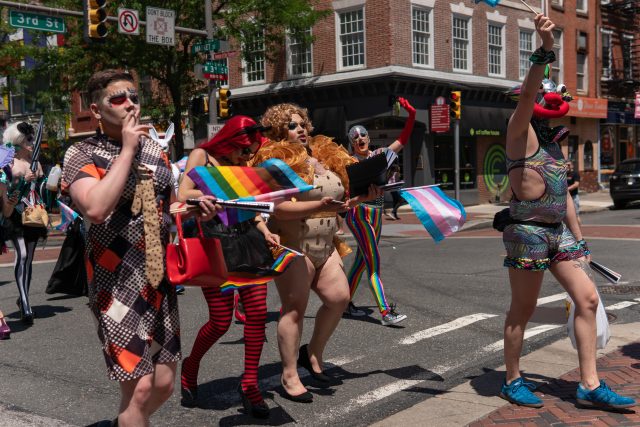 Looking for fun performances and cool festivals to add to your itinerary? No matter what time of the year it is, there are a ton of fun things to do in Philadelphia. Those planning gay Philadelphia vacations should see if these events will be held during their planned trips. Trust us – you don’t want to miss these LGBTQ Philadelphia attractions!

Bears In The Woods

Do you like the feeling of strong, warm, fuzzy arms around you? Check out the Bears In The Woods! This fuzzy fest happens in May at the Woods Campgrounds, a clothing-optional LGBTQ camping resort that spans over 160 acres of private land and is strictly 18+.

Visitors during the bear weekend can expect a fabulous pool party, a wet and wild white party, a kinky or cute parade, and so much more in one of the best gay resorts Philadelphia has to offer.

Every year around October, Philadelphia proudly hosts the largest National Coming Out Day event in the world, OutFest. Unrelated to the Outfest Film Festival in LA, Philly’s OutFest is more of a bumping block party that is centered around being true to yourself.

If you find yourself in Philly on the Sunday before Columbus Day, head over to the Gayborhood in Washington Square West to check out the vibes of OutFest. Nearly 40,000 people come to see OutFest every year, and for good reason. This old-school block party is free to attend, supports gay-owned businesses in the Gayborhood, and shows off the local talent scene. 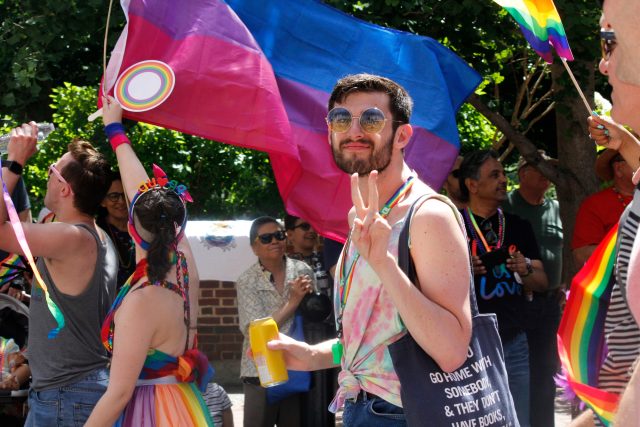 If you’re into art festivals, installations, and performances, visit Philly around September to experience the Philadelphia FringeArts Festival. This month-long festival spans the whole city, celebrating the creativity and innovation present in the city’s artistic community.

During the festival, hundreds of provocative artistic performances line the streets of Philadelphia, giving guests a one-of-a-kind opportunity to interact and be a part of the art landscape. Once you’ve had your fill of the most daring performances to grace the streets of Philly, you can let off steam with the nightly parties held at the FringeArts center.

Where To Stay In Philadelphia

Philadelphia boasts many gay-friendly resorts and hotels, many of which sport antique architecture and a long history of distinguished guests.

One Logan Square
If you want posh accommodations in the heart of Philadelphia, look no further than The Logan Hotel. This gay-friendly hotel brings some of Philadelphia’s best experiences to you. Relax and recharge in the hotel’s spa and heated indoor pool before heading to the on-site steakhouse for dinner or the rooftop cocktail lounge to mingle.

The Logan Hotel has a singular focus on providing guests with a luxurious and comfortable experience, with rooms designed to look clean and cozy. Many rooms come with bathrobes and a hot tub in the bathroom to fit that lush, private feel. 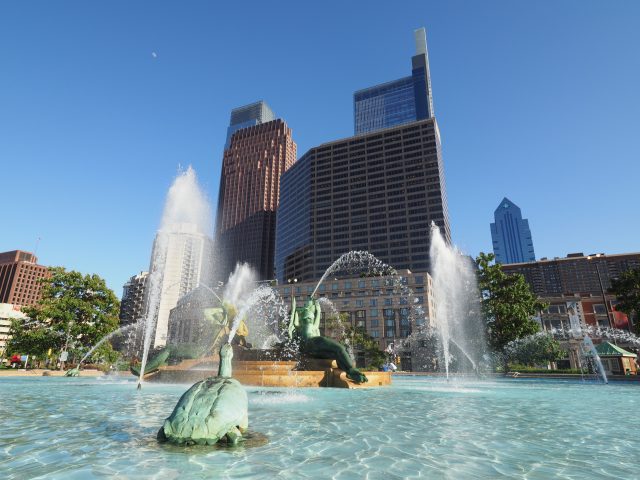 220 South 17th St.
One of the oldest gay-friendly hotels in Philadelphia, the Warwick Hotel on Rittenhouse Square is a bastion of history dressed in an elegant, modern fashion. The 1920s architecture on the outside of the building complements its sleek and contemporary interior design.

An iconic Philadelphia hotel, the Warwick is a great destination for anyone who wants to experience Philly’s history firsthand. This stunning hotel has played host to a long list of politicians, celebrities, sports stars, and other distinguished guests since it started operating in 1928.

Where To Eat, Drink, And Party In Philadelphia

Some of the best food and party places in Pennsylvania make their home in the heart of Philadelphia. Here are a few options you’ll be glad you visited.

219 Chestnut St.
Chef Jose Garces heads the Amada restaurant, Philadelphia’s number-one spot for authentic Spanish tapas. The aesthetic and lighting of the restaurant provide an excellent atmosphere for a romantic night on the town. The menu may be a bit pricey, but the food tastes great and pairs excellently with their cocktail and sangria.

2652 E Somerset St.
If you’re looking for a brunch place with a cozy yet energetic vibe, the Hinge Cafe may be the place to go. Located in the heart of Port Richmond, this lesbian-owned brunch spot also hosts a bakery, art gallery, and live music venue. With its impressive array of breakfast foods, the Hinge Cafe also caters for events and private parties and can double as an events space for a party of up to 32.

243 S. Camac St.
One of Philadelphia’s best piano bars, the Tavern on Camac boasts two floors with two different vibes. On the ground floor is a classy piano bar and lounge that allows patrons to relax and croon along to bluesy tunes from the piano in the corner. The second floor of the Tavern is home to the Ascend nightclub, a gay-friendly club that provides an energetic party space every night of the week.

206 Quince St.
One of the oldest gay bars Philadelphia has to offer, The Bike Stop has been operating as a leather bar since 1982. Enjoy frequent events and promotions at this one-of-a-kind bar, with themed underwear parties happening every month or so. There are four levels of fun at the Bike Stop: the dance floor blazing on the third floor, the relaxed sports bar on the second floor, the chill gay bar on the ground floor, and the kinky leather bar in the basement.

202 S 13th St.
A classic nightclub in gay Philadelphia, Woody’s has been a fixture of the city’s nightlife for over 40 years. This huge nightclub features multiple rooms that can match whatever mood your night takes on. From having a quiet drink in the pub room to chatting over a latte in the coffee bar, to dancing your inhibitions away on the dance floor, Woody’s has an area to match you and your group’s vibe. 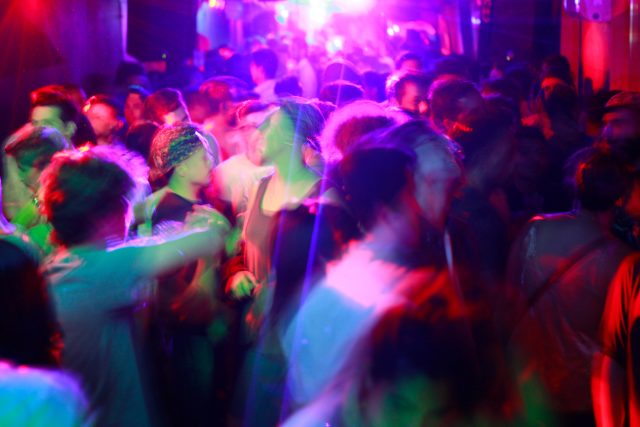 While traveling to another state, it’s generally a good idea to practice smart travel protocols and be polite. Even if you’re traveling to party your heart out, here are a couple of things to keep in mind.

Philadelphia can be very strict when it comes to making sure you don’t imbibe alcoholic drinks in public. Drinking in public, public intoxication, and having open containers of alcohol in public all carry hefty fines and can even land you in jail for a few months. It’s not worth the fine and potential jail time to be drinking in public, so keep the party to places where it’s legal.

Thankfully, Philadelphia gay bars are allowed to keep serving alcohol until 3 AM and usually close down at around 3:30 AM, so you can stay out partying pretty late.

Pennsylvania’s COVID -19 mitigation policies have been essentially lifted for fully vaccinated individuals. You don’t need to quarantine for two weeks when traveling to and from Philly, nor is social distancing mandatory. 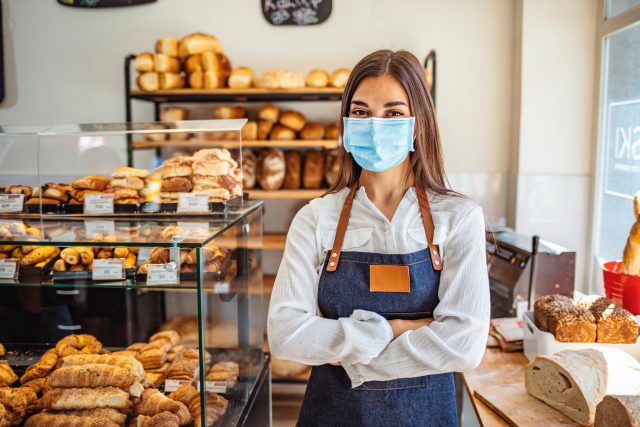 Philadelphia’s LGBTQ community is a prominent part of the city’s tapestry. Whether you want to party heartily or take in some of Philly’s rich history, there are dozens of high-quality establishments and activities for gay tourists.