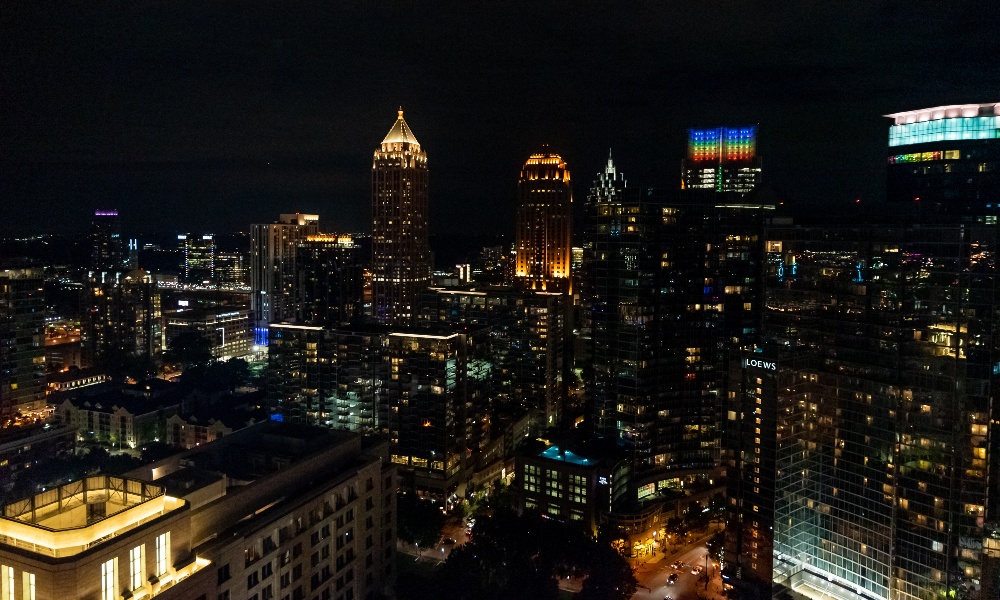 Nicknamed the “Gay Capital of the South,” Atlanta is an LGBTQ traveler’s dream destination. Georgia, after all, is known for being a creativity hub, cultural melting pot, and home to some of the United States’ favorite museums. And thanks to the lasting culture of Southern hospitality, it is one of the most welcoming cities in America.

Here’s your guide to planning the ultimate gay Atlanta vacations! 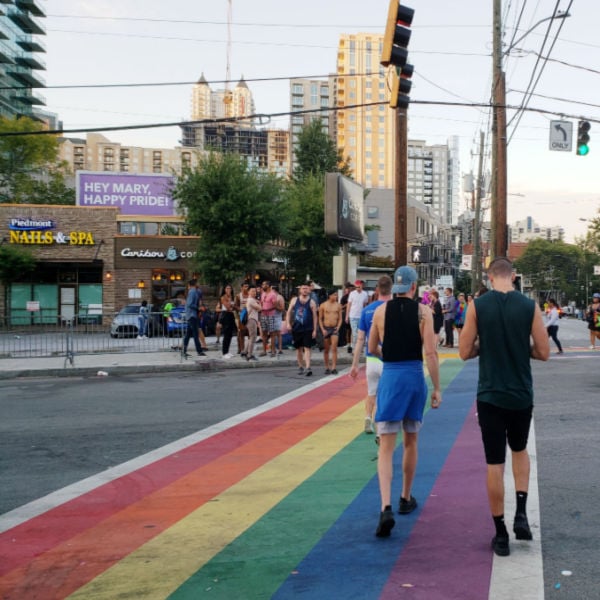 How LGBTQ-Friendly Is Atlanta?

The Atlanta gay scene is thriving and supported, even garnering a perfect score on the Human Rights Campaign Equality Index. 4.6% of its population identifies as LGBTQ, with a loud and proud African-American LGBTQ presence in the community.

The most gay-friendly parts of Georgia include Midtown – the gay neighborhood in Atlanta – as well as Ansley Mall, Little Five Points, Grant Park, Cabbagetown, and the Cheshire Bridge Road.

Where To Stay: Gay Hotels In Atlanta

In Atlanta, virtually every resort is LGBTQ-friendly. Midtown is often considered the biggest “gay area” in Atlanta, so you won’t fall short of options there. Consider staying at one of these hotels on your Gay-lanta excursion.

Once the site of a lesbian tavern and gay western bar, Wylie Hotel has a rich LGBTQ history. It still houses its predecessor, Mrs. P’s Bar and Kitchen, which serves Southern comfort food and international dishes.

Located in the “heart of the arts”, the AC Hotel by Marriott Atlanta Midtown is just a stone’s throw away from the High Museum, Fox Theater, and Atlanta Symphony Orchestra. After a night out and about, grab signature cocktails at the AC Lounge or hit the rooftop bar for stunning panoramic city views.

Situated next to some of the best gay bars in Atlanta, the Loews Atlanta Hotel is a favorite among LGBTQ travelers. It’s walking distance from places like the Fox Theater and Piedmont Park and just two blocks from Marta Station. Loews’ Exhale Spa offers relaxing signature treatments and fitness programs – the perfect activities for a staycation with someone special. 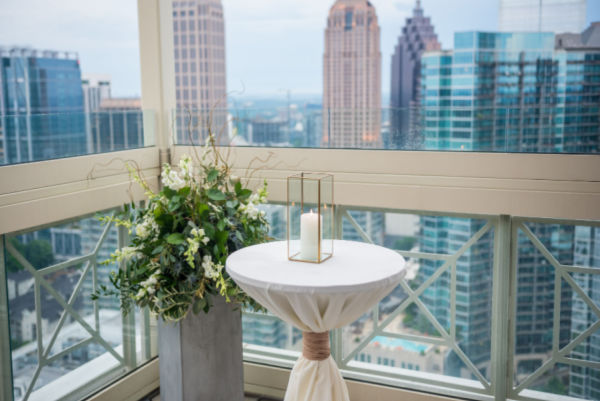 Where To Eat: Gay Restaurants In Atlanta

Atlanta is a popular destination for foodies who love Southern cuisine – it’s often hailed for signature dishes like fried chicken, chili dogs, hash browns, and anything peach-infused! You’ll be spoiled for choice when in Atlanta, but make sure to grab a bite at one of these popular gay-friendly spots:

Baker Dude Bakery Cafe is a black-owned pastry shop and member of the National LGBT Chamber of Commerce (NGLCC). This vibrant cafe is not just LGBTQ-inclusive, but it also caters to foodies with special diets. You can shop vegan, gluten-free, and keto-based sweets!

Plus, its OneLove Cupcake Outreach Program directs proceeds to healthcare professionals from Emory and Children’s Healthcare of Atlanta.

Guac Y Margys is known for its weekly events. Swing by Taco and Tequila Tuesday or attend the guacamole and margarita-making classes!

Events like Wings Wednesday and Burger Thursday bring in tons of LGBTQ sports fans from Atlanta and around the U.S.

Finca to Filter is a queer and female-owned coffee shop known for its drip cold brew and artisanal roasts. We recommend the cheery and chocolatey Familia Boza brew and the tasty fruit-based Something Wild brew. 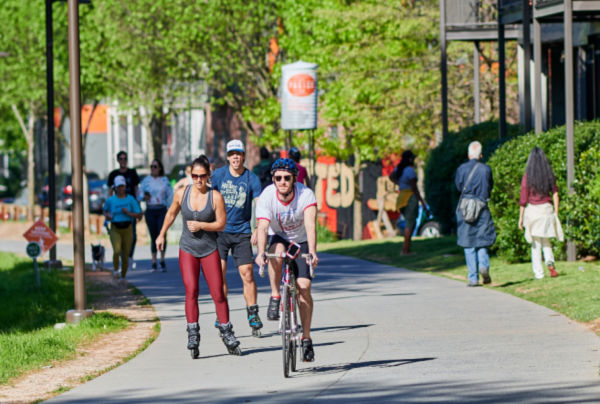 Where To Party: LGBTQ Atlanta Bars And Clubs

Atlanta gay bars have something for everyone, from drag shows to go-go dancers. Plus, dress codes aren’t a thing – most gay clubs in Atlanta encourage guests to go in whatever makes them feel good!

There is nothing you can’t do at The Heretic – you can hit the dance floor, try your hand at some pool, or even speak to a psychic! Attend out-of-this-world events like Wednesday Warpzone, The Heretic’s gay-mer and sci-fi fantasy night. Other event favorites include free country dance lessons and the monthly harness party.

Tripp’s Bar is a small but bustling gay bar that offers refreshing drinks under the warm Atlanta sun. Guests can show off their vocals with some karaoke every Sunday or indulge their competitive side at the weekly Wii Tournament!

Lips accepts reservations for all special occasions, from bachelorette parties to birthday bashes. 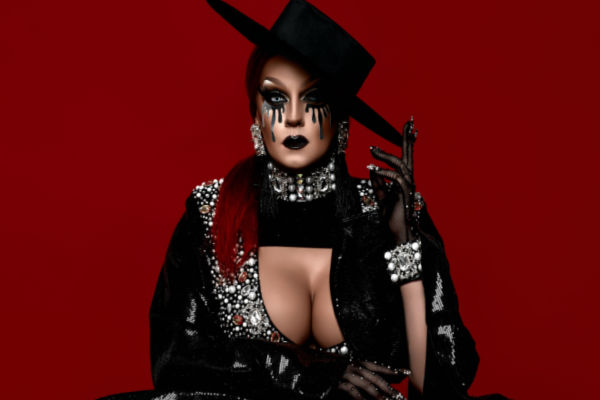 Mary’s is the best gay bar in Atlanta for those with a soft spot for dive bars. Weekly events like the Heatwave Disco, Pop, and Grind and Queer Bait draw in dozens of guests. Karaoke fans will also be pleased to know that Mary’s machine has over 15,000 songs!

At My Sister’s Room, ladies’ night is every night! This lesbian club has welcomed new and loyal patrons through its doors for over 20 years. Its most anticipated event is Sexacola, the largest Girl Fest in the South, every May. At this weekend festival, guests can enjoy live DJs, drag shows, fire routines, and burlesque performances.

Future is home to a 14,000-square-foot dance floor and the best cabaret shows in Atlanta. Sing your heart out with weekly karaoke, hosted by Dynisty St. James, or enjoy Southern Drag shows featuring the Fantasy Girls. Fans of Ru Paul’s Drag Race can attend weekly viewing parties, followed by a night of dancing and cocktails!

Where To Go: LGBTQ Events In Atlanta

Atlanta hosts some of the most exciting and popular LGBTQ events in the United States. Don’t forget to add these annual events to your gay travel Atlanta itinerary! 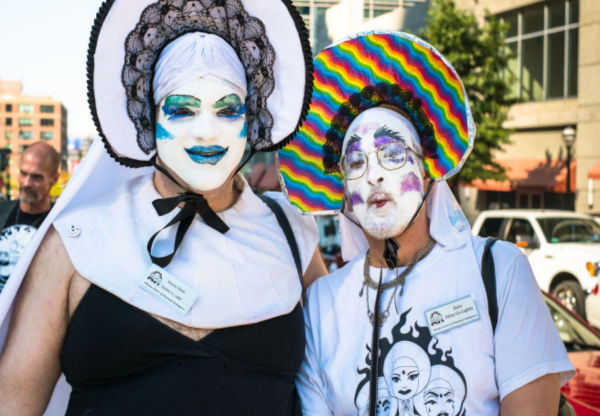 Atlanta Pride is the biggest event in the Atlanta gay scene. It is also the largest Pride event in the South, drawing in over 300,000 attendees. Atlanta Pride happens every October and includes activities like the Trans March and Rally, Atlanta Pride Kick-Off Party, and Annual Dyke March.

The Atlanta AIDS Walk is the biggest LGBTQ community fundraiser in the South, with over 314,000 people having participated in its history. The walk has raised over $42 million for AIDS prevention, testing, and treatment. The event also features a music festival and a 5k run.

What started as a five-day celebration of LGBTQ movies is now an eleven-day event with some of the best LGBTQ storytellers and artists across the country., Atlanta’s Out on Film Festival features films about discrimination, religion, the HIV/AIDS epidemic, marriage equality, and many other relevant topics.

This award-winning festival holds the 2018 Beacon Award for Community Engagement and the Best of Atlanta award from Atlanta Magazine in the Support of LGBTQ Artists category.

The Joining Hearts group has been supporting those impacted by HIV and AIDS since 1987. It hosts several fun events you can attend each year, such as the annual Joining Hearts pool party and Journey of Love, hosted by MCs Liza Rodriguez, Manny Lehman, and Enrico Meloni, which takes place over a weekend in June.

Other Fun Things To Do In Atlanta

Atlanta is undoubtedly one of the most LGBTQ-friendly states in America, but it’s also home to world-class attractions. Here are a few activities you must try: 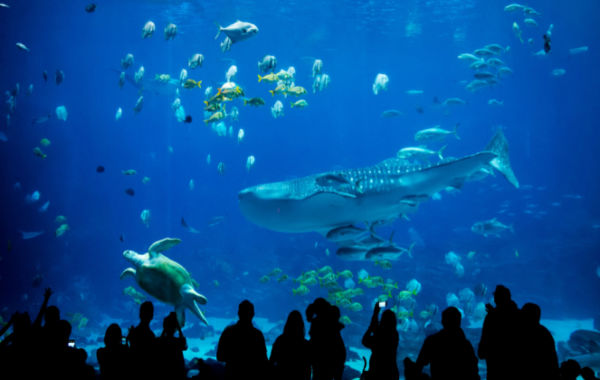 History buffs should visit the Delta Flight Museum, which is 68,000 square feet of aviation history. Feast your eyes on impressive 1940 Douglas DC-3 passenger planes and the Waco 125 biplane, which is the only preserved one of its kind. The flight museum’s most famous attraction is the Boeing 737-200 flight simulator that puts guests in the pilot seat.

Catch A Glimpse Of Aquatic Life At The Georgia Aquarium

The Georgia Aquarium is one of the largest marine attractions in the United States, housing over 100,000 incredible sea creatures. Come face-to-face with species like whale sharks, California sea lions, bottlenose dolphins, electric eels, and thousands more. For those who want to get up close and personal with some of Georgia Aquarium’s friendlier animals, you can book encounters with playful belugas, penguins, and even sharks!

Pop A Soda At The World Of Coca-Cola

Nothing is more refreshing than a sip of Coke on a hot summer day in Atlanta! The good news is that you can easily get your Coke fix at the World of Coca-Cola, which takes you on an entire journey of the beloved drink’s innovative history. Try different Coca-Cola brand beverages, guess the origin of various beverage scents, and enter the Coca-Cola vault to learn about its secret ingredients. 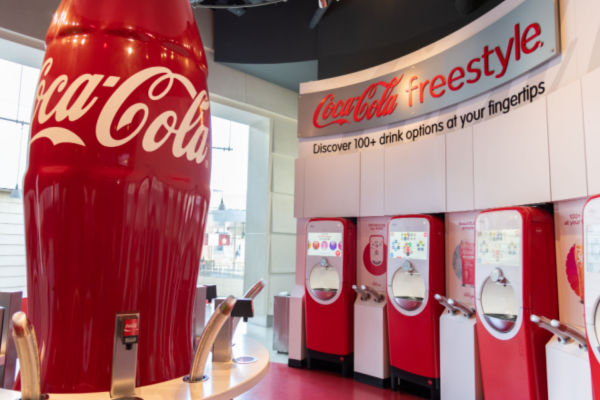 Admire European Paintings At The High Museum Of Art

Once a stately home in the heart of Atlanta, the High Museum of Art houses over 18,000 pieces, including works from the 18th and 19th centuries. It is mainly known for its European art collection, though it has expanded its collection to include prehistoric African art.

The High Museum has many weekly events, including Toddler Tuesdays for children aged 15 months to three years. The High also has occasional Teen Nights, where teenagers can attend workshops, explore galleries, and enjoy live music.

The National Center for Civil and Human Rights is home to some of the most impressive historical exhibits. Here, you’ll discover everything you need to know about the U.S. Civil Rights Movement, the life and impact of Martin Luther King Jr., and the fight for human rights.

Atlanta’s gay scene is thriving and continues to draw in thousands of tourists annually. If a history-rich, food-forward, and fast-paced gay-cation is something that appeals to you, Atlanta should be your next holiday destination.