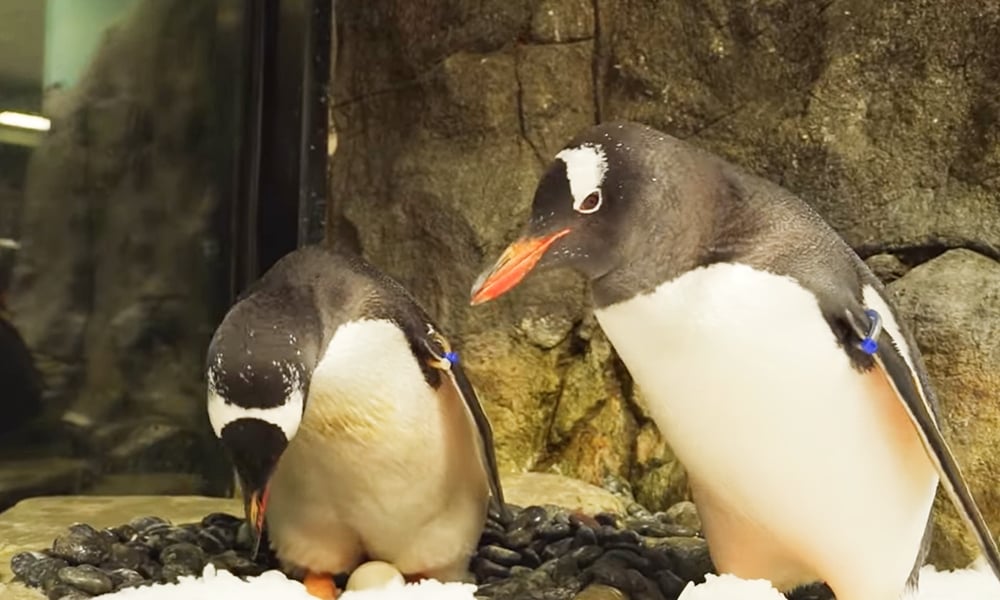 Gay penguins, Sphen and Magic, fell in love in 2018 when Sphen presented Magic with a “special stone,” and the rest is history. According to Pink News, the two were looking to start a family and even attempted to incubate a rock. When keepers at Sea Life Sydney noticed the couple’s behavior, they gave them a real egg to raise that a heterosexual penguin couple struggled to care for. They took turns incubating the egg for 68 days before it finally hatched, welcoming their firstborn, Lara, into the world.

Where Are They Now?

Since then, Lara is all grown up, and the penguin dads welcomed their second baby, a son named Clancy. Keepers say once Lara has a baby of her own, Sphen and Magic will become the first gay penguin grandparents.

Their relationship is strong as they navigate moving house and their third breeding season together.

Strongest Couple On The Ice

In an update by the aquarium, penguin keeper Keira Ponting said, “They are a great example to the rest of the colony. They’re inseparable and proving just how strong penguin bonds can be.”

Ponting said the other penguins in the exhibit look up to the couple and have moved their nests to be closer to Sphen and Magic to “learn from the best.”

Sphen and Magic first gained stardom after featuring on the acclaimed Netflix show “Atypical.” In season three, penguin-lover Sam tells his sister Casey he would be okay with her dating a girl because then “you’d be like Sphen and Magic, the two male gentoo penguins at the Sea Life Sydney Aquarium.”

Sphen and Magic celebrated three years together with a frozen fish cake shared with their neighbors.

Gay Penguin Couples Across the Globe

Sphen and Magic are not the first gay penguin parents found in a zoo. In New Zealand, you’ll find two lesbian penguins named Thelma and Louise. Eduardo and Rio live happily together in San Francisco, and Inca and Rayas are parents at the Faunia Park Zoo in Madrid.