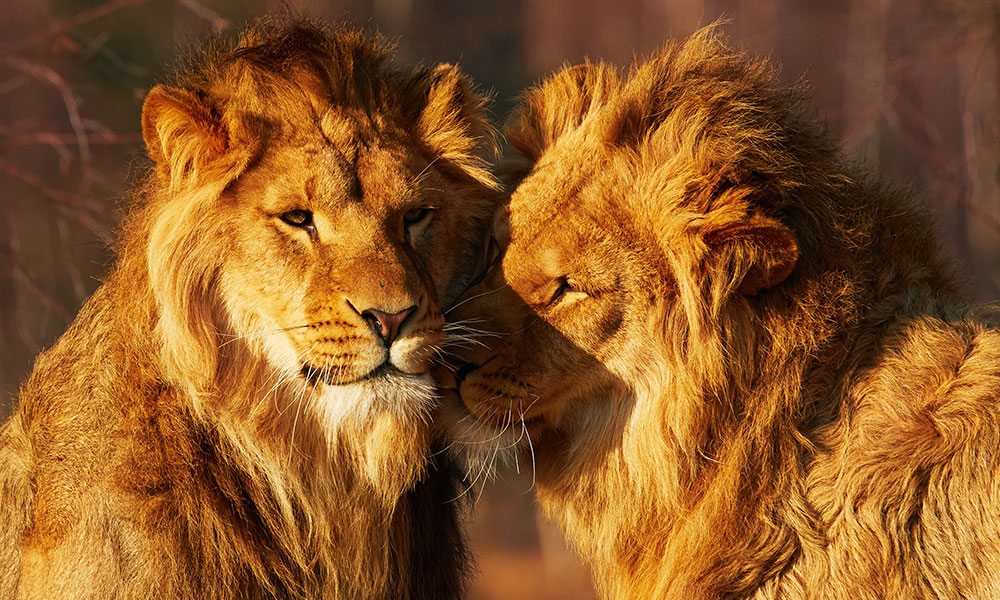 Wildlife photographer Russ Bridges caught two male lions having sex in a wildlife preserve in Yorkshire, England. The adult lions live in a small pride at the Yorkshire Wildlife Park.

“There are two males and a female in that pride,” Bridges said. “One of the lions suddenly got up, walked over and jumped on his friend’s back,” he continued. “In fairness though, every time a male went near [the lioness], she snarled and swiped their faces with her paw.”

“It’s not really unusual for them to act that way sometimes,” Bridges stated. “I don’t know if it’s a dominance thing or something like that — it looks as if they are aggressive, but it’s all play between friends. It’s like he’s showing his pride in what he’s doing.”

“Usually they lay asleep doing nothing when I go to photograph them, but this time they were up and about. My favorite shot is the one where he appears to be sticking his tongue out.”

Bruce Bagemihl, a Canadian biologist, investigated homosexuality among lions in his book Biological Exuberance: Animal Homosexuality and Natural Diversity. He reports that among lions “the bond between male companions is closer and longer-lasting than any heterosexual bonds.”

And so we are all connected in the great #CircleOfLife. ? pic.twitter.com/kjH2BudSAo

He went on to explain the behavior of male lions before they engage in same-sex sex. “The two animals may be visibly sexually aroused, the behavior may directly precede or follow homosexual copulation or courtship, or the affectionate activity may occur in a same-sex pair-bond.”

“Among male pride-mates, homosexual activity often begins with a great deal of affectionate activity (which is also a component of ‘greetings’ interactions between males). This includes mutual head-rubbing (often accompanied by low moaning or [a] humming noise), presentation of the hindquarters to the other male, sliding and rubbing each other, circling one another and rolling onto their backs with an erect penis,” Bagemihl reports. “This may lead to intense caressing and eventually the mounting of one male by the other, including pelvic thrusting.”

According to Bagemihl research, there have been accounts of many male lions engaging in sexual activity at concurrently. “Sometimes three males rub and roll together, mounting each other in turn.”

One thing is certain; the lion definitely isn’t sleeping tonight.