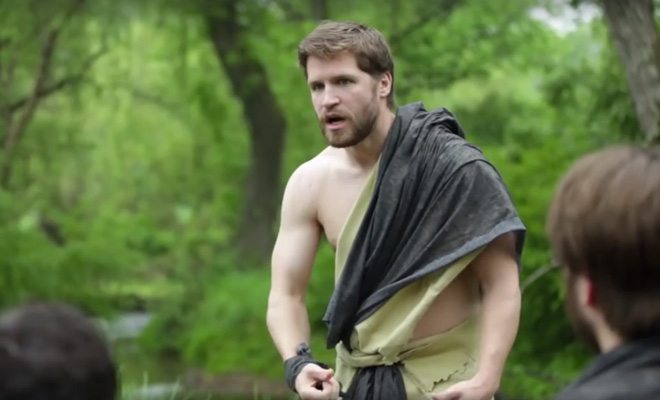 According to archaeologists, humans who lived during the Stone Age presumably enjoyed same-sex sex. The Kangjiashimenji Petroglyphs, a series of rock carvings found in northeast China, clearly depict bisexuality in more than 100 figures. The drawings clearly show ithyphallic (an archaeological term for “erect penis”) males engaging men and women in sexual acts.

In a hysterical sketch written and directed by John McKeever, we’re transported to the not-no-distant past in the middle of a heated debate. In the video, the male members of a caveperson community discuss their dwindling population.

The apparent alpha male frustrates the entire group when he suggests a hypothesis to the cause of their dilemma. “When men are with men, and women are with women — basically when we do samesies — no people come out. So we can’t do samesies for awhile,” he says.

The theory infuriates the cavemen, and they quickly attempt to come up with alternative solutions. One young caveman suggests they, “still do samesies, but we take the people juice, and we throw it on the opposite.”

Nonetheless, the alpha male asserts his dominance saying, “You waste the people juice when you do it samesies.” Clearly, man love was a big deal in caveman communities. Watch the funny video below!