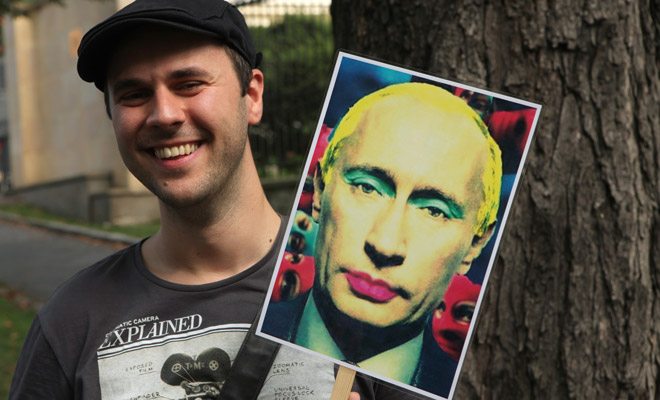 Jim Mulcahy is an openly gay American priest who is causing a media frenzy in Russia after being arrested and kicked out of the country for violating the terms of his tourist visa, which now allegedly involves preaching and visiting LGBT people.

Mulcahy told The Daily Beast that camera crews busted into a tea party he was having with an LGBT group in the Russian city of Samara. The camera crew also came with Russian police, who continuously asked him via a translator, “What’s the purpose of your being here right now?”

Apparently, the police received a tip that Mulcahy was going to perform a same-sex wedding ceremony (he wasn’t). The men who made this up were happy to tell the media crew as well. News reports about Mulcahy’s arrest included gross comments about him being American, an openly gay man and a resident of Ukraine.

Mulcahy has been going to Russia at least once a year since 2012 to visit with Christian and non-Christian groups. This particular group happened to be a local LGBT group called Avers. Because Russia’s new anty-terrorism law makes it hard for visiting religious officials, people like Mulcahy are more visible on the radar.

After taking him into custody, authorities grilled the pastor for four hours, using only a translator provided my police. His lawyer wasn’t allowed to call him, and he could hardly understand what they were saying.

After appearing in court, a judge denied his motions to wait until his lawyer could represent him and get some witnesses, and to delay the trial based on his age and health, reports The Daily Beast. Russian TV later said that evening Mulcahy would be fined and thrown out of the country.

“Basically, I had a trial where I didn’t understand what was going on,” he said. “Russia is the second country I’ve been kicked out of.”

Mulcahy was also kicked out of Iraq and moved to Egypt as a younger man. He eventually became a hospital chaplain, but after being diagnosed with cancer in 2000, decided to find religion again, which led him to perform missions around the world.

After the situation, a friend booked him a flight to Helsinki so he could bypass the media frenzy at Moscow airport, The Daily Beast reports. But the police were waiting for him at the Samara base.

“They tried to do an interrogation,” Mulcahy said. “They took away my court papers and didn’t return them. They kept asking for names of people in Samara and phone numbers, but I refused to give them.”

As for the nameless others at the tea party: it’s all in a day for an LGBT person in Russia. Two young Russians wearing priest collars were caught on tape, which is why Mulcahy’s lawyer filed an appeal there’s no chance of winning.

But, Mulcahy says, we must make these appeals to show that the courts are not following the constitution. It’s like water dripping on a stone; eventually, it wears away.

Read the story at The Daily Beast.