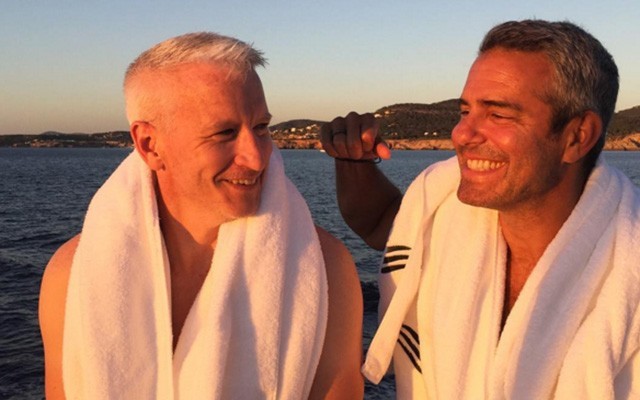 Well now that the cat’s out of the bag…

Andy and Anderson are brothers from another mother, and who doesn’t love a bit of sibling rivalry? Especially if that particular rivalry leads to shirtless pictures, but we’re getting ahead of ourselves.

Andy Cohen is bored. Earlier this week everyone’s favorite gay talkshow host was knee-deep in socially distanced ennui when he decided to practice a little mischief. While his young son Benjamin was taking a nap, Andy was looking for trouble.

“If it were a normal year, I’d be on vacation with my pal…threatening to post shirtless pics of him,” said Andy in an Instagram post. “Well, it’s 2020 and I’m sitting on my deck so I figured I’d just post without asking and piss him off! #SilverFox.”

The post in question was a tasteful shot of the CNN news broadcaster shirtless in a garden with a delicate yellow flower tucked behind his ear. The next image was another shot of Cooper’s decidedly untanned torso, this time on a fancy boat!

The comments are truly something. Comedian and podcaster Hannah Berner went all-in with “I’m wapping.” Even Ryan O’Connell from Netflix’s ‘Special’ joined in, saying “Thank u for your service.” One user even went so far as to say, “You know he has the pinkest flower in his garden.”

Later, Andy took to his story with an update. “Anderson is so pissed at me you guys,” said Andy. “What else am I supposed to do?” he continued. “Maybe I’ll do an Instagram live later, I dunno. I got Ben and Housewives cuts to watch. Maybe I’ll post more shirtless pictures of Anderson.” Now that sounds like a plan.

Maybe we need a cold shower.