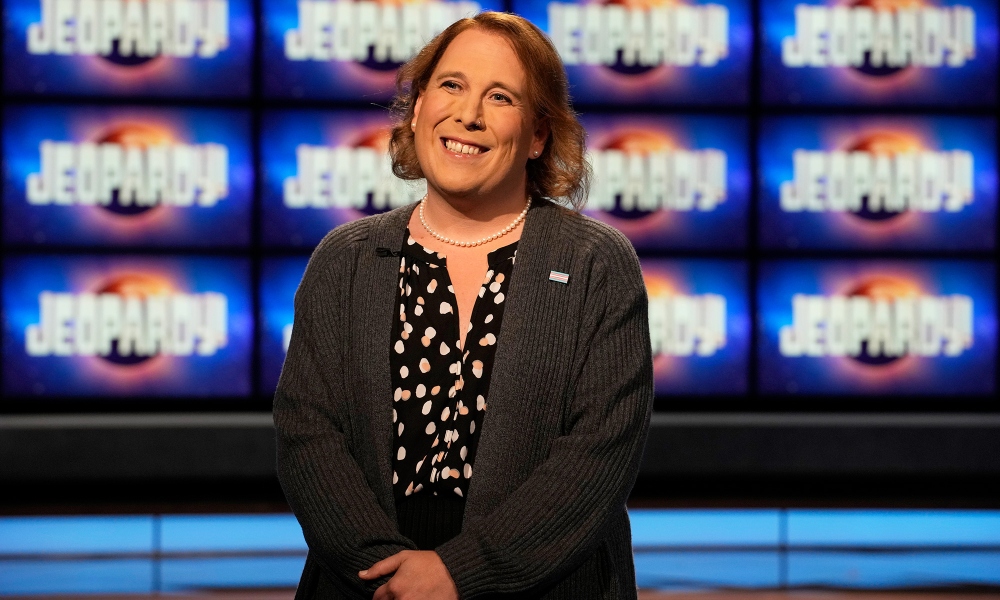 Amy Schneider is Jeopardy’s Winningest Woman, so Who’s Mad About It?

Possibly a win away from a million dollars and the record books, Amy Schneider is a few games away from cementing her legacy among Jeopardy greats. While her run has not come without controversy, it isn’t truly due to Ms. Schneider herself, but rather the public’s reaction to her as Jeopardy’s most successful transgender contestant.

The Board Is Yours

Amy Schneider was born in Ohio, and in the eighth-grade was voted “Most likely to appear on Jeopardy!” by her classmates. She moved to Oakland in 2009 to help with her ex-wife’s career, and in 2016 she started to transition to living as a woman. “When I say I realized I was trans in 2016, I’m simplifying a process that in some ways had been going on my whole life,” she says, clarifying in a tweet, “but 2016 was when I finally realized I was living a lie, and began to let my true self show.”

In November, she beat five-time champion Andrew He to become Jeopardy champion, and is currently on a 26-game winning streak, garnering the fourth-highest in winnings and holding the fourth-most consecutive games of any Jeopardy contestant. All-time, she is the most successful woman and openly transgender contestant to ever appear on the show. 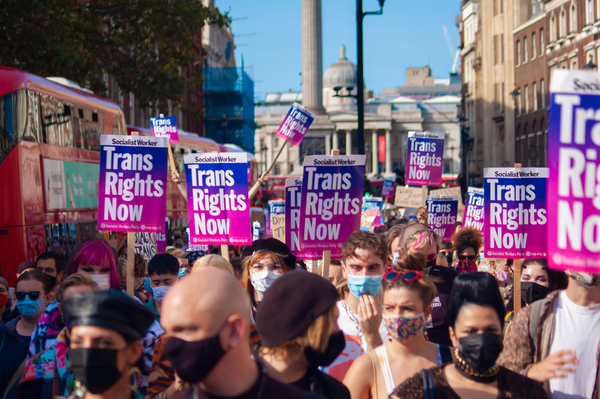 This is the sticking point for many of her detractors. Most of them can’t accept that Jeopardy’s most successful female competitor is transgender. For Amy Schneider, harassment is a daily experience on Twitter, where droves go on a campaign of transmisogyny and misgendering that one can only describe as fanatical. Plenty of commenters take time out of their day to insist “it’s a man” or “she’s taking away records meant for women”.

Funnily enough, arguments that Ms. Schneider’s successes come from her “biological gender” reveal a deeply misogynist belief held by transphobes: that women are inferior to men. I mean think about it, what difference should it make that she’s a man or a woman in a trivia show? Seriously believing that she has an unfair advantage means that there’s a sincere belief that a woman could not compete on the same level as a man, even on an intellectual level.

What do these people really want? If it wasn’t already obvious, what they’re advocating for is the blocking of transgender people from ANY kind of competition, physical or mental. Even when sporting bodies have already set rules and regulations for trans athlete’s hormone levels (a whole other bag of worms in its own right), cries of “unfairness” abound.

When trans men compete, they’re dismissed as being too “uncompetitive” in their fields. At the same time, they actively ignore the fact that trans women have not gained any kind of dominance in womens’ sport. Transphobes’ real aim is not advancing womens’ rights or seeking fairness in competition, but the erasure of trans people from public view.

Amy Schneider Is A Champion In Many Ways

Amy Schneider has been an amazing role model for women and trans people as she continues her historic run on Jeopardy. “The fact is, I don’t actually think about being trans all that often, and so when appearing on national television, I wanted to represent that part of my identity accurately: as important, but also relatively minor,” she said.

“But I also didn’t want it to seem as if it was some kind of shameful secret. While it’s gratifying to know that people didn’t necessarily know I was trans until they read about it, I do want people to know that aspect of me. I think being trans is really cool!”

On the first weekend of January, Amy Schneider was robbed in Oakland. Her cellphone and wallet among the items stolen. While she apologized for having to fall behind on post-game recaps, it was an opportunity to show that despite the hate hurled her way, many more people were there to offer love and support.

“Take it a step at a time… you’ll get it done… though it is a real pain. Stay the course! You’re such an awesome lady!” someone wrote. “Peaceful vibes, love, and hugs your way, my dear. Keep your chin up. You’re an inspiration to us all!” said another fan. Jeopardy fans everywhere are standing against the harassment, proving that there are plenty more people ready to give love in the world than hate.

Holding herself up with poise and good humor, it doesn’t seem like there’s anything getting in the way of her historic run except for whatever answers Jeopardy will throw at her. For Amy Schneider, Jeopardy history is only days away, and we’re all waiting with bated breath to see it.

RELATED | A Brief But Thorough History of the Word ‘Transgender’