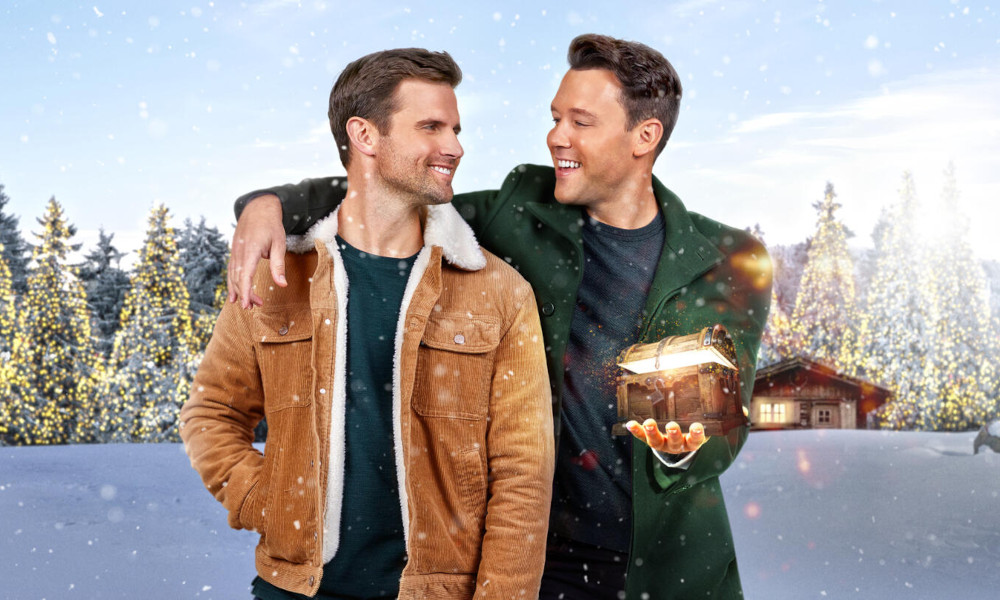 A Christmas to Treasure is the perfect film to get you in the holiday spirit – and it has a leading queer storyline!

The networks and streaming platforms are rolling out their Christmas movie lineups and though the LGBTQ+ representation is not where we hoped it would be in 2022, there are still a few films to look forward to.

Jake Helgren’s A Christmas to Treasure will tell the heartwarming story of two old friends who reunite in their hometown for the holidays. But no homecoming is complete without a good ol’ treasure hunt!

“The passing of beloved Ms. Marley reunites six estranged friends for one final hometown holiday treasure hunt. As the search unfolds and fond childhood memories are relived, sparks fly between Austin Craig (Taylor Frey) and his former best friend, Everett Matthews (Kyle Dean Massey). The gang finds the hidden treasure before the city can turn the Marley house into a holiday resort, but the blossoming holiday romance between Austin and Everett may turn out to be the greatest Christmastime treasure of all.”

It sounds like the friends-to-lovers story of our dreams! Helgren wrote and directed the film and told Gayety he loved bringing a traditional holiday story to life with two men playing the lead. “Not only that, but an extension in that all the loving people surrounding them in the movie don’t ever seem to notice or make a big deal out of either of our two leads being queer.

“It just so happens to be a simple queer storyline set against a traditional “heteronormative” holiday film backdrop, which I think is a really fun theme we have finally started being able to explore as queer filmmakers in the storytelling space — in that a lighthearted love story between two people of the same sex can be just as marketable and worthy of telling as any other we watch on the big screen.”

Fun Fact About A Christmas to Treasure

The two leads, Frey and Massey, are a real couple! The Broadway stars tied the knot in 2016 and recently welcomed a baby girl via surrogate. They have also worked with Helgren before, so choosing them as the leads for an LGBTQ+ holiday film was easy.

“They both played heterosexual leading men in prior holiday romances of mine, so needless to say they were thrilled when I approached them to play the roles,” he said. “Funny enough, I texted them the idea and they signed on before I even wrote the script! They are such easygoing and genuine folk, and I always have a blast with them on and offset.”

Frey shared the news about the upcoming film and said, “Playing opposite my husband was both hilarious and incredibly fun. We also lucked out with a truly great cast and of course, the best director and producing team a guy can ask for.”

The last two years brought in a slew of LGBTQ+ holiday films.  In 2020, Lifetime delivered their first queer holiday film, The Christmas Setup, and other platforms gifted us The Christmas House and Single All the Way, to name a few. But this year, the networks failed to bring the same commitment to inclusive storytelling. We’re hoping there’s more to come for 2022.

A Christmas to Treasure will premiere Friday, December 16 at 8/7c on Lifetime and is available to stream the next day.