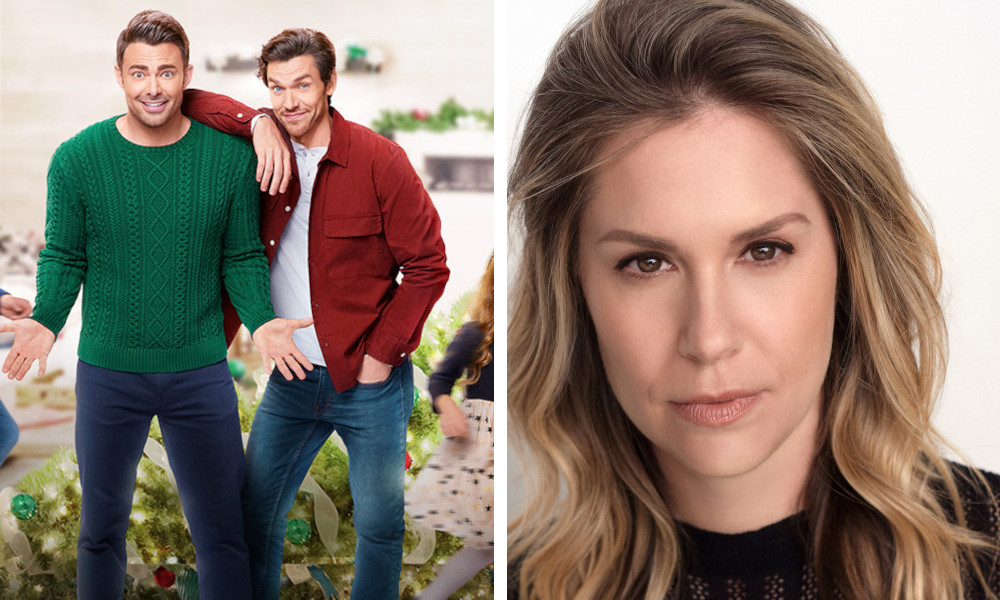 Actress and comedian Amy Goodmurphy has a lot to celebrate with her new film, The Holiday Sitter, and so do we!

The new Hallmark holiday film stars Jonathan Bennett, an actor Goodmurphy has looked up to for years. But she didn’t know The Christmas House star was attached to the project until she had already said yes. “And then when I got it, I was told, ‘Oh yeah, by the way, Jonathan Bennett’s starring in it and you’re his best friend.’ I was like, ‘Yeah, cool. That’s totally normal and Mean Girls isn’t one of my top three most favorite movies of all time.'” It was a dream come true.

However, Goodmurphy was hesitant to even audition for the role of Ellie at first. “I was never personally overly attracted to Hallmark movies as a queer person. I knew that there wasn’t that representation there, and so it wasn’t something that I was overly interested in auditioning for.”

“I was in New York and my agent called me and said, ‘I’ve got this one, it’s Hallmark, but wait, wait, wait, don’t hang up. It’s the very first queer-led Hallmark Christmas movie, and the character they want you to audition for is also gay.’ And I was like, ‘Okay, I’ll have a read. Let me look at it.'”

When Goodmurphy noticed the director was also a queer woman, Ali Liebert, she knew she wanted to read for the role. In fact, the cast is packed with LGBTQIA+ representation, thanks in part to Bennett.

“Jonathan Bennett has been a huge champion within the Hallmark community in the sense of making sure that queer stories are coming through their production team. And with this particular one, he was telling me that Hallmark, as soon as they had the meeting with him, they were on board, they wanted to make this, they realized how important it was.”

Unfortunately, where there is progress, there is pushback. Recently, Candace Cameron Bure has been making headlines since her move from the Hallmark Channel to Great American Family (founded by former Hallmark CEO Bill Abbott). Bure later said that GAF aligned with her beliefs and would maintain “traditional marriages” in their movies.

“I think that I would be lying if I didn’t say that what was allegedly said wasn’t hurtful,” Goodmurphy said in response. “I mean, there’s lots of words I could use to describe it. Ridiculous. Sad. Funny. Really just too bad. I like to use the phrase poor lil’ thing. She just reminded me of a poor lil’ thing saying something like that. But what I can tell you is that I am really proud and happy to be on the other side, with a network that wants to make change and is now championing the queer community. So yeah, I think I’ll just say that I’m really proud to be on that side of things.”

Why You Need to Watch The Holiday Sitter

The Holiday Sitter follows a man named Sam (Bennett). He’s a workaholic who finds himself babysitting his niece and nephew while their parents are away. Of course, no story is complete without a cute love interest. Enter Jason (George Krissa), his neighbor who volunteers to help Sam watch the kids. Goodmurphy plays Sam’s best friend, Ellie.

Even though starring beside Bennett would have a young Amy freaking out, seeing a film like The Holiday Sitter would have meant even more. 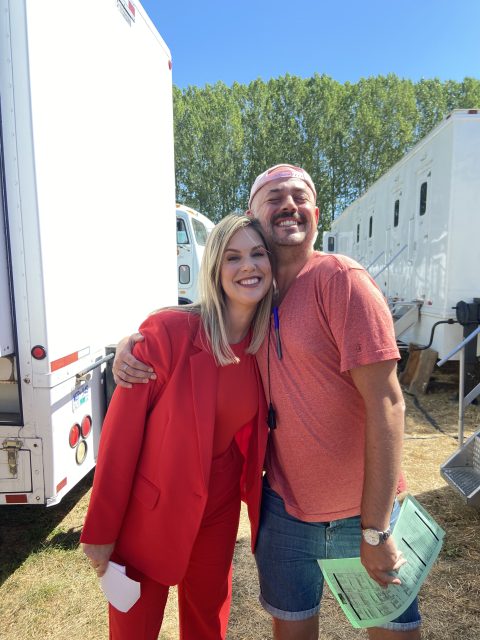 “I honestly think that this could have changed a lot of my journey to being a queer person and that maybe I could have come out or understood myself a lot better had I seen myself represented in what I was battling with at the time.” Goodmurphy went to a Catholic private school and was in the closet until she was 19. So seeing a happy Christmas movie with a gay couple at the forefront would have been groundbreaking. “And I truly think it’s going to mean a great deal to a lot of young queer people and their families, especially at Christmas time.”

In addition to acting, Goodmurphy also works in the comedy field. Her podcast “Poor Little Thing” with Ryan Steele focuses on laughing and being able to make fun of yourself.

“It’s about accepting the inner poor lil’ thing that’s truly in all of us.”

The Holiday Sitter premiered on Hallmark and is available to stream on Peacock.