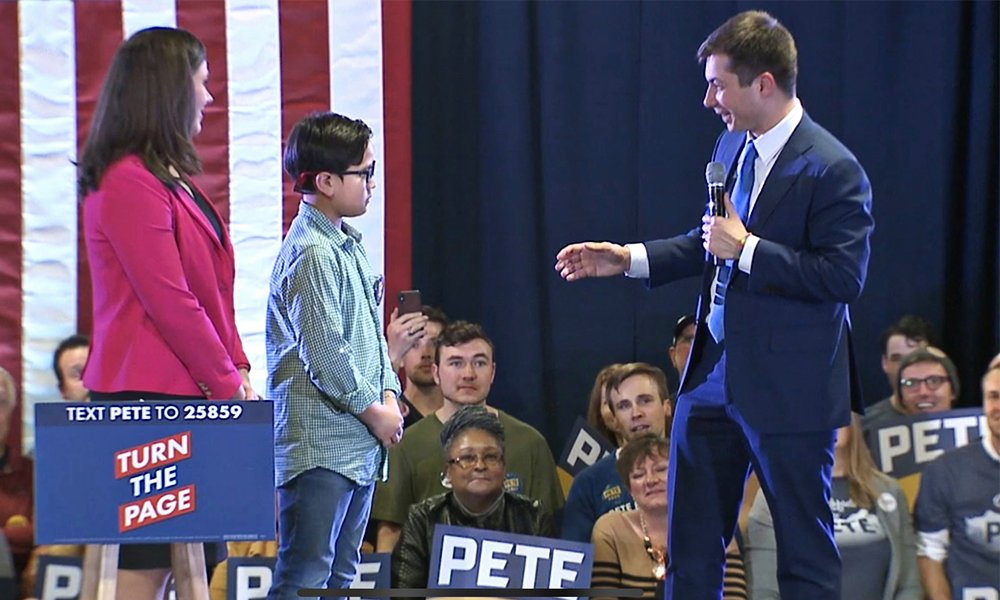 Bravery is a filter through which all LGBTQ+ people must pass. Whether you are out of the closet or not, facing every day with the knowledge that you don’t quite fit into the traditional fabric of society can be overwhelming. It takes a special kind of bravery to stand in front of a room full of strangers to speak your truth.

That is what one 9-year-old boy did in Denver on Saturday night. Zachary Ro submitted a question during presidential candidate Pete Buttigieg’s Saturday night rally, and it led to an emotional moment. “Thank you for being so brave,” wrote the young supporter. “Would you help me tell the world I’m gay, too? I want to be brave like you.”

Zachary and his parents joined the former South Bend mayor on stage where he presented Buttigieg with a bracelet, which the candidate gladly donned. “I don’t think you need a lot of advice for me on bravery. You seem pretty strong to me,” said Buttigieg. He went on to offer Zachary some words or advice, “that might be useful.”

The second piece of advice the former mayor offered Zachary was to be mindful of “who’s taking their lead from you.” He added that “You’ll never know whose life you might be affecting right now, just by standing here. There’s a lot of power in that.”

Most LGBTQ+ people, at some point, find themselves offering advice to someone navigating their own sexuality. To his credit, Buttigieg has hit on some of the most important pieces of advice you can offer to those just coming out. It is a powerful thing when you realize that simply knowing who you are, and being true to that person can have a powerful impact on those around you.

Buttigieg also hit upon another hard truth. “To see you willing to come to terms with who you are in a room full of 1,000 people, thousands of people you’ve never met that’s, that’s really something.” It is something. Trying to imagine this moment occurring exactly like this, at any other time in history is impossible. The fact that a 9-year-old can feel empowered enough to speak freely like this is truly stunning and serves as an indicator of how far we’ve come.

There is a lot to be fearful of and saddened by in the world. That will always be true, but true power comes from moments of hope, just like this. These are the moments that push us to keep going. They empower us to be brave. They inspire us to keep dreaming.

Powerful moment (better audio): 9 year old Zachary Ro of Lone Tree asks @PeteButtigieg how he can be brave and tell people he is gay too pic.twitter.com/1aUbYM8cDM