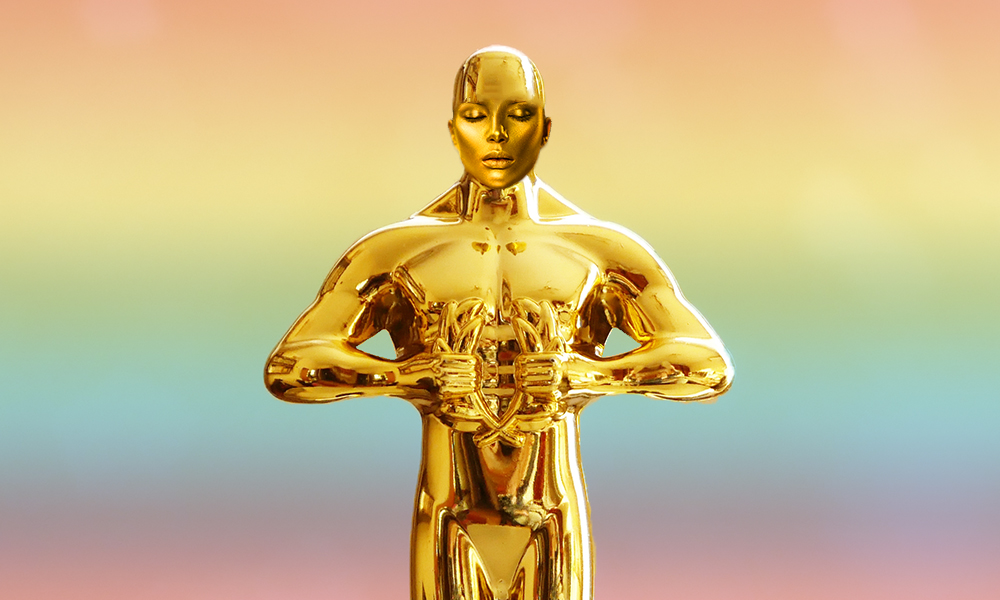 8 Gayest Moments at the 2022 Academy Awards

Let the yassification of the Oscars continue!

The gavel of national politics has been consistently looming over queer people in the United States. This is especially true for queer youth, and even more so for trans youth. Despite this, the cultural needle seems fixed firmly in our favor, at least in Hollywood. The word of the day is gay, and we were out in full force at this auspicious event. So let’s explore the gayest moments at the 94th Academy Awards.

On the Red Carpet

If there’s one thing we know how to do it’s how to work the runway. Queer stars turned it out in some instantly classic looks to start the night right.

This look captured our gay hearts and still hasn’t let go. It’s the dripping rainbow beads for me.

The pants, the neckline, the hair, the cape. Everything is exactly where it needs to be. I have not yet recovered from this look, styled by Zadrian and Sarah. I could say a lot more, but this was only one of DeBose’s queer moments that evening.

I’ll be honest, Page could show up in a t-shirt and jeans and I would be screaming “iconic, trendsetting, never seen before”. Honestly, I stand behind that decision. It may be a black tux, but Page looked so handsome in his Gucci suit that I don’t think it needs justifying.

Lena Waithe is a fashion mogul, and I don’t think enough people should appreciate that. Waithe is wearing this suit by ZEGNA. I mean, look at the material.

Related | Wanda Sykes Is Among This Year’s Oscars Hosts

Queer affection was on display at the event, and we love to see it. Though it’s disappointing that the simple act of holding hands as a queer couple makes a statement, that is where we are.

It isn’t just us that appreciate the importance of visible queerness, especially given the timing. Wanda and Alex dazzled onlookers with a bright white suit and a shimmery champagne gown.

At a time when some -including in my home state of Florida- would like to ban and marginalize #LGBTQ, I am grateful to my friends @iamwandasykes and her wife, @IamAlexSykes, for proudly showing that families come in all sorts of configurations. Love is love. ❤️🧡💛💚💙💜 pic.twitter.com/Sn9X8o9CVn

kristen stewart and dylan meyer kissing in front of the oscars backdrop it’s just so precious and important i cant stop thinking about how this would’ve been unspeakable not so long ago pic.twitter.com/ka97ENHcRp

Speaking of kisses, Niecy Nash and “hersband” Jessica Betts had the most glamourous and lovely date night. They also shared a kiss on the red carpet, as Nash carried a clutch that read “Wifie for Lifey.” I don’t think there is any possible way to be more visibly queer than that,

Kicking It Off Gay

The tone was set for the evening by the three female hosts (an Oscars first by the way). Wanda Sykes, Amy Schumer, and Regina Hall rightly declared that the night would be gay! “Well, we’re going to have a great night tonight,” said Sykes. “For you people in Florida, we’re going to have a gay night.” The hosts also took a moment to take a jab at Mitch McConnell which is always appreciated.

“WE’RE GONNA HAVE A GREAT NIGHT TONIGHT—AND FOR YOU PEOPLE IN FLORIDA, WE’RE GOING TO HAVE A GAY NIGHT.”pic.twitter.com/pcjhQGRXDT

That’s right, DeBose also gets a whole category to herself, as she should. The actress made history by becoming the first queer woman of color to win an Oscar. She won the award for her portrayal of Anita in Steven Spielberg’s remake of West Side Story. If that wasn’t enough, DeBose said it plainly in her acceptance speech. “You see an openly queer woman of color, an Afro-Latina, who found her strength and life through art,” said Debose. “That is, I think, what we’re here to celebrate. So if anyone has ever questioned your identity, I promise you this — there is indeed a place for us.”

DeBose underscored this again during her backstage speech.

Recovering hipsters everywhere gasped when we collectively realized that Juno turned 15 this very year. To celebrate the birthday of this beloved classic, our favorite Elliot Page took to the stage with his co-stars Jennifer Garner and JK Simmons. I don’t think my poor gay heart was ready for this reunion, but seeing Elliot up there healed something in me. Take a look for yorself.

This one is two-fold. Chastain won the best actress Oscar for her performance as Tammy Faye Bakker in the biopic The Eyes of Tammy Faye. Despite her background in Christian fundamentalism, Tammy Faye became a queer icon, appearing in Gay Pride marches with the likes of Lady Bunny and Bruce Vilanch. She refused to denounce homosexuality and also expressed compassion toward, and urged support for Americans with HIV/AIDS at a time when that was mostly unheard of.

During Chastain’s speech, she took the opportunity to nod to the wave of hateful anti-LGBTQ+ bills sweeping the nation. “We’re faced with discriminatory and bigoted legislation,” said Chastain, saying that their only goal is “further dividing us”.

The Power of the Dog

Before we touch on the last moment, let’s appreciate the Best Director win for the very queer cowboy movie, The Power of the Dog. The film is an adaptation of the 1967 novel by Thomas Savage. Since its release, audiences have been sharing their praises for the queer-themed Western drama which stars Benedict Cumberbatch, Kirsten Dunst, Kodi Smit-McPhee, and Jesse Plemons.

I had to finish off the list by mentioning this tearjerking moment. Both queer icons in their own right, Gaga and Liza Minnelli took to the stage to introduce the Best Picture nominees, but also to celebrate. They were celebrating the 50th anniversary of Cabaret. If it’s not their shared adoration for one another or the whispers of encouragement, then surely Liza’s exuberance and joy will start the waterworks.

This is like a lesson in how to facilitate older people while honouring who they are.
What a class act by @ladygaga with legend Liza Minnelli.
The conferred whispers of “I gotcha” “I know” picked up by the mikes make it especially touching.pic.twitter.com/2JOWyrTQxn

The Gayest Academy Awards Yet?

In many ways, the Academy Awards are just an award show. At their worst an opportunity to showboat and inflate egos, but at their best, we catch glimpses of ourselves. This may well have been the gayest Academy Awards yet. Here’s hoping that they will only get gayer.

8 Gayest Moments at the 2022 Academy Awards