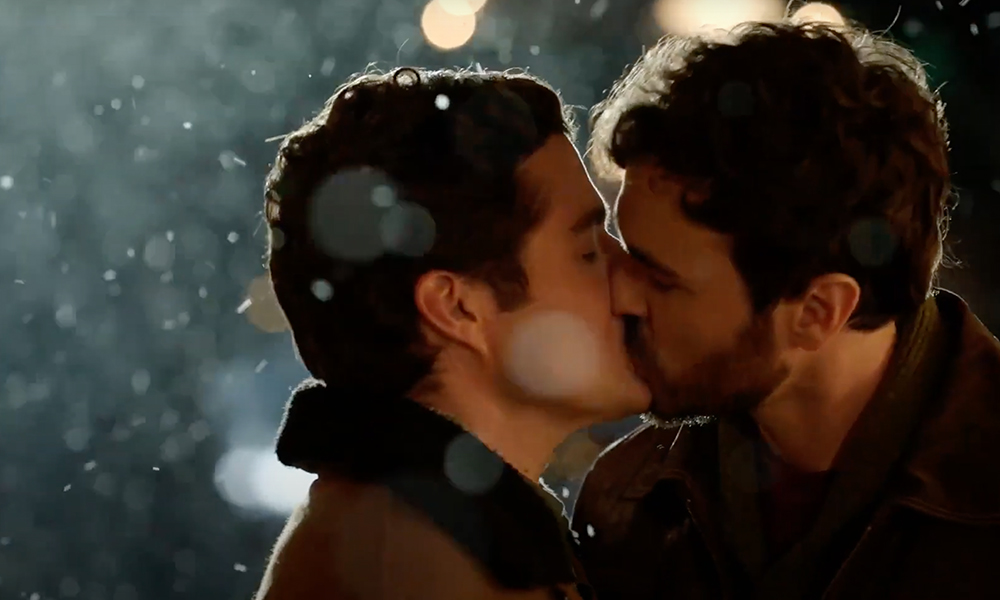 Looking for gay holiday movies to stream? Here are 7 LGBTQ+ holiday films to add to your list.

It may be a little early, but we’re already getting into the holiday spirit here at Gayety. Partly because we love it, but also because we’re looking for something — anything — worth celebrating right now.

If you’ve been following closely, you may have already heard rumblings that this year could be one of the gayest holiday seasons yet. So sit back with some mulled wine, preferably in plaid pajamas, and take in the queer cheer.

Friendsgiving
On the first gay of Christmas, Amazon gave to me, Thanksgiving with your chosen family. Those of us living away from our parents will be especially familiar with this concept. Many of us will be spending the holidays exclusively with our social bubble, which doesn’t always include our parents. On the positive side, you’ll at least avoid the drama of sitting at the dinner table next to your MAGA-supporting uncle. Having said that, this instant classic doesn’t skimp on the drama. Kat Dennings plays an, unfortunately lonely, queer woman alongside the likes of Malin Akerman, Chelsea Peretti, Wanda Sykes, and Aisha Tyler.

The Christmas House
On the second gay of Christmas, Hallmark gave to me, their first queer holiday movie. You might remember the widespread criticism Hallmark Channel drew last year following the removal of a commercial by wedding registry Zola that featured a same-sex couple. Hallmark made the decision after pressure from One Million Moms. No surprises there.

This year, Hallmark hopes to make good with the help of Jonathan Bennett and Brad Harder. The duo play husbands Brandon and Jake, spending the holidays with Brandon’s parents Phylis (Sharon Lawrence) and Bill (Treat Williams). The couple is anxiously awaiting a call about the adoption of their first child. Unfortunately, their storyline isn’t the main plotline, but we’ll reserve our judgment until we’ve seen it.

You may remember Bennett from his portrayal of Aaron Samuels in the 2004 breakout hit Mean Girls.

Watch The Christmas House on Amazon.

The Christmas Setup
On the third gay of Christmas, Lifetime gave to me, queer holiday visibility. A Christmas Set Up follows Hugo, a corporate lawyer in New York heading home for the holidays. There his mother has been secretly planning to set him up with his high school crush, Patrick. It all goes according to the plan until Hugo faces a tough decision — accept a big promotion in London or remain in Milwaukee.

Watch The Christmas Setup on Amazon.

Happiest Season
On the fourth gay of Christmas, Hulu gave to me, Kristen Stewart and Dan Levy! Thank God for Clea DuVall and Happiest Season. DuVall, known for her work on Girl, Interrupted, and appearances on shows like Broad City and Veep, has assembled an all-star cast to give us a very lesbian Christmas.

Kristen Stewart plays Abby, who is head over heels in love with her girlfriend Harper, played by Mackenzie Davis. The two have plans to spend Christmas at Harper’s family home, but there is just one problem. Harper isn’t out yet, and her parents are conservative. It is every gay’s nightmare.

In an interview with People, Stewart explained that she had never seen herself represented in this genre. “I’ve wished to see a gay Christmas rom-com my whole life,” said Stewart. “I’m so happy and proud of Clea for bringing this into the world. We couldn’t have had a better, more loving pack of weirdos supporting each other on this one.”

Dashing in December
On the fifth gay of Christmas, Paramount gave to me, two gay cowboys! In Dashing in December, New York City investor Wyatt (Peter Porte) returns home for the holidays to convince his mother, Deb, played by Andie MacDowell, to sell her farm. When he arrives, Wyatt meets a handsome ranch hand, Heath (Juan Pablo Di Pace), working on the property, which doubles as a holiday attraction.

In true holiday-movie fashion, the men have instant chemistry. We’d be willing to bet Wyatt changes his mind and decides his mother should keep the ranch. He’ll then leave the Big City to move home and live his happily ever after with Heath on the farm.

Watch Dashing in December on Amazon.

Dash & Lily
On the sixth gay of Christmas, Netflix gave to me, a gay brother and a drag queen. Based on the Dash & Lily’s Book of Dares by Rachel Cohn and David Levithan, this holiday rom-com is less gay, and more ally. The movie tells a story of romance that develops between Dash (Austin Abrams) and Lily (Midori Frances) through entries in a red notebook and blah, blah, blah you get it — they’re straight. More importantly, the show also features Lily’s queer brother Langston, played by Troy Iwata.

I Hate New Year’s
On the seventh gay of Christmas, Tello gave to me, a lesbian New Year’s movie. What better way to top off the season than with an angsty story of unrequited lesbian love? In the throes of writer’s block, rising music star Layne Price (Dia Frampton) heads home to Nashville in the hopes of bumping into her ex and rekindling their love (and her creativity). Meanwhile, her BFF Cassie (Ashley Argota) finds herself developing feelings for Layne.

Related | How to Juggle Two Lovers During the Holidays

Maybe it’s Candis Cayne’s camp portrayal of a fortune teller, but I have a feeling this will all work out for the best. I suppose we’ll have to wait and see.

So far there are only seven gays of Christmas, but we’ll update this list if and when that changes.