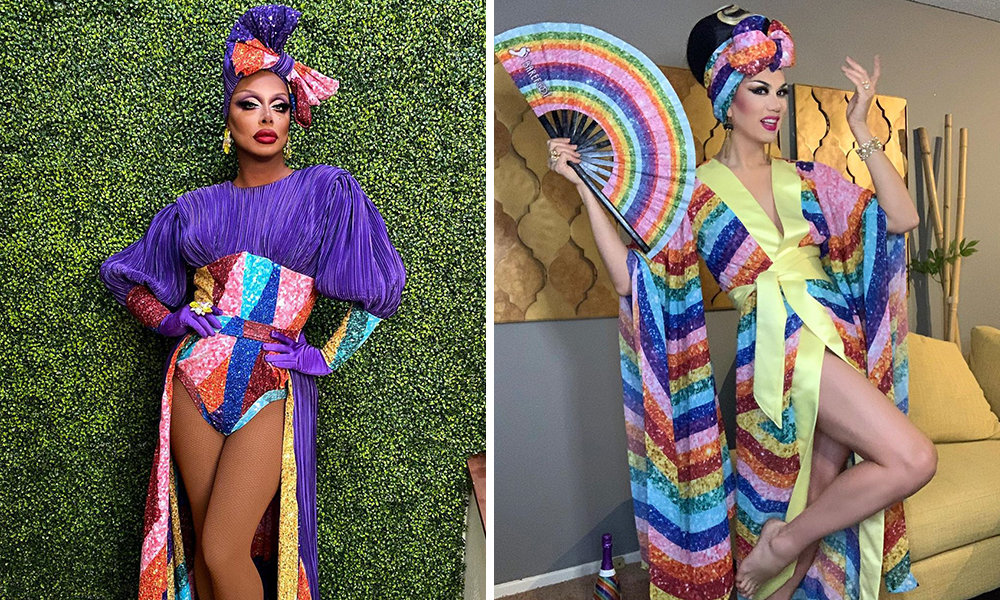 These fan favorites teamed up with Barefoot to design four original looks that celebrate the progress of the LGTBQ+ community.

Raja, Manila Luzon, Eureka O’Hara, and Raven. This fierce foursome makes up the House of Barefoot, a drag family formed to entertain, educate, and raise funds with fashion, and a little help from Barefoot Wine & Bubbly.

Barefoot is no stranger to allyship with the LGBTQ+ community, and this is no exception. They teamed up with World of Wonder to launch a collection of four one-of-a-kind looks that reflect significant milestones in LGBTQ+ history. Each queen received a stunning fabric based on Barefoot’s first-ever limited-edition Pride Packaging Collection, and a unique theme to inspire their design. The queens revealed their finished looks on a very special PRIDE episode of World of Wonder original series, Fashion Photo Ruview.

Raja, season 3 winner of RuPaul’s Drag Race, followed the design honoring Chosen Family. This concept is something very familiar to LGBTQ+ people, especially those forced to find a family in their LGBTQ+ friends and community. In the video reveal, Raja says that she was trying to evoke a feeling of “radiating and light [..] and harken back to the idea of 1969 and 1970.” It’s safe to say, mission accomplished. “It also covers my gut, so…” she added. I feel that, Raja.

Manila, season 3 standout and 2-time All Stars competitor, received the design that represents the fight for marriage equality. This victory may feel long won, (2020 has been a decade long) but the supreme court victory just turned 5 years this year. “I wanted to have a very romantic kimono […] like I was on my honeymoon,” said Manila. Honestly, nothing says “love is love” better than a rainbow kimono. “This is something I would throw on just to pick up room service,” she added. I love this vibe.

Like a phoenix from the ashes, Eureka is back! The fierce season 9 and 10 competitor used the pattern celebrating LGBTQ+ trailblazers. We can’t think of anything more fitting for this tenacious queen. Speaking of fitting, she was cinched in all the right places. “I just wanted it to be warrior-esque,” said Eureka. The other queens were clearly gagged by her incredibly detailed headpiece. “I love as elevated Drag as possible, I love to be the most,” she added. Oh, it’s the most, Eureka.

Last, but not least, we have Raven. Runner-up in both Season 2 of RuPaul’s Drag Race and Season 1 of All Stars, Raven is also an Emmy nominated makeup artist and RuPaul’s personal makeup artist. Raven’s inspiration? The spirit of Pride, honey. The makeup is flawless. The gown is flawless. She is serving spirit, pride, the whole fantasy.

It goes without saying that the queens slayed this gig. We’ve got fashion, we’ve got LGBTQ+ history, and we’ve got charity. A portion of the proceeds from the Pride Packaging Collection sales, up to $60,000, benefits Free Mom Hugs, a non-profit organization of parents and allies working toward full affirmation and equality for all. “At Barefoot, we know we are better and stronger together,” said Anna Bell, Vice President of Marketing at Barefoot. “We encourage our fans to proudly show their Pride and join together to virtually cheers to the LGBTQ+ community.”

“We’re thrilled to be partnering with Barefoot, a company that’s proudly supported the LGBTQ+ community for as long as we’ve been in business,” said World of Wonder co-founders Randy Barbato and Fenton Bailey. “It’s a lovely reminder of how far we’ve come and the power of working together to drive progress in the future.”

For more information about Barefoot’s long-standing allyship to the LGBTQ+ community, visit: https://www.barefootwine.com/lgbtq