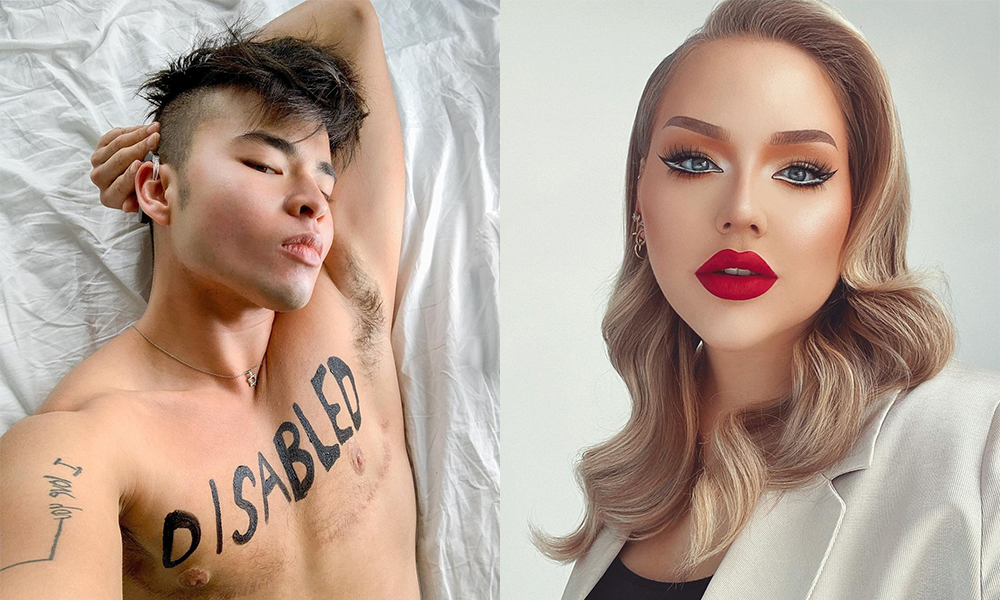 18 Trans and Non-binary YouTubers You Need To Watch

If you’re looking for your next favorite transgender YouTuber, you’re in luck. We’ve watched hours of content and picked out a few favorites. Read on as we take a look at some of the most famous trans and non-binary YouTubers, in no particular order. 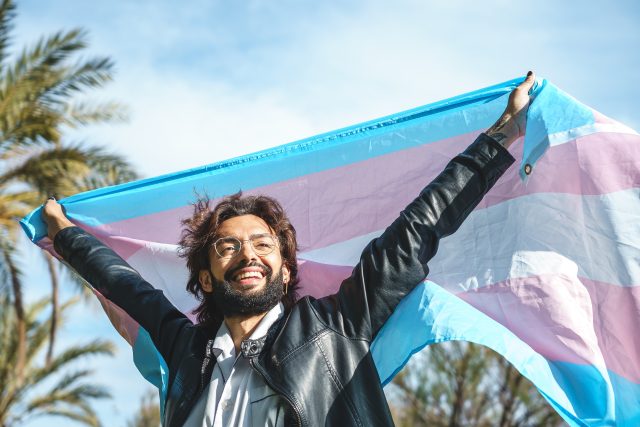 You can’t talk about trans YouTubers without leading with Kat Blaque. Kat started her channel back in 2005—when YouTube literally began. She was among the first wave of YouTubers and has outlasted many of your favorites. This is especially true for transgender YouTubers. An illustrator, animator, and public speaker, Kat makes videos about race, gender, politics, and pop culture.

Ultimately, in her own words, Kat’s content is about “how we can relate to each other more and fight against the things that divide us, while not losing sight of our own boundaries.”

NikkieTutorials is a goddess in the realm of beauty Youtubers – and over 14 million people agree. While her content isn’t particularly trans-focused, she advocates for inclusivity, self-love, and living your most authentic life, no matter what that looks like.

Her videos range from talking about her everyday life to walking viewers through cool and creative makeup tutorials (hence the name!) However, she doesn’t just stop there. From time to time, Nikkie will sit with other YouTubers and celebrities and serve up makeup tutorials and interview realness.

PhilosophyTube’s about section reads: “giving a Philosophy degree away for free” – and that’s exactly what Abigail Thorn does. Her long-standing channel acts as a meeting place for the academe and entertainment to collide, with many videos delving deep into complex topics like love, war, power, and queerness.

But what sets PhilosophyTube apart from the armchair philosophers of YouTube is her undeniable intelligence and mastery of her craft. Every video is well-planned and researched while remaining relevant to modern life. Even her coming out video was part performance, part discussion on what it means to live as a transgender person.

Arrows is a model, vlogger, television personality, and film producer. He rose to popularity on YouTube with his channel Tomboyish, in which he explored topics relating to gender and sexuality. They have since migrated to their new channel ARROWS where he makes videos exploring his art and identity.

Fitz received a nomination for Best Social Media in the LGBTQ+ YouTube Channel category at the 9th annual Shorty Awards. It’s not hard to see why. His take on social media and influencer culture is refreshing, and it allows his art to live and grow organically on his channel. It’s a pleasure to watch. Arrows is releasing a new series with fellow Black queer YouTuber Jade Fox, (who we can’t recommend enough) called Supertime.

If you had to pick out one of the most popular trans Youtubers for your sweet old grandma, then Jammidodger would probably be your best bet. His videos are charming and entertaining without being too clean or kid-friendly. Instead, he leans heavily on reacting to LGBTQ-focused memes, TikToks, and other related content in an easily digestible way.

In short, if you’re looking for a likable trans YouTuber with a good sense of humor and an endearing personality, then Jammidodger is your man.

Watching a MilesChronicles video is like rediscovering the wonders of your old favorite low-budget Nickelodeon teen show… except everyone is hopelessly gay. That’s not a knock against chaotic curly-haired Miles McKenna, though. On the contrary, it’s a shining recommendation for gay and trans teens across the world.

Where other LGBTQ-focused YouTubers might pepper in research and dissect difficult topics with an academic eye, MilesChronicles relies on his personal experiences of coming out. As a pop-punk trans icon, his videos are chaotic, musical, and fast-paced – perfect for the young queer teen.

Ty Turner is one of the best trans YouTubers because of his warm personality and great sense of humor. Sitting down with a Ty Turner video feels like catching up with an old friend with whom you used to love having classes in high school. He walks his viewers through a variety of content styles, from laughing at memes to literally attempting the army fitness test.

That said, his content does have a trans-focused spin to it. From videos about transitioning to FtM-oriented workout regimens, Ty Turner is a trans guy’s number #1 resource for being their best self.

Natalie’s video creations are part-arthouse film and part-philosophical treatise. She dives into broad topics like addiction, cringe culture, and voting with an incisive wit and a dry sense of humor. Natalie doesn’t post often, but when she does, it’s a real event within the online LGBTQ community. Her insights are always unique, poignant, and incredibly well-thought-out.

It goes without saying that people looking for a quick laugh should look elsewhere. But, if you’re looking for content that really makes you think, then it’s time to step into Natalie Wynn’s world.

While we’re on the topic of video making as an art, let’s talk about Ash. The editing, animation, dialogue, and music choices in Ash’s videos are perfect in every way. It’s hard to watch Ash’s videos without appreciating the painstaking work Ash puts into every second.

Like most trans people on the internet, Ash has been subject to quite a bit of really scary harassment. Thankfully Ash still makes videos from time to time, and each one is a blessing. These videos are at once new, fresh, and well-produced as well as pieces that remind us of a simpler time. A time when YouTubers set their cameras up in their bedrooms and told us how they feel.

Speaking of YouTube back in the day, who can forget Miles Jai? Her “Like Mah Status,” video was a cultural reset and we are not taking any questions about it at this time. While she continues to stay true to her roots in online sketch comedy, most of her videos today focus on makeup and beauty. Their Weave We view series is an instant classic and a shining example of their charisma and quick-witted sense of humor.

Drop in for a live show sometime, you won’t regret it!

Jackie Rabbit is an older trans creator who shares her experiences of transitioning as an older person. She talks at length about ignoring the rules others set out and forging your own path to authenticity – a message that often resonates with her audience.

Watching Jackie can feel like sitting down with your trans mom who just wants the best for you. She’ll talk lengthily about dealing with “bad behavior” and “not letting fear control your decisions” and will always be in your corner.

Chella is at the intersection of countless things. He is an artist, actor, writer, model, public speaker, and online creator. He is also deaf, genderqueer, trans-masculine, Chinese, and Jewish. Chella’s work and identity contain multitudes, and his videos reflect that. If you’re looking for queer content that comes from an artistic point of view, we recommend Chella.

NOAHFINCCE embodies the chaos and creativity of the alternative trans boy on Tumblr that most of us were probably crushing on at 14. His YouTube channel has all the regular bells and whistles of the modern content creator: vlogs about his relationship, reacting to transphobes and reviewing memes on video. However, one thing sets Noah apart from the rest of the entries on our list: his music.

NOAHFINCCE masterfully captures the pop-punk sound of the early aughts and combines it with the TikTok-isms of the 2020s. The result is a perfect storm of relatable lyrics and cheeky jabs at pop culture.

There are a few video essayists on this list, but none are quite as sincere in their work as everyone’s “cool, fun, millennial aunty” Khadija Mbowe. They are a non-binary singer, entertainer, educator, actor, writer, voiceover artist, and kick-ass creative. Their videos are equal parts genuine and well-researched. It’s clear that Khadija wears their heart on their sleeve and genuinely asks themselves what impact their work will have on the people watching.

Come for their thoughtful essays on race, sexuality, and pop culture, and stay for their loveable personality and impeccable vocals.

Being trans isn’t a “choice” or a “lifestyle,” and Victoria Rose understands that. So, where many YouTubers would shy back into being stubbornly politically correct, Victoria approaches things head-on with a mission to be as honest as possible about her experiences as a transgender woman.

Her philosophy is that the world can be unkind to trans folks, and arming them with the knowledge to feel safe can make a difference. She discusses controversial topics like “passing” as an MtF trans person while treating the subject with tact and respect.

Let’s roll back the clock to a time when Harry Potter was just a magical story to escape to. This is where Jackson got his start on YouTube, with the Harry Potter Alliance nonprofit. A lot has changed since then, and Jackson’s fans have gotten to watch him grow the whole way. Jackson is an author, creator, public speaker, and LGBTQ advocate. He also made a name for himself waffling random things online to see what happens.

Yes, you heard that correctly. Now Jackson spends his time writing, acting, and advocating for LGBTQ+ folks. It’s hard not to love Jackson, but your welcome to find out for yourself.

Is Ts Madison a “YouTuber” per se? Debate that all you like, but she does have a YouTube channel. Checkmate haters. More to the point, if you aren’t tuning into her YouTube live shows, you are missing out. Ts Madison Hinton is an American reality television personality, actress, and LGBTQ+ advocate.

Madison rose to fame on Vine in 2013. At this time she was starring in adult films, and she has gone on to appear alongside RuPaul and Todrick Hall. Most recently she appeared in Billy Eichner’s bros as part of its “historic all-LGBTQ principal cast.” Also, we can’t tell you how many times we think of the “Selena weren’t Puerto Rican?” clip.

We can’t leave you without sharing one of our all-time faves, Jessie Gender. If you love all things nerdy and all things queer, Jessie lives at that exact intersection. Her videos are informative, heartfelt, and unashamedly nerdy. Her rise in popularity brings us so much joy because we know how much she deserves it.

Keep Up With The Trans Times

There are more trans content creators than ever, and they’re putting out some of the bravest, most entertaining, and most educational content on Youtube. If you want to be up-to-date on the latest news, tidbits, and up-and-coming LGBTQ creators and influencers, keep reading Gayety!

18 Trans and Non-binary YouTubers You Need To Watch