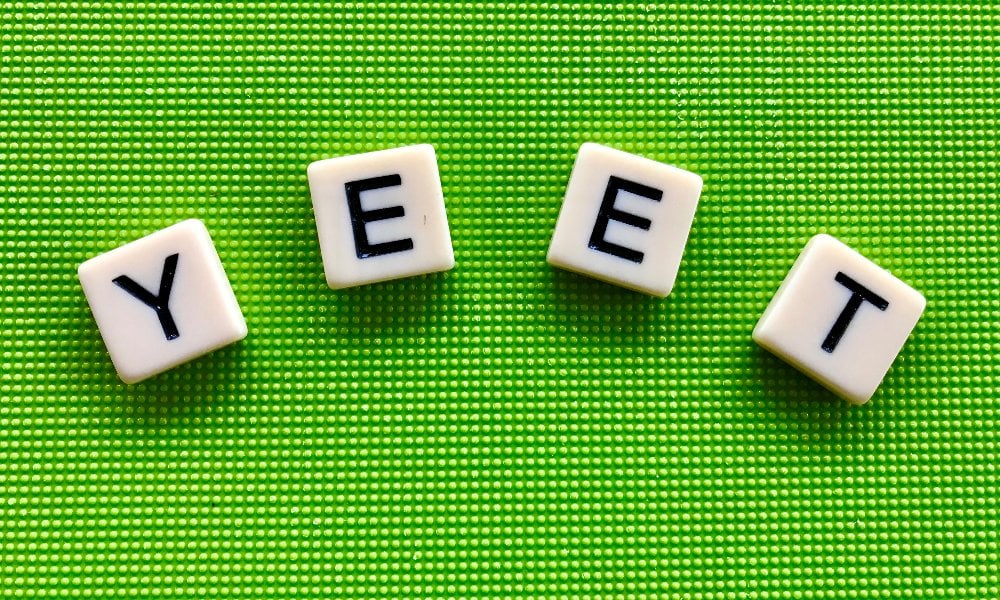 Yeet Definition: What It Means & How To Use It

Like the birth of most Internet slang, the definition of “yeet” wasn’t immediately obvious. Was it a noun? A verb? A mere exclamation with no actual meaning? At the time, “yeet” circulated at the speed of light yet left many without context.

Now, the word is a regular part of today’s Internet lexicon and has more meanings than one. If you’re still struggling to grasp the word “yeet”, this guide will tell you what it means, where it came from, and how to use it. 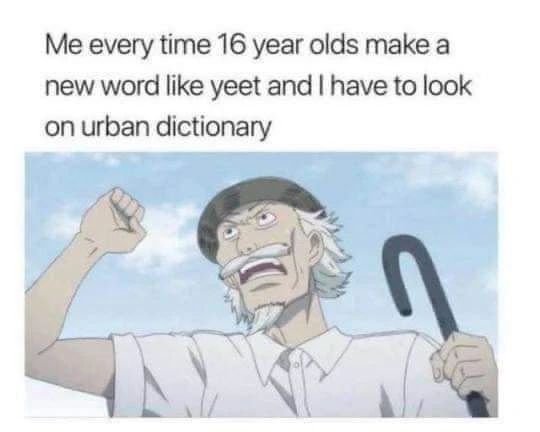 The basic meaning defines it as a verb that means “to throw” (e.g., “I am going to yeet this thing out the window”). It also emphasizes the sheer aggression with which the item is thrown. If you were to yeet something, you wouldn’t do it gently. As of 2021, Urban Dictionary’s top-rated definition described “yeet” as “discarding an item at high velocity”.

Another definition is an exclamation of excitement, enthusiasm, or surprise.

You can also use the word in the context of sports. User Bubba “Skoal” Johnson published an alternative meaning on Urban Dictionary, defining as a “term used to express excitement; especially used in basketball when someone has shot a three-pointer that they are sure will go into the hoop”.

While not necessarily a nonsensical word, many use the term out of context or to mean whatever they want it to mean. 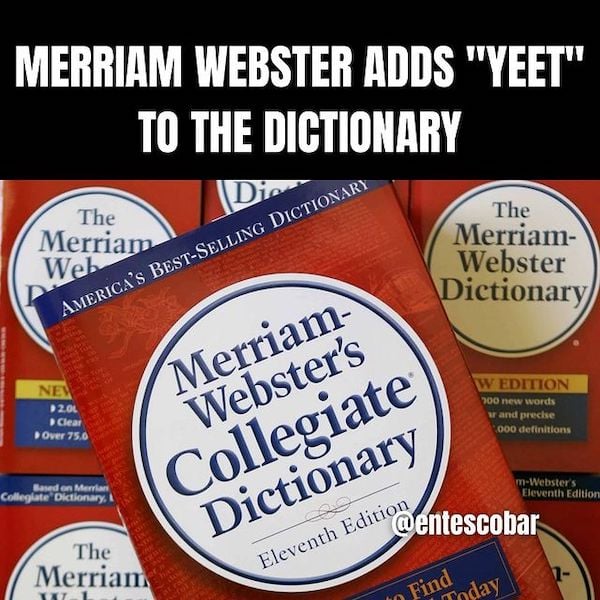 Origins Of The Word “Yeet”

“Yeet” made its first rounds on the Internet in 2008. Initially, Urban Dictionary defined it as “an excited exclamation, particularly in sports and sexual contexts”. It also compared the word to other interjections like “Yeah!” and “Ayt!”

However, the word didn’t garner international attention until 2014 when YouTuber Milk Fullilove called out “yeet” as he danced to personal choreography. Fans dedicated an entire Facebook page called Yeet Dance to honor the choreography, and it amassed nearly 30,000 likes by the end of March 2014.

Soon after, the word made its way onto other platforms like Vine when hip-hop musician Quill released a song entitled “YEET” featuring other upcoming artists like Showtime and Yung Cyph. Yeet’s virality was unstoppable and became even more exponential when Vine user Lil Meatball recreated Fullilove’s original dance to the song “YEET”. The Vine garnered over 122,00 re-posts and 104,000 likes in just two weeks.

Internet users then released variations of the original dance, which inspired dozens of yeet memes.

After a temporary lull following its initial boom, it again became viral in 2016 when a video of a woman exclaiming, “Yeet!” while tossing an empty can into a crowd of high schoolers made its rounds on the Internet. It then regressed into its original meaning, with many people using the term as an exclamation when playfully tossing something at someone.

Controversial YouTube Logan Paul coined a variation of the term, using “ya yeet” as a catchphrase. It then reached a second lull until 2018, when it entered Reddit space under the subreddit r/dankmemes. Users discussed its sudden obscurity, using it in extreme contexts outside its original meaning.

Despite its fluctuation in popularity, it won the award for Slang/Informal Word of the Year by the American Dialect Society in 2018. 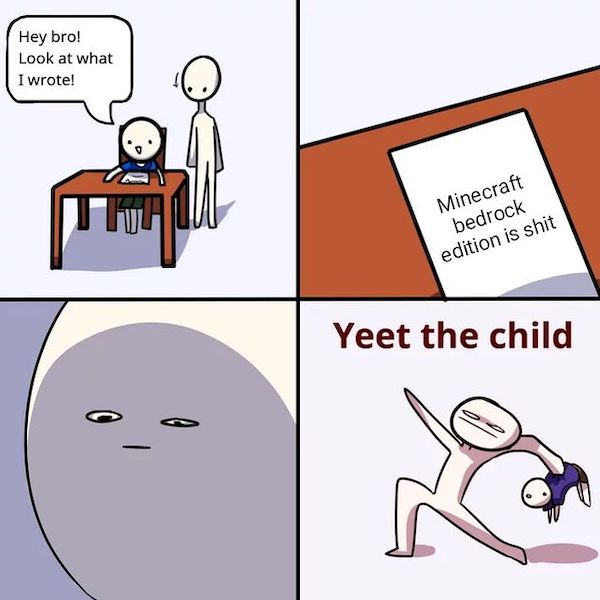 Where Is “Yeet” Today?

Since making its first appearance on Urban Dictionary in 2008, “yeet” now has over 270 pages of definitions on the website. The word also has official entries on Dictionary.com and Merriam-Webster.

It’s is also commonly used in games like Fortnite, which features animation from the original yeet dance as a character’s “emote”. However, most users refer to the move as “the dip”.

Some people also use “yeet” interchangeably with the word “sheesh” to express irritation at something or if you simply don’t know what to say. For example, “Did they really just say that to you? Yeet!”

How To Use The Word

While once tied to black culture, it is now universally incorporated into everyday language. You can use it spontaneously and in a positive context, as in “That’s awesome! Yeet!” It is comparable to other high-energy exclamations like “boo ya” or “hell yes!” Think of it like shouting out a meme.

You can also use it when you want to throw something, as in “Watch me yeet this into the trash bin.” As for what you are throwing, you can also yeet yourself, as in “I’m going to yeet myself into bed as soon as I get home.”

If you are using the word to mean “to throw”, the context in which you use it will also depend on the velocity at which the item or person is thrown. For instance, it might also mean to fly (e.g., “If you don’t slow this car down, I’m going to yeet right out the window.”)

However, you can technically use it in whatever context you want, as it lacks a standardized definition. For example, “I don’t really have yeet going on today. Do you want to just bum around?” or “I guess it’s time for me to yeet on home.” That said, you’ll want to avoid using it in a professional setting.

Some people have gone as far as conjugating the word. For example: 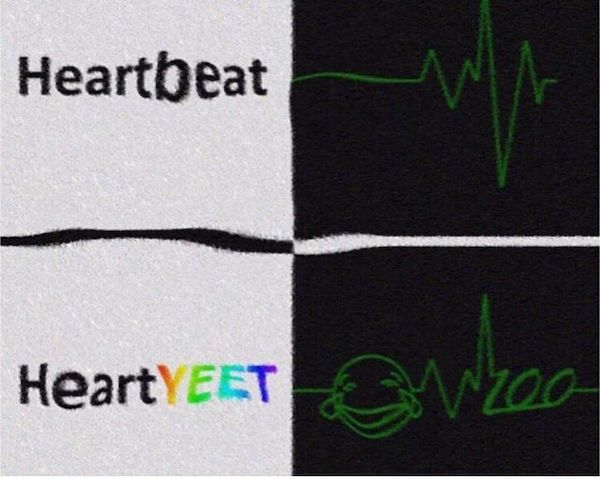 Since its humble beginnings in 2008, the word “yeet” has become a staple in everyday vocabulary (at least for younger generations). It’s most commonly used to refer to the act of throwing something but can also be used as an exclamation of joy or excitement.

However you decide to use the word, just remember to avoid using it in professional settings. You never know when you’ll get “yeeted” out of your meeting.

Yeet Definition: What It Means & How To Use It