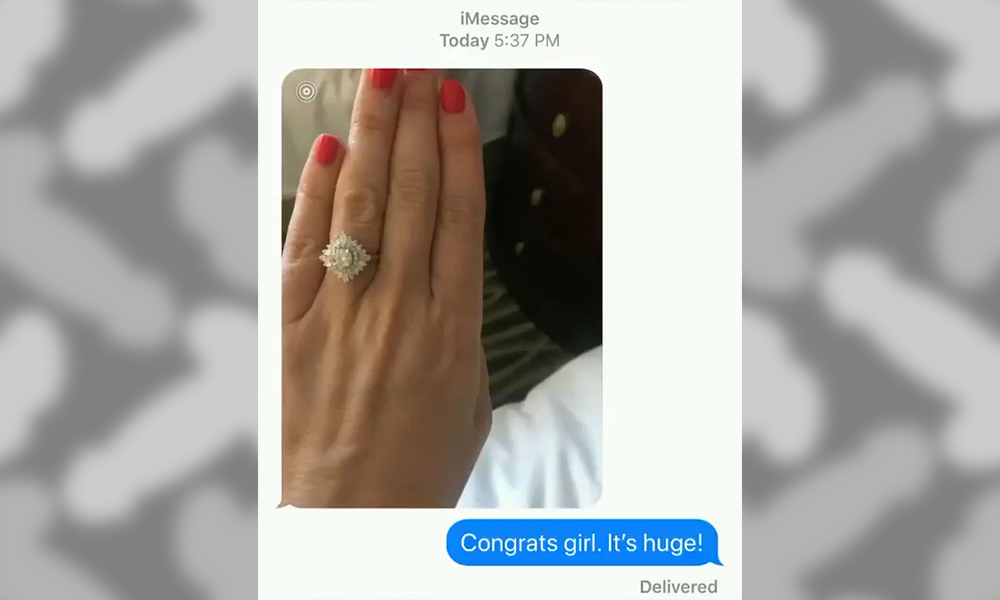 Woman Accidentally Shows off Her Fiancé’s Jock With Her Rock

The custom of giving a ring to one’s betrothed as a token dates back to the Romans who attached a small key to the ring suggesting the husband’s ownership of the woman who wore it. This tradition was later adopted by the Catholic religion and from there it slowly spread worldwide. Although the concept of using a pricey piece of jewelry as a symbol of commitment appears to be an action-driven by a nice sentiment, there is more than meets they eye! Far from being a way of commemorating a lifelong commitment based on sincere love, love has almost nothing to do with a ring at all.

For starters, an engagement ring is essentially sexist. There is a single universal truth that surrounds engagement rings and that is that they are traditionally only for women. Although in a bygone era this may have made sense, as most women did rely on men to be the breadwinners, today the gender implications that are associated with an engagement ring are quite problematic.

The ceremony in which a ring is given is an exhibition of the traditional gender roles, specifically those of ownership and control. Thousands of dollars were spent by the man simply to prove to the world that this woman is his. What an engagement ring is meant to denote, at least traditionally, is that the man possesses the woman. Although nowadays this may not be the way in which it is viewed, is it not problematic that only a woman will bear this public sign of her engaged status up until her wedding day?

Another thing we must ask ourselves is who linked diamond rings and engagements? Well, it was advertisers. Most of the expectations that surround diamond rings are not from tradition but from the very manufacturers of the rings. Sure, a diamond may last forever, but it is the folks at De Beers who cleverly crafted this catchy phrase.

Essentially, it was this slogan with its shrewd marketing campaign that changed the way in which Americans, and by default, the whole world courted. Since then, diamonds have become an entire industry whose focus is on more than just engagements. The epitome of the commodification of just about everything in modern society, including our most personal and deepest emotions, is diamond rings. Is it merely a coincidence that when De Beers began their marketing blitz, suddenly diamonds became a girl’s best friend?

We have all seen the obligatory “I’m engaged!” post on social media following a proposal. Normally, the spouse-to-be posts a flattering photo of their engagement ring with a caption like “I said ‘yes’!” or “I’m engaged!” But, sometimes things don’t go as planned.

Twitter user Nick Walsh Tweeted a Live Photo he received from his recently-engaged friend showing off her ring. The tweet reads: “Waiting for my friend to realize she sent us all a Live Photo…”

Related | Gus Kenworthy Shows Off His Summer Trunks by H&M

A Live Photo is a camera feature on many Apple devices that captures sound and movement a second and a half before and after a photo is taken to create a video-like effect. Lucky for the Twitterverse, that was just enough time for things to get interesting.

In the 5-second video, we first see a hand ornamented with a dazzling diamond. But then the woman’s hubby-to-be struts into the frame and whips out his impressive willy.

So, congrats, girl. It really is huge!

🍿 Waiting for my friend to realize she sent us all a Live Photo… pic.twitter.com/dh4cMBZbkp

Woman Accidentally Shows off Her Fiancé’s Jock With Her Rock