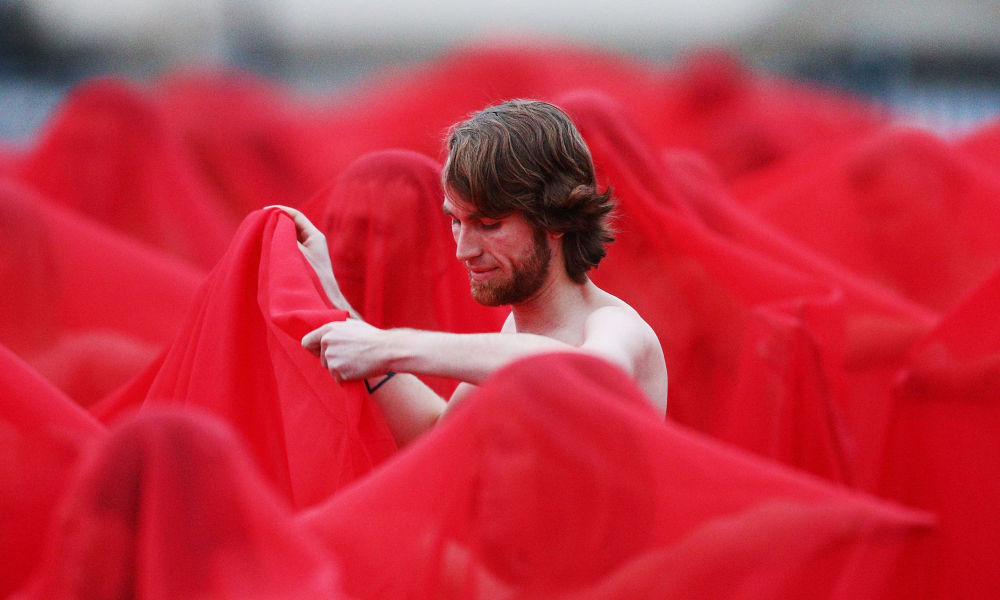 Hundreds of shivering Australians get nude for U.S. photographer Tunick.

MELBOURNE, July 9 (Reuters) – Around 500 Australians shivered in the nude for American photographer Spencer Tunick on Monday, braving the winter chill on a Melbourne supermarket rooftop for his latest mass nude shots.

The participants, chosen from 12,000 eager applicants, posed standing and lying down on concrete, covered only in transparent red fabric, with the temperature hovering around 7 degrees Celsius (45 degrees Fahrenheit) in the wind.

“I saw it come up online and I was like, ‘Yes! Like I have to get involved.’ Spencer Tunick I feel is legendary for subversive art, nude subversive art. I feel like Melbourne could definitely do with a dose of that,” Jane Louise, one of the participants, told reporters.

Participants didn’t have their gear off for too long.

“I worked quickly in order to keep them not from freezing and I think I got some beautiful artworks,” Tunick told reporters.

Thank you to all the participants in Melbourne who are about to brave the weather to pose for me. I’m so lucky for your enthusiasm. I’ll work as quick as possible to record the installation. See you soon! #returnofthenude @provocareonchapelst

Another participant, Belle Harvey, said: “Yeah, he was good fun. Every now and again we would laugh, and he would be like, ‘You need to be quiet. No smiling. Hands up’,”.

Woolworths, the owner of the suburban supermarket where the shots were taken, had at first refused to allow Tunick access to its car park, fearing it would inconvenience shoppers during busy weekend hours.

The retail giant relented when the artist agreed to take the shots on a quiet Monday morning instead.

Tunick was invited as part of a Melbourne arts festival.

The protests before the storm. #santiagochile 2002 Honored to have done something with my photography that went beyond art in Chile [email protected]_mac

Take a knee for Free Speech! It’s so much more than Free Speech, it’s the difference between right and wrong. Much deeper than that. @nfl @kaepernick7 @aclu_nationwide @mocacleveland

Thank you Sydney Opera House for understanding that the nude body in photography represented beauty and freedom in Australia not crime and violence. @provocareonchapelst @sydneyoperahouse