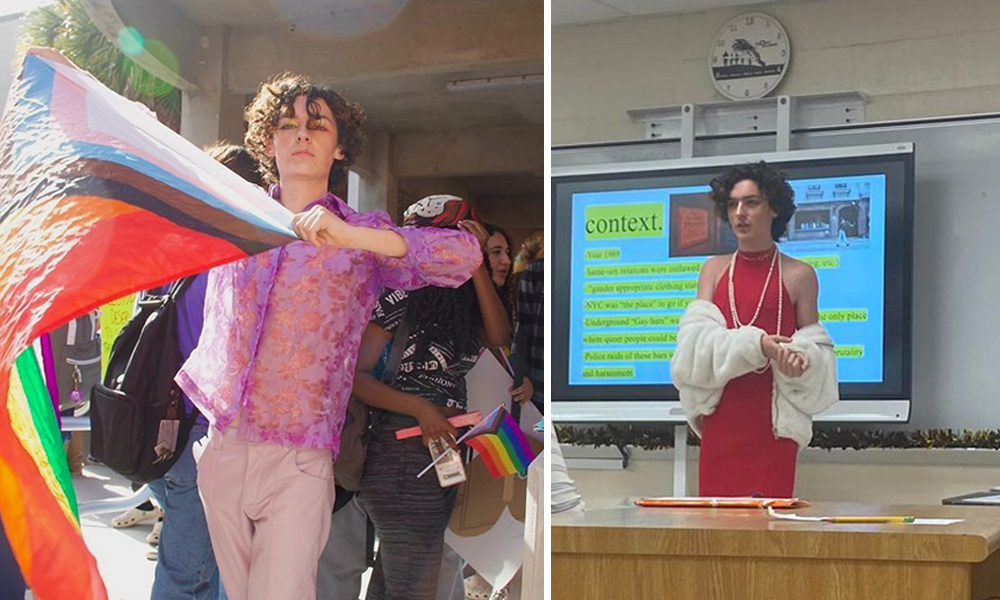 This Florida Teen Went Viral for Schooling Their Class on Stonewall

According to the 17-year-old, the school is now “investigating.”

Florida high school student Will Larkins has a bright future ahead of them. Not only is he the co-founder and president of the Queer Student Union at Winter Park High School, but they’re also an LGBTQ+ advocate. As the media frenzy surrounding the infamous Don’t Say Gay bill reached its height, the 17-year-old penned a thoughtful essay for the New York Times. They also testified against the final Senate hearing for the Parental Rights in Education Law. If all of that wasn’t enough, the teen has now gone viral for schooling their history class on Stonewall.

Larkins says they felt compelled to act when it became clear that Stonewall was absent from their history curriculum. The history teacher was also surprisingly unfamiliar with Stonewall. It seems like a huge oversight to exclude one of the major moments that propelled the country toward massive change for LGBTQ+ rights.

LGBTQ American history is not taught in Floridas public schools, so I took it upon myself to explain the events of the Stonewall Uprising to my 4th period US history class. #SayGayAnyway pic.twitter.com/A73TKPlWXF

Larkins wasn’t having any of it and took matters into their own hands. “LGBTQ American history is not taught in Florida’s public schools,” said Larkins in a tweet. “I took it upon myself to explain the events of the Stonewall Uprising to my 4th period US history class”. In the video, Larkins can be seen describing Stonewall as a tipping point. Dressed stylishly in a red dress and a string of pearls, they confidently take their class, and teacher, through this pivotal moment in queer history.

The video went viral on Twitter and currently has over 450 thousand views. Larkins shared the video with the hashtag #SayGayAnyway, making reference to the Don’t Say Gay bill, recently signed into the legislature in his home state. The legislation bans classroom instruction on sexual orientation completely in kindergarten through third grade. It is also vague enough to restrict educators from teaching about these subjects “in a manner that is not age-appropriate or developmentally appropriate for students in accordance with state standards”.

I want to put this to bed… @GovRonDeSantis @RonDeSantisFL @ChristinaPushaw

The #dontsaygaybill is NOT limited to Kindergarten Thru 3rd grade. But don’t take it from me, take it from the bill sponsor…

The video received an uproarious response, both positive and negative. Bizarrely some users wondered why Larkins “had to wear a dress,” to which they responded beautifully.

Horrifyingly, there have also been responses accusing Larkins, who is a minor, of being a “groomer”. This is part of an ongoing homophobic attempt to vilify and denigrate LGBTQ+ people.

Recently, I have received what feels like endless threats, homophobia, and people calling me a groomer/pedophile. i’m 17 and seeing what people say about me is scary. This is a direct result of Desantis homophobic rhetoric. They are attacking minors. Protect kids.

This practice is not new. In fact, it was a favorite for anti-LGBTQ+ folks as early as the 50s. The recent uptick in its frequency is likely directly related to the messaging surrounding the Don’t Say Gay legislation and its various copycat bills.

To make matters worse, according to Larkins, they are currently being “investigated” by the school for this lesson. Larkins says that this is because their “history teacher [didn’t] like it”. Larkins also had to speak to the principal for sharing a video of a fellow student trampling a Pride flag during their schools’ walkout.

By the way, I was also put under “investigation” by my school for “bullying” this student after posting a video of this incident on tiktok https://t.co/qawyZPkZrD

According to Larkins, he was one of “probably hundreds” who posted the same video, one of which got 6 million views. “I was the only one under investigation,” said Larkins. “I wonder why.”

Well, I’m sure you could guess.

This Florida Teen Went Viral for Schooling Their Class on Stonewall