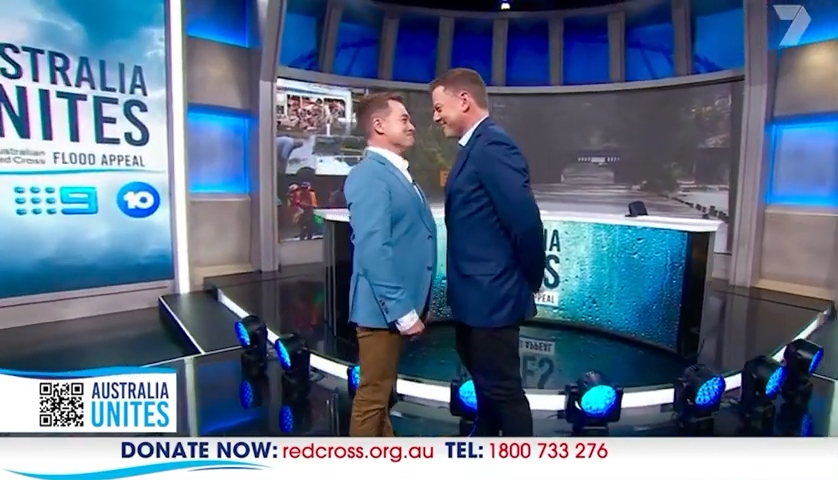 These Straight Hosts Made Out on TV for Charity

Do the ends justify the means? That is the question we’re asking ourselves after watching this clip. During a live fundraiser for the Red Cross, two straight Australian TV hosts made out for a $50,000 donation. The fundraiser, called Australia Unites, was held to raise funds for flood victims. Last month floods in eastern Australia, the worst in the country’s history, have killed at least 22 people and cost at least $2.5 billion in damage.

The fundraiser was progressing normally when an anonymous “major Australian corporation” pledged the massive sum. In return, they asked that TV host Gran Denyer and sports reporter Ben Fordham “pash.” What does “pash” mean, you might be wondering. Basically, it’s a passionate kiss. “Are we talking mouth open, closed?” co-host Amanda Keller asked.

“I think open mouth!” Denyer responded. It didn’t take long for the two straight married men to stand face to face, ready to lock lips. Before you can blink, they are on the floor locked in an embrace, their mouths very much open. “I think I nearly swallowed half of your face,” Denyer said lifting himself up from the floor. “That just happened, Australia. If you can’t donate $5 for that you don’t know what quality entertainment is.”

The hosts shared a “cuddle” and were quite touchy for the rest of the clip. Denyer caressed Fordham’s face, kissed his cheek, and even sat on his knees after the pashing. In the end, the fundraiser garnered over AUD$25 million (about USD$18 million). It may be important to note that this is not the first time these TV hosts have done exactly this.

Straight Hosts Made Out For Laughs

You know it was coming to this. Despite the obvious good that this donation will do, does this actually pass as “quality entertainment”? Many LGBTQ+ people have taken to Twitter to argue that it trivializes same-sex intimacy, making queerness the butt of the joke. Indeed, this is a joke that most Gayety readers will already be intimately familiar with. We’d like to know exactly which “Australian corporation” made the request.

I’m uncomfortable about the way that men kissing men and people cross dressing is being encouraged as a joke for charity on the Australia Unites. Please don’t mock and joke about these things in the name of entertainment #floodappeal #australiaunites

So, do the ends justify the means? Did you hate it, or was it all in good fun? While you decide, Fordham will be recovering from his “pash rash.”

Thanks to everyone who has supported the flood telethon #australiaunites and thanks ⁦@grantdenyer⁩ for the pash rash 💋 pic.twitter.com/2qJlHFOkfd

These Straight Hosts Made Out on TV for Charity