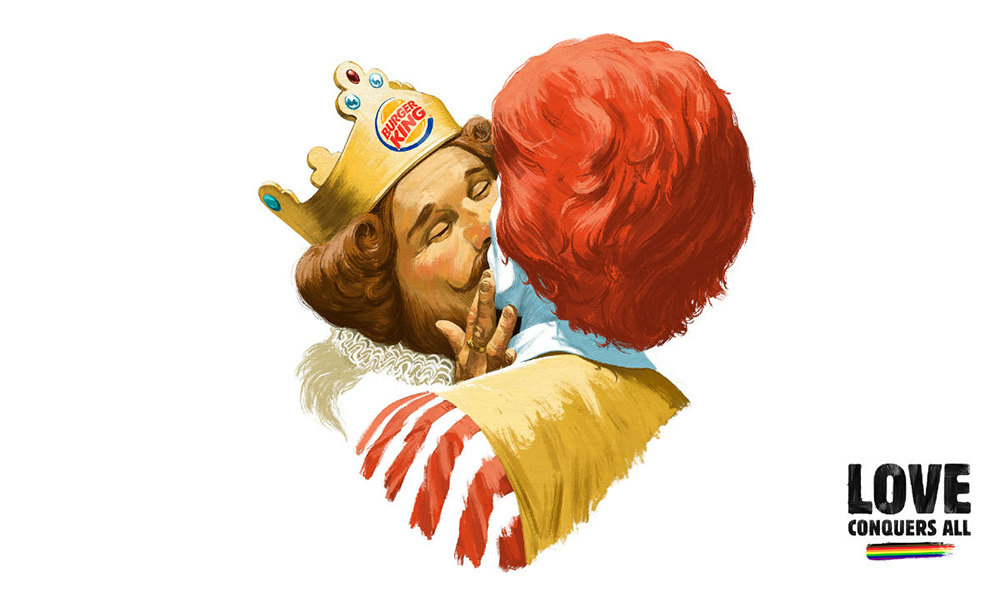 A clown and a monarch walk into a bar. Does that sound like the beginning of a bad joke or a love story waiting to happen? Trick question, it’s a marketing campaign.

In a move that could certainly be described as bold, Burger King has erected posters all around the Finnish capital to mark Pride week in Helsinki (September, 7-13). The posters depict the Burger King himself laying one on old Ronald McDonald, with the caption “Love conquers all.”

Proud to see Burger King Finland as the official partner of The Helsinki Pride. Even more proud of our 100% Corporate Equality Index. Congrats to Kaisa from the BK Finland team for such a beautiful execution. @HRC #helsinkipride2020 #helsinkipride #loveconquersall pic.twitter.com/lmQD4Waepz

“Burger King has always stood for equality, love, and everyone’s right to be just the way they are,” said Burger King Finland’s brand manager Kaisa Kasila in a statement.

“The only instance where it might not seem so is when we’re bantering with our competitor. But we want to be clear – it all stems from the respect we have for them. And we know McDonald’s stands for the values we stand for, too…”

Okay, hold up…I’m torn. I can’t deny that the person who came up with this must be feeling very clever right now, but my “rainbow capitalism” alarm bells are going off. I have a hard time understanding exactly how two brand mascots making out is at all empowering. But, I digress Kasila. Continue.

“The idea behind the painting sprung from our desire to celebrate love in all forms. We thought, what a better way to convey our values than by portraying an all-encompassing kiss between Burger King and McDonald. We wanted to show that in the end, love always wins.”

Does this actually show that love always wins, or that capitalism always wins? Maybe I’m missing something, but this seems to distract from the point of Pride, rather than celebrate it. Surely it takes more than a tokenizing poster and some rainbow wrappers to authentically engage with LGBTQ+ people? 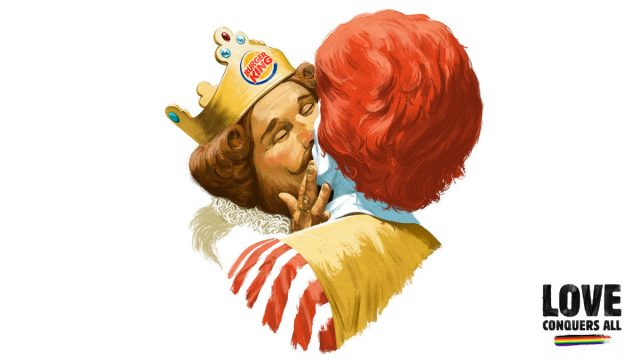 I will admit that there’s something gratifying about it. The fact that a multinational franchise can celebrate, and even market with two men kissing is something I never expected to see in my lifetime. Then there’s the fact that it’ll irritate the homophobes, which is nice.

Having said that, I’m not celebrating this particular move. I will celebrate when I see the money invested in these campaigns going directly into queer pockets. You can start by supporting the efforts LGBTQ+ folks in Helsinki are making to organize virtually and/or in small groups this week.