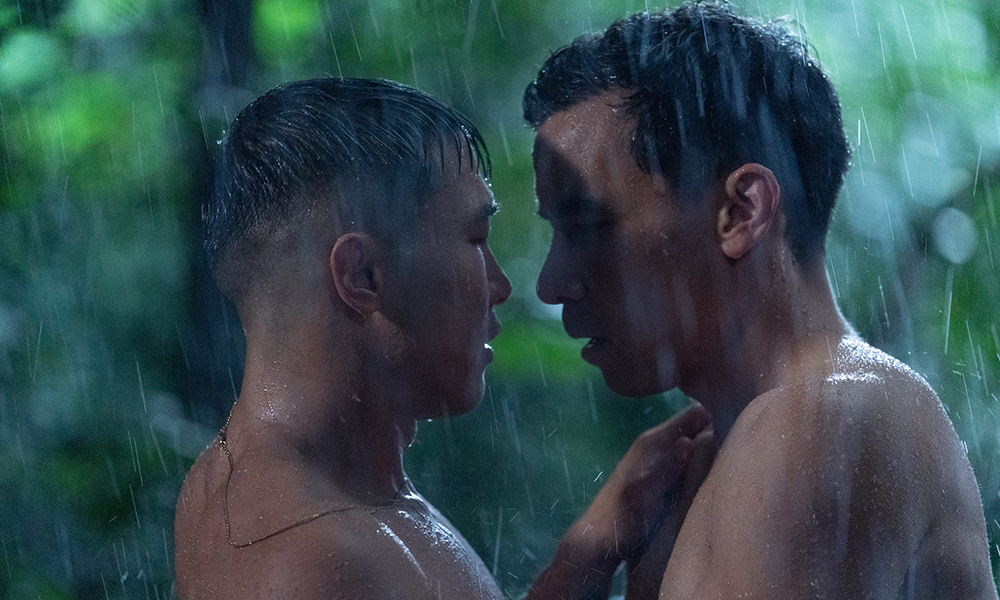 The 12 Best Gay Movies You Can Watch Now

What are the top gay movies of all time, and what makes them so memorable? We’ve curated a list of 12 incredible LGBTQ+ movies, ranging from the sweetly heartfelt to the campy and proud. Whether you’re looking for a fluffy rom-com or an arty flick, we have something to add to your watch queue.

We’ve come a long way since the days of Hollywood censorship. Today, LGBTQ+ voices have more opportunities to represent the community in incredible movies, sharing our experiences with bigger audiences. Once hampered by stereotypes and tired plots, LGBTQ+ films now come in a wide range of genres. Queer people are now beginning to see and tell a rich variety of stories on the silver screen.

In this satirical teen film, Natasha Lyonne plays Megan, a high school cheerleader who gets sent by her parents to the conversion therapy camp True Direction in the hopes of “curing” her lesbianism. During her stay in the camp, she acknowledges that she’s a lesbian. Because of her religious upbringing and rejection of her identity, Megan tries her best to “be heterosexual”.

Throughout her stay, she falls in love with Graham, another girl at camp. Megan eventually becomes more comfortable with her sexuality, even in the face of her parents’ resistance, and the film ends on a light and hilarious note. Wickedly campy, But I’m A Cheerleader is considered a classic lesbian film and is a popular pick for Pride movies.

Considered a must-watch gay film, Brokeback Mountain stars Jake Gyllenhaal and Heath Ledger as two cowboys named Jack and Ennis who develop feelings for each other. Though the two try to dismiss their emotions, their relationship quickly becomes romantic and sexual. They both marry women and struggle with their desires to be together, leading to devastating consequences.

Few lines have expressed conflicted gay yearning quite as powerfully as “I wish I knew how to quit you.” This is just an example of the powerful writing that made Brokeback Mountain such a rich romance and one of the greatest gay movies. Fair warning: have the tissue ready because this one’s a major tear-jerker.

When it comes to showing the complexity and conflict of sapphic love, few films do it as artfully as Portrait Of A Lady On Fire. Set in the 1800s, this French historical romance is directed by Celine Sciamma and follows Marianne, a painter, who is commissioned to do a portrait of the aristocratic Heloise. Heloise is set to be married off to a member of the gentry, and her mother is intent on getting this painting before her wedding.

As Heloise refuses to pose for portraits, Marianne poses as her hired companion so she can covertly paint her. The pair take daily walks along the coastline, which Marianne first takes as an opportunity to memorize Heloise’s features. But, eventually, the two fall in love and have a lesbian affair. The impossibility of their romance and their defiant love despite the odds make this film a heart-wrenching watch.

Warm, vivacious, and intimate, Paris Is Burning is an inside peek into New York’s drag community during the 1980s. An invaluable documentary, it showcases ball culture and the Black and Latinx communities that celebrated their identity through the period’s flamboyant pageants. It also explores questions of race, poverty, homophobia and AIDS, showing what its members do to survive and thrive in a rich white man’s world.

In these competitions, contestants are judged by the elegance of their fashion, drag, and dancing. The film’s footage shows the sheer talent that goes into the balls, alongside interviews of prominent members of the ball scene like Angie Xtravaganza and Pepper LaBeija. There’s an incredible diversity of gender presentations in this documentary, as well as an amazing glimpse into the roots of “voguing”.

Sometimes all we need is something light and comedic to brighten up the weekend, and Love, Simon delivers that refreshing tenderness in spades. This rom-com film stars Nick Robinson as a closeted teen named Simon Spier, who starts exchanging emails with another closeted teen in his school. Both use pseudonyms, with Simon calling himself “Jacques” as he communicates with the mysterious “Blue”.

Simon is intent on finding out who Blue is as the two bond over their online messages, and much of the movie centers on his quest to uncover Blue’s identity. However, he also gets entangled in the love lives of his friends and wrestles with the fear of being outed. All of these conflicts are carefully written and unraveled charmingly, making this a funny, timeless film to rewatch for instant feels.

Adapted from Sarah Waters’ sapphic historical crime novel Fingersmith, The Handmaiden is an action-packed film set in Japan-occupied Korea instead of Victorian England. This psychological thriller is centered on a con man’s plan to steal an heiress’ vast fortune with the help of Sook-hee, a pickpocket.

A study of codependence and regret, Wong Kar Wai’s Happy Together was groundbreaking at the time. Particularly for touching on themes of homosexuality. Ho Po-Wing and Lai Yiu-Fai, played by Leslie Cheung and Tony Leung Chiu-Wai respectively, have a tempestuous relationship. Their trip to Argentina is marred by jealousy.

Though the couple attempt to reconcile, their love can’t overcome suspicion and mutual restlessness. The film is a great exploration of youthful longing and intimacy, beautifully framed with Wong Kar Wai’s trademark stylism. It’s widely considered one of the best gay movies and foreign-language films of all time. Give it a watch if you’re in the mood for a romantic drama.

Based on the romance novel The Price of Salt, Carol tells the story of a star-crossed lesbian romance between young photographer Therese and Carol, an older woman in the middle of a divorce. Therese has a steady boyfriend, but she seems uncertain about sharing a future with him and becomes drawn to glamorous Carol.

Therese is not Carol’s first female lover, as she’s shown to have had an affair years ago with one of her friends. However, she’s conflicted about her own feelings for Therese, knowing that the latter will have to fight for custody of her daughter.

Critics have praised the deft direction of this film and the sensitive, powerful performances of Cate Blanchett and Rooney Mara. It’s a triumphant film about love at first sight and the defiance that keeps this forbidden romance alive in the 1950s.

One of the most critically acclaimed gay films in recent years, Moonlight is the ultimate coming-of-age story. The film is based on an unpublished play by Tarell Alvin McCraney. This semi-autobiographical movie examines the life of the protagonist Chiron in three different stages. It explores his childhood, his teen years, and his early adulthood.

Throughout the film, Chiron struggles to accept his sexuality. He frequently represses his identity to avoid homophobia and the scrutiny of his peers as he grows up. He also wrestles with his painful history of physical and emotional abuse as well as struggles with intimacy and his journey into drug dealing. It’s a touching portrait of Black masculinity and vulnerability – one that will resonate with many in the community who are still trying to find themselves. For this reason and so many more, Moonlight is easily one of the top gay movies of all time.

A Single Man is easily one of the best gay movies on Netflix now. This Oscar-nominated film starring Colin Firth is a tender exploration of coming to terms with heartbreak. Firth portrays George, a professor who is still dealing with the death of his longtime partner. Grief-stricken George plans to end his life and starts putting his affairs in order before his intended suicide.

In the film, his friend Charley reminisces and seeks a deeper relationship with him. George also forms an unexpected connection with his student Kenny. This stylish, beautiful film is Tom Ford’s directorial debut. It’s an affecting glimpse into a man trying to hold himself together for his last few days.

A relatively new entry, Fire Island embraces the beloved rom-com format to share the unapologetic happiness of the LGBTQ+ community. This reimagining of Pride and Prejudice starts with a group of friends having a fun, gay vacation in the sun.

Joel Kim Booster plays Noah, who develops feelings for the rich, aloof lawyer Will played by Conrad Rocamora. The film does an excellent job of fleshing out Asian gay and lesbian characters. It also discusses issues of class and ethnicity within the community. It’s one of the most heartfelt gay movies you can catch now. Pop some corn and save it for weekend watching!

While it’s unsurprising for a Broadway musical to go to film, this particular adaptation is a standout. John Cameron portrays the titular Hedwig, an East Berlin glam rocker. Hedwig is left with an “angry inch” after a botched gender reassignment operation.

Campy and charismatic, Hedwig falls in love with Tommy and becomes his mentor. Tommy, in turn, steals Hedwig’s songs to become a rock star. This leads the spurned musician and her band to shadow his tour. The film explores loneliness, individuality, and learning to own one’s heartbreak. It’s also full of electric performances, making it one of the best LGBTQ+ movies of all time.

The LGBTQ+ experience is a varied, incredible spectrum that intersects with racial, social, and economic lines. Though Hollywood still has some way to go in terms of representation and queer storytelling, much ground has been broken by these top gay movies.

Watch these films to laugh, cry, and feel closer to the community. There’s much to celebrate and plenty to learn from these different perspectives!

The 12 Best Gay Movies You Can Watch Now