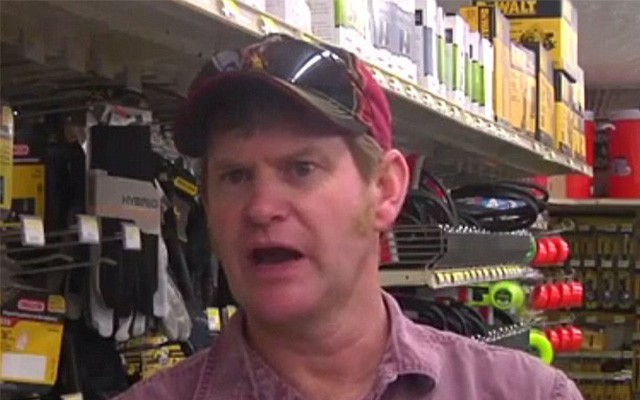 So much for southern hospitality. A hardware store owner in Washburn, Tennessee has been making headlines for his extreme beliefs regarding the gay community, beliefs he is opening sharing … and selling.

The homophobic store owner, Jeff Amyx, recently spoke with Knoxville new station WATE 6-TV about his opinion on being gay. Amyx says, “I just don’t agree with their lifestyle.” We bet he wouldn’t be saying that if there were a large lesbian population in Washburn, he’d never sell another hammer again. J/K calm down! But seriously, this guy isn’t having the gays, he’s gone as far as posting signs and selling “No Gays Allowed” apparel, which is appalling, both aesthetically and morally. At the low-down price of $5 you too can sport a “No Gays Allowed” hat or “Choose: God or Gays” bumper sticker, which we find extremely poetic.

He’s capitalizing on equality, but he needs to make money somehow to pay for his Sean Cody subscription which is undoubtedly expiring soon.

So, if you’re in the Washburn area and needing nails, look for the big No Mo’ Mo’s sign in the window.