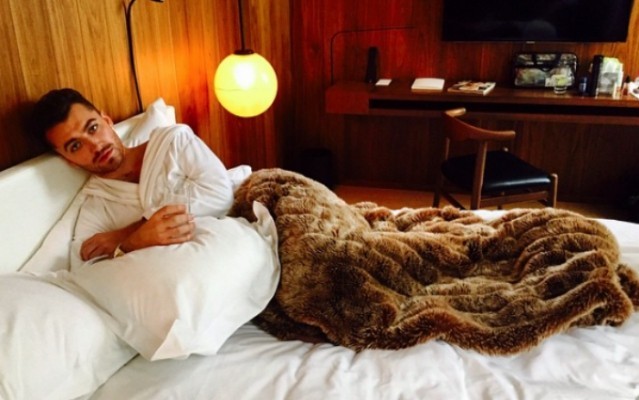 Sam Smith is helping James Bond go gay in a great way. With the newest James Bond film (slated for a November release), many fans of the franchise have been speculating about which singer will serenade them with Spectre‘s theme song.

For the first time ever, a gay man will belt the James Bond theme for the soundtrack. Talk about progressive! British singer-songwriter Sam Smith has been recruited to lend his voice for the upcoming film. The song entitled “Writing’s on the Wall” is scheduled for release September 25, more than a month before the film’s premiere.

Earlier today Smith posed sprawling on his bed in an Instagram photo captioned, “Practicing to be the best Bond girl I can be.”

Practising to be the best Bond girl I can be

Hey, you never know, a gay Bond guy might be right around the corner.

In a recent press release, Smith acknowledged what an honor it was to be selected for the Spectre theme.

“I am honored to finally announce that I will be singing the next Bond theme song. I am so excited to be part of this iconic British legacy and join and incredible line up of some of my biggest musical inspirations.”

We know you’ll kill it, Sam! If not, maybe Daniel Craig can punish you, long and hard.