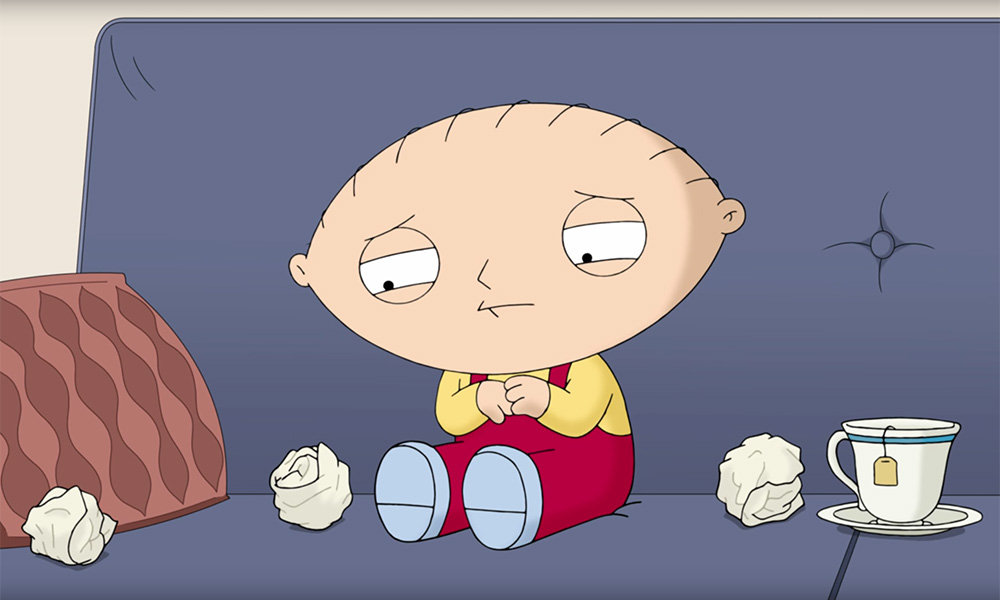 In the latest episode of Family Guy, Stewie Griffin finally addresses his sexuality.

Stewie Griffin made a surprising revelation in the latest episode of Family Guy — titled Send in Stewie, Please. In the episode, the one-year-old meets with his psychologist Dr. Pritchfield, voiced by Ian McKellen, to discuss his sexuality.

“I only pushed Tyler down the stairs because I like him and I’m afraid he won’t like me back,” Stewie told Dr. Pritchfield. “And not like him, like him. I’m not gay. This whole thing isn’t because I’m gay so calm down, I can already see you licking your chops. I’m sure you live for the ‘coming out’ sessions.”

He continues, “If anything I’m less gay than I used to be. Not that anybody at this school would care. But do I think Grant Gustin and I would make the most adorable Instagram couple? Yes, yes we would.”

“Grant Gustin plays The Flash on The CW if you were wondering because you know most people over 70 probably don’t know who he is. Think young Anthony Perkins.”

“Anyway, fluid is something I hear being tossed around,” he said. “But I’m confident in my heterosexuality. That’s a word, right?” Dr. Pritchfield affirms his usage of the word “heterosexuality, and Stewie responds, “Ok. It just sounded strange for a second.”

By the end of the episode, it’s obvious Stewie’s sexuality will remain as ambiguous as ever, but the tyrannical tike makes an equally exciting announcement. His trademark British accent is fake, and he truly sounds a lot like the rest of his family.

Gary Janetti, who wrote the episode, told The Daily Beast, “It wasn’t anything that was planned at all in any form.”

As for labeling Stewie’s sexuality, Janetti revealed the episode denotes an extraordinary moment in the character’s life.

“Stewie’s extremely intelligent. When he walks into the room, within a second he identifies that therapist as gay,” Janetti stated.

“And the way he acknowledges that is when he says to him that this isn’t a coming out session and I’m sure you lick your chops every time you get one of those.”

“I’m not being defensive, but … I think he’s seeing an opportunity to say, ‘This isn’t easy. What you think this is going to be, it’s not. It’s not as actualized.’”