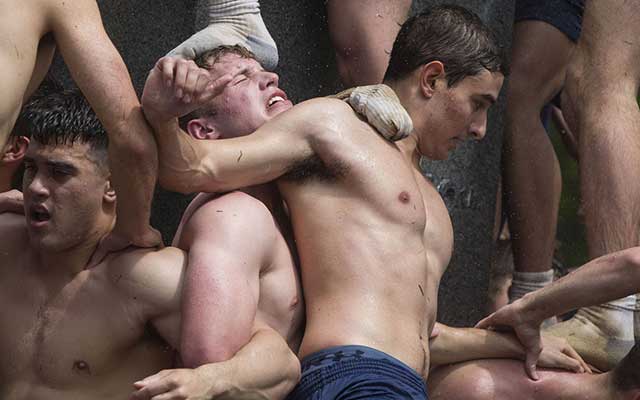 Annapolis, Maryland is home to an annual event in which participants climb the Herndon Monument (a 21-foot-tall gray granite obelisk). The monument honors Captain William Lewis Herndon, who willingly went down with the SS Central America when it sank in 1857.

This year, hunks from the Naval Academy decided to scale the lubed up statue shirtless. It reportedly took them one hour, 12 minutes and 30 seconds to mount the monument.

The Capital Gazette reports: “For decades, the Herndon Climb has marked the end of plebe year for midshipmen. It is the culmination of everything they’ve learned about teamwork. They must form a human pyramid to scrape away at the vegetable shortening covering the monument, remove a ’Dixie cup’ hat from the top of the structure and replace it with an upperclassman’s hat.”