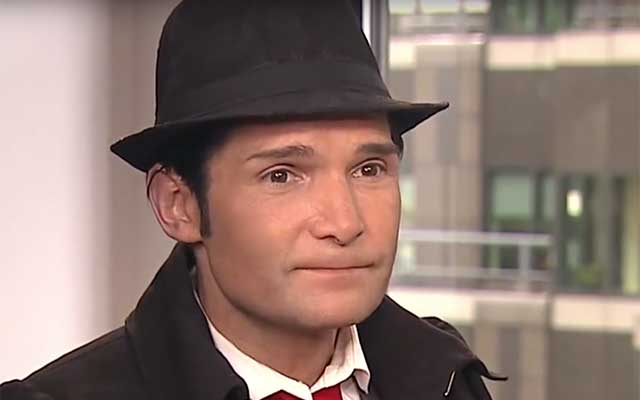 Ex-child star Corey Feldman (Goonies, Lost Boys) opened up to Hollywood Reporter about the past and present pedophilia in the film and TV industry.It included late night parties held by producers who supplied pre-teen boys with drugs and alcohol — they’d later rape them.

Feldman’s best friend Corey Haim was also a child star. Back in the day, they were known as the “Two Corey’s.” According to Feldman, Haim was raped by a very well-known Hollywood producer.

“[These men] were passing [Haim and me] back and forth to each other. [Alison Arngrim] from Little House on the Prairie said [in an interview], ‘Everybody knew that the two Coreys were just being passed around.’ Like it was something people joked about on studio lots … I know every single person that interfered with [Haim’s] life, and he knew every person that interfered with mine.”

Later in life, the two best friends appeared in an A&E reality show called The Two Coreys. Haim ended up dying from drug-induced pneumonia. He had suffered from drug addiction most of his life, more than likely due to childhood trauma:

“[Haim] had more direct abuse than I did. With me, there were some molestations, and it did come from several hands, so to speak, but with Corey, his was direct rape, whereas mine was not actual rape. And his also occurred when he was 11. My son is 11 now, and I can’t even begin to fathom the idea of something like that happening to him. It would destroy his whole being. As I look at my son, a sweet, innocent, 11-year-old boy and then try to put him in Haim’s shoes, I go, ‘Oh my God — well, of course, he was erratic and not well-behaved on sets and things like that.’ What more could we expect of him? Everybody deals with things differently.”

Nowadays with Instagram and Twitter, adult males in the entertainment industry have a wider landscape to prey on young boys behind closed doors. And yes, it still happens. According to Feldman, more than ever:

In California, the statute of limitations prevents Feldman from coming forward and naming those who molested he, Haim and many other child actors. If he did, he would be the one with legal problems, and he would be sued.

“We should be talking to the district attorneys and the lawmakers in California, especially because this is where the entertainment industry is and this is a place where adults have more direct and inappropriate connection with children than probably anywhere else in the world … If somebody came forward with a suit against one of these people [who molested me], I would certainly be more than happy to back them up. But that hasn’t happened.”

In the 2015 documentary Open Secret, filmmakers discuss the men who threw huge Hollywood parties where boys were being raped at gunpoint and forced to do cocaine. Feldman didn’t confirm or deny this was happening but did say these parties were meant to “groom” boys for future situations where rape could be inevitable.

“I believe that Haim’s rapist was probably connected to something bigger, and that is probably how he has remained protected for all these years. This person uses intimidation and threats as a way to keep people quiet. And all these men were all friends … They would throw these parties where you’d walk in, and it would be mostly kids, and there would be a handful of adult men. They would also be at the film awards and children’s charity functions ….

The range was usually 10 to 16 years-old. The lure for kids is that they work in the adult world. All of their friends become adults, and they very rarely get to interact with other kids, especially because they don’t go to school. So unless you happen to be in a movie like Goonies, where there are seven kids, for the most part, you find yourself being the only kid on the set. You don’t get that interaction, which you crave so badly. So when somebody approaches you and says, ‘Hey, this is a Hollywood party where you get to hang out with the powerful people in Hollywood,’ well that sounds like a great opportunity ….

That’s the networking and that’s when you become pals with them and you get their phone numbers and you get their mom’s phone numbers and the next thing you know they talk to the moms and say, ‘Hey, I want to take Corey out to an event, this would be great for him, let me pick him up and take him.’ And they turn that power over right away to the publicist or the photographers.”

In the case of one of the most successful child stars ever, Elijah Wood, his mother would never allow him to go to these parties, but in Feldman’s case, his parents didn’t seem to care. In fact, one of the primary molesters worked for his father and acted like Feldman’s guardian and chaperone.

“Part of the time I was living with my mom, and she was letting me go to the parties. And then the other part of the time was with my dad and those people were coming over to my apartment … my father hired this man, and this man coaxed me into trying every single drug that I ever tried … as a child, you don’t really [tell your parents]. My parents were both very abusive and very selfish and were more interested in what was happening with themselves than what was happening with my life.”

Feldman also explains about his relationship with Michael Jackson, saying that he was a friend, and their relationship didn’t end well. He explains more in his book Coreyography: A Memoir.

“We had a falling out, and that was because there was a dark side to him. But that dark side in no way connected itself to pedophilia by my estimation.”