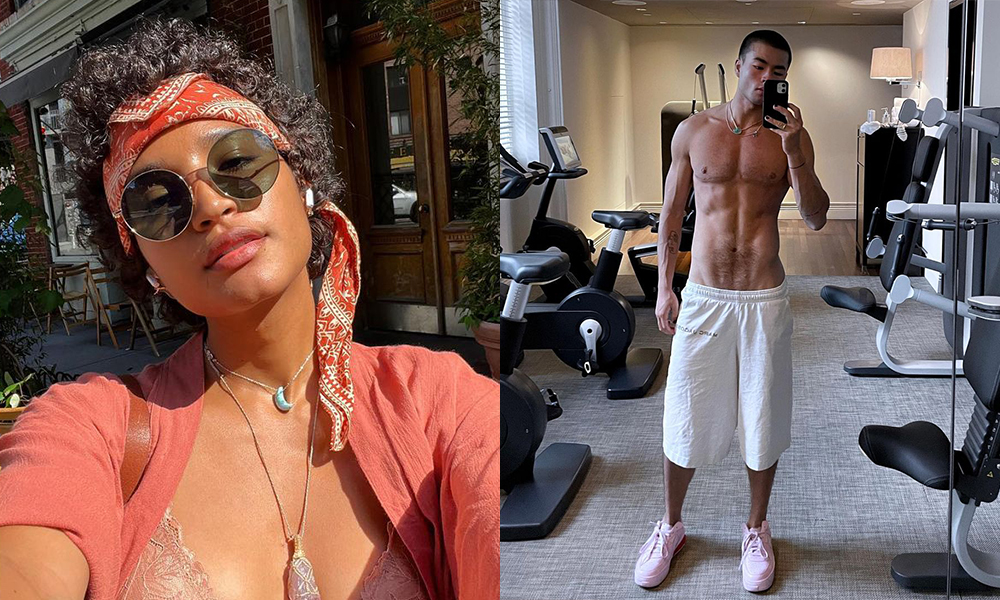 Non-binary Actors In Hollywood & Their Stories

There’s still so much progress to be made in terms of acceptance when it comes to trans and non-binary people. With anti-trans laws currently being pushed at all levels of government, it is a tense time to be trans and non-binary. But, despite the increasing social tensions, these celebrities are living their best selves as non-binary actors. They show us that pride is just as important today as it was in the time of Stonewall.

Learn more about these prominent non-binary actors in Hollywood and how they came to accept their gender non-conforming identities! 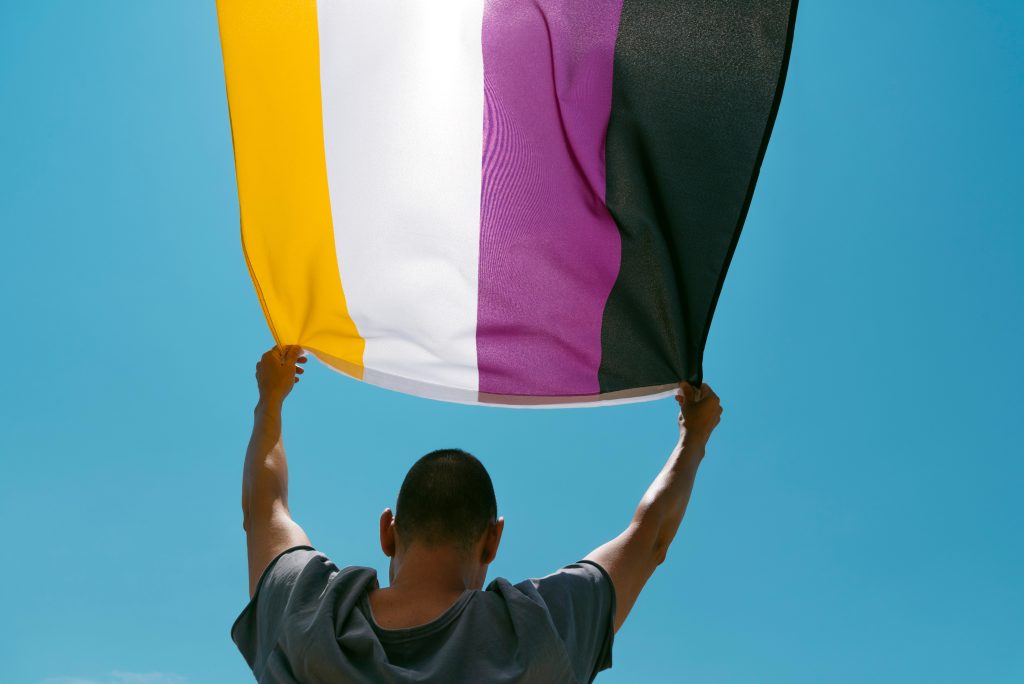 Stenberg was named Time Magazine’s “Most Influential Person Of The Year” in both 2015 and 2016. They were also featured by Dazed on its 2015 cover. An activist and a non-binary actor, Stenberg made her breakthrough in portraying Rue in The Hunger Games in 2012. Since then, she starred in Everything, Everything alongside Nick Robinson. She also had a critically acclaimed role as Starr Carter in The Hate U Give.

Recently, Stenberg starred in indie-horror Bodies, Bodies, Bodies, which became an instant hit with audiences, making $13.6 million at the box office. Beyond acting, Stenberg is an advocate for LGBT+ rights and was even named “Feminist of the Year” by the Ms. Foundation For Women in 2015.

For her role as Angel Evangelista in FX’s POSE, Moore landed on Time Magazine’s “Hundred Most Influential People In The World”. They began working shoots for luxury brands Dior and Gucci when they were just 15 years old.

Since then, Moore, who uses she/they pronouns, has both acted on film and television. She’s also gone back into modeling as well, signing with IMG Models and William Morris Endeavor (WME) and becoming the first trans model of the latter agency.

Moore has also started their own production company called Beetlefruit Media, which aims to support films created by artists from disenfranchised sectors.

A prominent figure within the New York City drag scene, Bob The Drag Queen was the winner of RuPaul’s Drag Race season 8. Bob, who goes by he/him and she/her pronouns, has ventured into other careers since winning the reality television competition.

One of her biggest accomplishments in the drag realm was being the first black Drag Race contestant to hit 1 million followers on Instagram following her win in 2016. Her HBO show, We’re Here! (with fellow Drag Race alumni Shangela and Eureka O’Hara), also became a hit with both audiences and critics, winning the Primetime Emmy Awards for Outstanding Costumes and Outstanding Makeup for a Variety, Nonfiction, or Reality Program.

Beyond this, Bob The Drag Queen also ventured into the music industry with her song “Purse First” and later collaborated with fellow alumni Alaska Thunderf*ck on “Yet Another Dig”.

Bob The Drag Queen also co-founded Black Queer Town Hall, an online event that celebrates and advocates for black queer voices, with fellow Drag Race alumni Peppermint.
Bob has been open about their sexuality online. “For the record, I identify as pansexual and non-binary,” she tweeted on October 7, 2019.

The most recent winner of All-Stars season 7 – the show’s first all-winners season – Jinkx Monsoon is a drag performer, musician, comedian, and non-binary actor. Monsoon, who goes by they/them pronouns, recently had a role in Netflix’s Happiest Season alongside fellow Drag Race alumna BenDeLaCreme.

Since their first win back in 2013, Jinkx Monsoon has toured around the US with fellow Drag Race contestants for Battle Of The Seasons, a global Drag Race tour that spanned from 2014 to 2016. They have also lent their voice to a few animated characters after Drag Race, notably Emerald from Steven Universe and Jenna from Bravest Warriors.

Monsoon stated that they identify as non-binary. In an interview with Hey Qween, they said, “I’ve never identified as fully male. I’ve always identified as more gender fluid or gender ambiguous, but I never knew the vocabulary to explain it for myself.”

A musician, drag performer, and activist, Shea Coulee was the runner-up of season 9 of RuPaul’s Drag Race, as well as the winner of All-Stars season 5. The Chicago drag legend, who uses she/her pronouns in drag and they/them pronouns out of drag, has released music, including her singles “Cocky” and “Feeling So” in 2017.
Coulee has also played roles in a variety of films and television shows and guested on shows such as The Kelly Clarkson Show, The View, and Bachelorette. The drag queen is set to appear in Marvel’s Ironheart series in a yet-unnamed regular role.

In 2020, she was featured in the third fashion show for Rihanna’s lingerie brand alongside Drag Race alumni Jaida Essence Hall and Gigi Goode. Coulee has also been a staunch activist for racial equality, especially within the drag community.

Coulee opened up about her identity in an interview with Them. “At least for me in my personal life, being non-binary is just a lot easier. It feels less forced…Once I started to use drag as gender performance, to study that and understand my identity through that, I feel now that being a gender non-binary person occupying drag spaces is freeing.”

Best known as the grooming expert on the Queer Eye reboot, Jonathan Van Ness (a.k.a JVN) is a television personality and internet celebrity.

Before appearing on Queer Eye, Van Ness (who goes by they/them pronouns) was known for their role in the hit parody series Gay of Thrones, which aired on FunnyOrDie from 2013 to 2019. Since then, they’ve guested on other shows such as the reality television series Nailed It! and voice-acted in cartoons such as Big City Greens and Big Mouth.

Vico Ortiz is a Puerto Rican activist, drag king, and non-binary actor. Ortiz, who uses they/them pronouns, is most known for their role as Jim Jimenez. Jimenez is a non-binary character in the queer comedy Our Flag Means Death. They had a recurring role in The Sex Lives of College Girls in 2021. They also starred in American Horror Story in 2019.

Ortiz said that their queerness “has given [me] a lens to see how things are affecting all of us of every walk of life.”

Erika Ishii is a voice actress and internet personality. They are most known for voicing Valkyrie in the battle-royale shooter game Apex Legends. Ishii, who goes by she/her and they/them, is openly genderfluid and pansexual.

They have appeared in various web shows, such as L.A. by Night and Critical Role. You can also find Ishii in other shows produced by Dimension 20. These include Fantasy High: The Seven Maidens, Coffin Run, Game Changer, and Dirty Laundry, to name a few.

She was also the host and producer of Geek & Sundry, a commercial YouTube channel that mainly featured nerd culture content.

Klaus got their first breakout role as Bullet on AMC’s The Killing, which aired in 2013. Since then, the non-binary actor and internet personality also starred in the superhero television series Arrow as Cindy or Sin. They then played Audrey Jensen in Scream, an anthology slasher series. They also had a recurring role voicing Pidge in the animated show Voltron: Legendary Defender.

Klaus spoke to The Hollywood Reporter about their gender identity. “I am not of the binary,” they said. “I am something else.” Klaus said that it allows them “room to learn and find a more pinpointed label” if they so choose. “And it does also mean for me being non-binary I get to explore and experiment and experience anything at my fingertips […] It feels open and free in a way that I never felt.”

Chella Man is most known for sharing his story as a deaf, transgender person of color online. Notably, he also hosted a TedX Talk about his gender transition journey.

His breakout role was as the deaf superhero Jericho in the DC Universe series Titans. He was awarded the Out100 by GLAAD and featured in Dazed magazine’s top 100 ranking at #10. Man was also awarded the Hero Award by Attitude.

We need transgender and non-binary representation now more than ever. These celebrities and artists living their truth is a much-needed message for trans youth everywhere. There is still a long way to go in terms of trans and non-binary identities being accepted and protected. However, it is undeniable that these people are changing the game in Hollywood.

Non-binary Actors In Hollywood & Their Stories