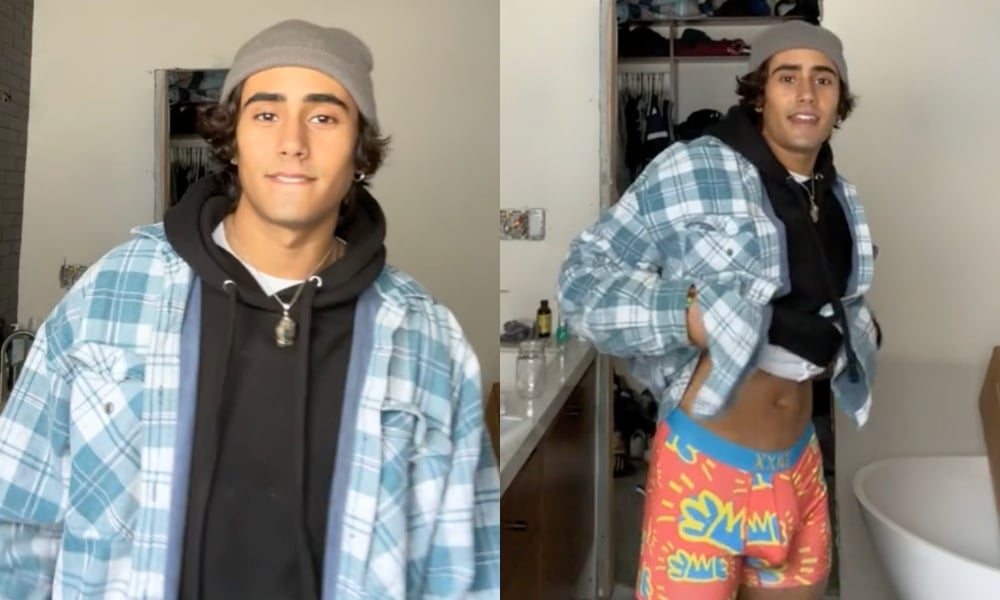 Michael Cimino Takes Over TikTok In His Boxer Briefs

Since Hulu’s Love, Victor ended earlier this year, we’ve been seriously deprived of Michael Cimino content. But don’t worry, the actor’s latest TikTok video is here to fix that.

In the video, Cimino is wearing a hoodie, a flannel, and a beanie — as if he is about to go brave the chilly LA weather. But we learned while watching this video to expect the unexpected.

“Hey. What’s going on?” Cimino asks his viewers as he slowly backs away from the camera.

“I bet you didn’t know that I didn’t have pants on,” he says while lifting up his jacket to show off his bright orange and blue form-fitting boxers. Let’s just say very little is left to the imagination.

@itsmichaelciminoHaha I got you I bet♬ original sound – Michael Cimino

One TikTok user hilariously commented, “You going somewhere? I see you’re packed.” We could not have said it better ourselves.

This is not the first time the actor has left his followers thirsty. Earlier this month, he dropped a shirtless photo on his Insta story showing off his muscular physique.

In addition to thirst traps, Cimino has also been promoting his latest EP, “I’m somewhere out there,” and it’s accompanying music video.

“Music has always been a passion of mine and I honestly just hope that this EP means something to you guys like it does to me,” he wrote on Instagram. “So please give it a listen it would mean the world. And, if you’re feeling crazy, show a friend or two.”

Cimino played Victor in the Hulu sequel series to the beloved LGBTQ+ film, Love, Simon. It follows Victor as he embarks on his journey at Creekwood High School as he juggles challenges at home, adjusting to a new city, relationships, and discovering his sexual orientation. All three seasons are streaming now on Hulu.

Scroll for more hot photos of Cimino to quench your thirst.

Michael Cimino Takes Over TikTok In His Boxer Briefs