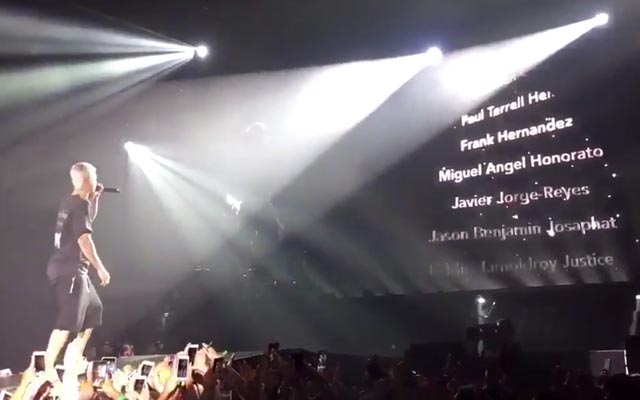 Bad boy Justin Bieber proves he’s got a good heart by honoring his LGBT brothers and sisters. On June 30th, while in Orlando for his Purpose World Tour, Bieber sang a tribute to the individuals who lost their life during the Pulse nightclub shooting.

During his somber performance of “Purpose,” the singer stood watching with the audience as 49 names rolled by on a massive monitor, a name for each victim.

This was such a beautiful moment. @justinbieber rolled the names of the Pulse victims + Grimme. #OrlandoStrong pic.twitter.com/5ZntyAEx7A

Related: Skittles Gives Up the Rainbow for LGBT Pride

Bieber told the audience: “You’ve been through a lot here, and my heart goes out to all the families. You can’t take down Orlando!” Then later posted “Thank you for tonight. Don’t ever be afraid to be yourself #OrlandoStrong,” as the caption to an Instagram photo.

Thanks for the support, JB. We are all #OrlandoStrong.

Thank you for tonight. Don't ever be afraid to be yourself. #OrlandoStrong pic.twitter.com/ezvQT2g4nk