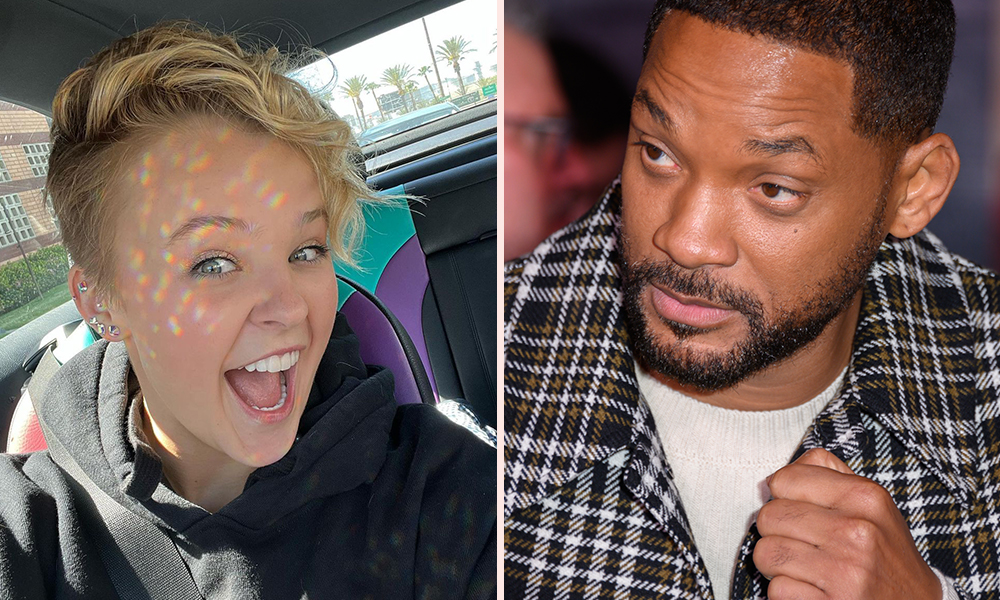 JoJo Siwa to No Longer Star in Will Smith Movie ‘Bounce’

Fans excited to celebrate JoJo Siwa’s feature film debut will be disappointed to hear that she has exited the Will Smith-backed YA movie. Siwa secured her status as an LGBTQ+ icon when she came out publicly in early 2021. Since then the star has been living her best pansexual life.

Unfortunately, this particular project wasn’t meant to be. Based on the book of the same name, Bounce is a story of a girl who wishes she could trade her family for a new one. This body swap story also takes place on Christmas Eve, meaning it would have been the perfect holiday movie. Siwa was set to play the lead, who “bounces” between different lives, reliving Christmas Day over and over. We’re thinking Freaky Friday meets Groundhog Day meets It’s a Wonderful Life.

The movie would have been produced by Will Smith and Caleeb Pinkett, Jada Pinkett’s brother. According to a Variety report, Siwa is no longer attached to the project, and the project itself has been removed from Paramount’s development slate. The project fell apart months ago, says Variety, and is unrelated to Smith’s Oscar’s slap. “That project got put on hold, and then went away,” Siwa said at the GLAAD Awards. “It wasn’t the one.”

Related | JoJo Siwa Opens Up About Dating Someone New

Siwa also made it clear that her exit has nothing to do with what happened at the Oscars. “I normally stay out of all politics, it’s not my gig,” she said. “But I will say that being kind to one another is very important. I think that can go both ways, kindness.” Fans don’t have to be too upset, because they can still look forward to the upcoming season of So You Think You Can Dance where Siwa will be a judge.

Siwa also made an appearance on the Rachel Uncensored podcast with her close friend Rachel Ballinger. There she confirmed that she is now “exclusive” and dating a new person, though she didn’t name any names. “We’re not single,” Siwa said. “I say ‘we’re’ because it’s me and my multiple personalities within myself,” she joked. “I am not single and I don’t want to mingle. No, I’m a loyal lady.” She talked about briefly considering adding a lock emoji to her bio to communicate her exclusivity. “I went around the block,” she continued. “I did, and I tried a lot, and I learned a lot and I’m very, very, very happy where I am now.”

In other gay AF news, the star recently broke the gay internet when she cut her iconic hair short, saying goodbye to the ponytail. She’s even rocking the shaved sides. “Mayyyyy have done something todayyyy,” she wrote on her Instagram. The singer turns 19 this May and we think this look is particularly well suited to carry her into the last year of her teens. They grow up so fast.

JoJo Siwa to No Longer Star in Will Smith Movie ‘Bounce’