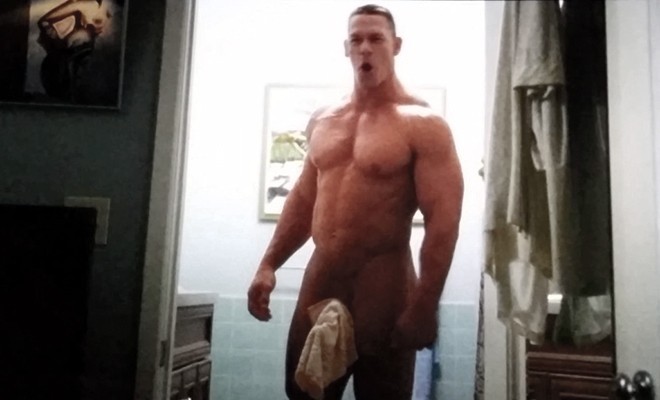 WWE wrestler John Cena got naked from Trainwreck and sported a stunt penis.

In a recent interview with Today, Cena talked about filming his Trainwreck sex scenes with Amy Schumer. If you haven’t seen the film, you should know that Cena is nearly naked for most of his time on screen. To paint you a visual, for a moment, Cena stands in a bathroom sporting a washcloth over his semi-erect stunt penis. He told Today:

“I think those who see the movie will agree with you—that scene is extremely awkward. And it’s designed that way. It’s designed to be the most un-intimate environment. It was unbelievably awkward, but that’s cool because it actually shows.”

In the film, Cena plays Schumer’s non-exclusive and unofficial boyfriend. In perhaps the most memorable scene in the film, Cena mounts Schumer’s character and proceeds to talk “dirty” to her. The scene climaxes with a strangely homoerotic moment and ends with John Cena standing in the bathroom.

Watch the clip below for more John Cena!